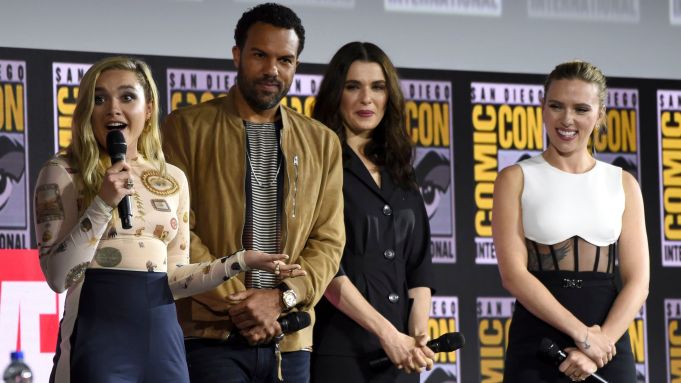 Marvel’s “Black Widow” has only been in production for a month, but studio president Kevin Feige still delivered the goods for fans at San Diego Comic-Con on Saturday.

Filmmakers brought an intense sizzle reel of on-location shots, kicked off by a dazzling and bone-crushing fight sequence between lead Scarlett Johansson and her on-screen sister Florence Pugh.

While unconfirmed, the narrative seems to be a prequel to the events of “Avengers: Endgame,” which ended on a fateful note for Johansson’s Natasha Romanoff (aka Black Widow). Her standalone film sees the assassin in Budapest, where she tracks down Pugh for a violent reunion. The women go head-to-head with guns and knives, destroying a lovely mid-century kitchen along the way.

The confrontation ends with Pugh laying out two shot glasses and popping the top off a bottle of what we  presumed to be Russian vodka.

“I’m looking forward to exploring her as a fully realized woman in all of her many facets,” Johansson said on stage in Hall H. While she’s played the part in numerous films, this will be her first marquee outing in the role. Also on board is Oscar winner Rachel Weisz, “Stranger Things” star David Harbor and “The Handmaid’s Tale” star O. T. Fagbenle.

While fleeting, thousands of fan cheering in the dark also got the first glimpse at the antagonist “Black Widow,” the formidable Taskmaster. A masked villain who rocks a shield, the Taskmaster’s deadly gifts include mimicking the moves of his opponents in real time.

The film is directed by Cate Shortland and set to hit theaters on May 1, 2020.