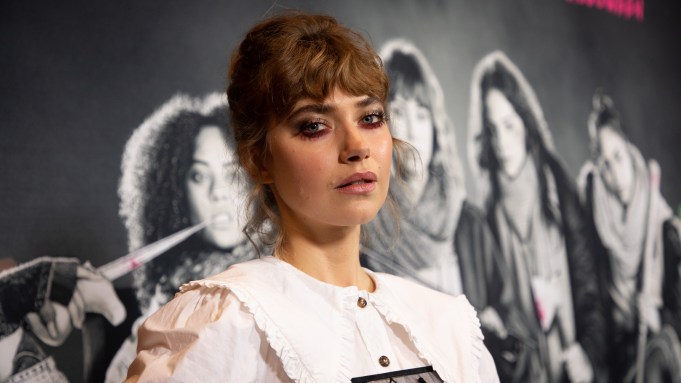 “Black Christmas” is the second remake of the 1974 slasher classic, which centers on a group of sorority sisters stalked by an unknown murderer. While the original had the female protagonists (SPOILER) offed, in this one, the women fight back.

“It’s been called a re-imagining of the original, and I think, in ways that the original was perhaps progressive for its time, [ours] is talking to the current audience now. There seems to be a really great opportunity to have a mainstream woman’s voice about crucial issues,” says star Imogen Poots.

Poots says working on a set of mostly women — from the cast to writer/director Sophia Takal and writer April Wolfe — allowed for candid conversations about those issues, including misogyny and violence against women, particularly on college campuses. The film also stars Cary Elwes, Aleyse Shannon and Lily Donoghue.

“There are moments that our director, Sophia, decided to pay homage to,” says Poots. “But at the same time, the characters are totally different and the story, even though it takes place in a fraternity and sorority [on an] American campus, it’s really got a whole new emotional root.”

Poots plays Riley, a sorority member dealing with her own past trauma. The British actor has starred in other genre fare, including “Green Room” and “28 Weeks Later,” and says while the film is female-driven, it’s hardly aimed at a female audience exclusively. In fact, Poots encourages male horror fans to watch.

“I think it’s important for for men to see the story. I mean, why not? What’s wrong with watching female performances? That’s what it comes down to, ultimately,” says Poots. “It’s for an audience who will appreciate the film and the message.”