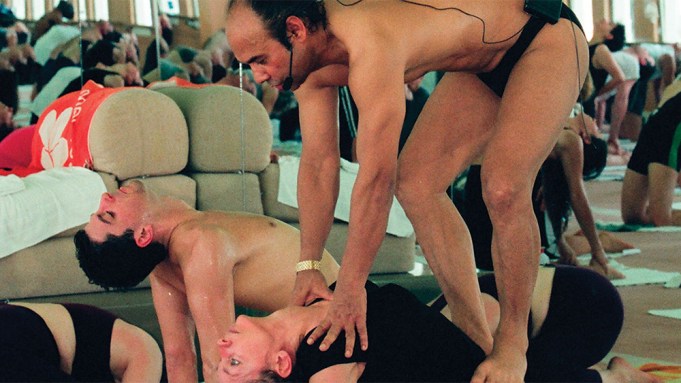 The director of a harrowing new Netflix documentary about the guru who brought hot yoga to Beverly Hills in the 1970s is asking California lawmakers to reopen a criminal sexual assault case against him.

Eva Orner debuted “Bikram: Yogi, Guru, Predator” in the official selection at Toronto on Monday, which details the rise and disgrace of Bikram Choudhury — a megalomaniac who charmed luminaries like President Richard Nixon, Shirley MacLaine, and Michael Jackson with his tough-love yoga series practiced at temperatures over 100 degrees.  He is also accused of rape, sexual assault and other abuse by students and followers in the film. He fled the country in 2016 and lives in India.

Orner sat for an interview at the Variety studio and made a direct appeal to California Governor Gavin Newsom to help bring the case back to life.

“We have a great governor in California, Gavin Newsom, I’m sure he watches everything on Netflix. Hopefully he will watch this film, call [Los Angeles District Attorney] Jackie Lacey and tell her to reopen the case, go after him criminally, get him extradited, and he will have to face the music,” Orner said.

While Orner noted that rape and assault charges have yet to be investigated while Choudhury remains a fugitive evading investigation, a civil judgement against him from a former female general counsel was awarded for the sum of $6.4 million.

“He’s been convicted civilly of wrongdoing. There’s a string of women that have settled and either claimed that he raped or sexually abused them. He needs to come back,” she said.

Orner also called on Hollywood’s influential fitness community to strip the guru’s name from the studios he helped launch decades ago.

“The big takeaway from this is, there’s still a lot of Bikram studios. People should go to hot yoga studios. No one should have his name on their studios, he’s a rapist and an abuser and a predator,” she said, encouraging businesses to use generic names to denote the style of yoga.
Netflix has not yet set a streaming premiere date for the film.