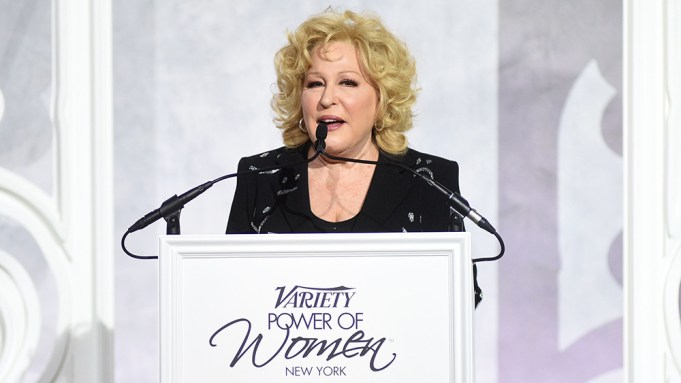 “I figured it out early: if you didn’t get cast, or didn’t care to play the game, you’d better figure out how to put on your own show.” Words to live by from Bette Midler.

Beginning by singing a bit of “There’s No Business Like Show Business,” the Broadway star and actress revealed the inspiration behind her famous personality — the Divine Miss M — at Variety‘s Power of Women NY event presented by Lifetime.

“Nowadays everybody calls our work ‘the industry.’ I call it ‘the biz,’ or ‘the business,’ because I’m old school and I’ve always, always been riveted by the feuds, the fights, the hits, the misses, the disses, the slights. Despite what the song says, as we all have come to realize, everything about it is not appealing.” She continued, revealing that if no one was going to cast her in a production, any production she would simply have to do it herself.

Instead of waiting for a job to come, she carved her own path, and has been working steadily for 50-plus years now. The multihyphenate has garnered three Grammys, three Emmys, four Golden Globes, and a Las Vegas residency from 2008 to 2010. After earning a special Tony in 1974, she received a competitive one in 2017 for “Hello, Dolly!,” moving her one step closer to being an EGOT winner. She has sold more than 30 million records worldwide, and has four gold, three platinum, and three multi-platinum albums to her name.

Joking that although she was being honored on Friday, her career has been “splattered with trash,” an easy transition into the charity she also started, helping to clean up New York City’s parks and gardens.

Midler founded the New York Restoration Project in 1995 to restore neighborhoods in the five boroughs by planting trees, picking up litter, building gardens, and reclaiming green spaces. Since then, the nonprofit has rooted 1 million trees, removed 5 million pounds of trash, and rehabilitated 80 acres of parks. The beautification has also impacted crime in the areas. One study shows that East Harlem had 213 fewer felonies per year after the NYRP added 1 million square feet of green space to the neighborhood.

Midler explained that the principle of caring for the environment was ingrained in her from birth in Hawaii.

“I have always picked up trash. I was born in Hawaii, when it was a pristine territory, and it was considered a sin to defile the land with so much as a gum wrapper.” She brought that practice with her to New York City, where she joked, “I’m the Marie Kondo of the outdoors! Because make no mistake, I love nature despite what it did to me.”

And Midler brings her resiliency to her charity work. When asked why she wanted to clean up some of New York’s most neglected areas, her answer was simple: because it needed to be done.

“I refused to accept the status quo and refused to ignore what was so clearly unfair. And that, to me, is empowerment.”

“[We have] become a nation that serves a few, while ignoring the anguish of the many. I often think to myself, in the middle of the night, where will this unfairness lead? Will it lead to revolution? Will it lead to ruin? Will it lead to the end of democracy?” she went on. “Will we all wind up in a bad ‘Mad Max’ movie, caked in dust with bad hair and wearing skunk?”

But Midler takes solace in the fact that when women raise their voices against the injustice we see every day, “I know in my heart that the ground will shift and we will see common ground again. That’s what I think empowerment is.”