Continue to Variety SKIP AD
You will be redirected back to your article in seconds
Feb 11, 2019 7:00pm PT

Slick Woods, Rihanna’s Muse, on Appearing in ‘Goldie,’ Her Debut as a Movie Actress (EXCLUSIVE) 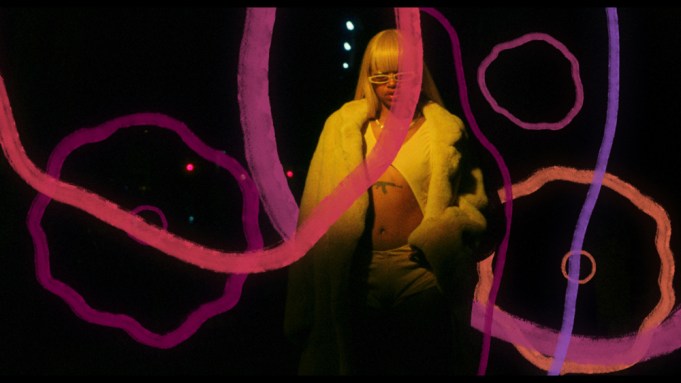 Courtesy of the Berlin Film Festival

Slick Woods, Rihanna’s favorite fashion model, makes her feature film debut as the lead actress in Sam de Jong’s “Goldie,” which world premiered Sunday in Berlin’s Generation 14plus section. She found filming 21 days straight “hard work” and a “crazy experience,” but enjoyed it, although she did have to sacrifice her 21st birthday, she tells Variety.

“The work hours were long, but I was blessed with a role that was very similar to myself, so it wasn’t much like work at all,” she says, speaking on the phone from New York, where she is much in demand during the city’s Fashion Week and was unable to attend the film’s Berlin premiere. “I don’t even feel like I was really acting. It was more like playing out scenes in my life that I didn’t necessary want to touch on over again, so it was kind of like therapy.”

Woods plays rebellious 18-year-old New Yorker Goldie, who has to fight to keep child welfare services from separating her from her younger sisters after her mother is imprisoned for drug dealing, while also trying to clinch a role as a dancer in a rap video, while documenting her life on social media.

Woods’ mother was jailed too – for manslaughter – when the model was 4, and although she was in the care of her grandmother, she was homeless for long periods of her childhood and teen years, staying with a succession of friends and relatives, and even sleeping in her car for a while.

Woods says: “Goldie is a ‘hood chick. She’s struggled a lot; she has slept on the streets; she has sacrificed everything for her dreams. I can definitely relate to that part of her.”

There is a difference though. “She is a little more submissive than I am, which was kind of difficult, but I pushed through that.”

Also, she doesn’t have any younger siblings. “I’m not really a kid person, but kids aren’t really kids anymore, so it was more like working with two miniature adults.”

She treasures the chance to forge a career as an actress, and has another role lined up in a movie, which will shoot this year, although she declined to reveal any details.

“In modeling, you can’t really express your personality as much as I would like to,” she says. “Movies offer more of an immortal role than taking pictures that will disappear in a week now that we have social media.”

Making the film was a tough gig. “We spent 21 days filming straight in New York, and I didn’t really have much free time, and I finished on my 21st birthday at 4 a.m. So I didn’t really get to celebrate my 21st, but it was worth it. It was really hard work, but I loved the challenge, so I’ll grab the chance [to make a movie] anytime it comes my way.”

De Jong is Dutch and Woods grew up in L.A., so she is concerned whether a New York audience will be convinced they have captured the reality of life in the Big Apple. “I am a little bit nervous about that,” she says, adding that she showed the movie to some friends in New York. “They were in tears; they laughed; they related. So I think I did a pretty good job, but we’ll see what response it gets.”

De Jong’s film attempts to underscore the false promise that pop culture offers young people, and although Woods has benefited from the worlds of fashion, video, music and social media – she has almost 900,000 followers on Instagram – she approves of this aspect of the film’s message.

“You work so hard and you sacrifice so many things, and people, and loved ones, and time with loved ones just to get to this goal, and you are not really sure exactly what this goal has in store for you,” she says. “People are more in love with the idea of things than with the actual thing itself, and I think this movie expresses that a lot.”