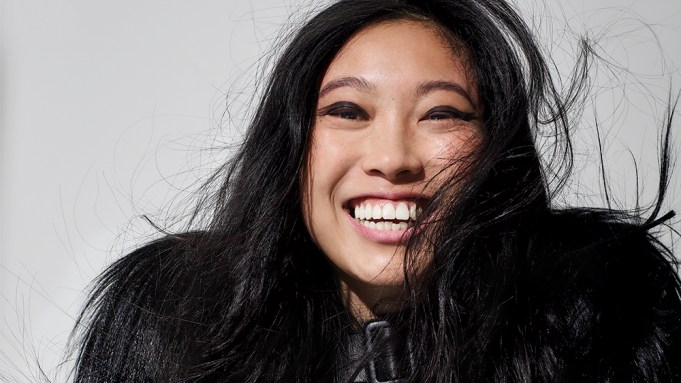 Half a lifetime ago, a teenage Nora Lum saw Margaret Cho and felt a spark of hope. Even going to a performing arts high school in Queens, N.Y., didn’t give her much confidence that the music industry would understand her, a restless Asian-American tomboy with equally brash and nervous energy to spare. She even gave herself the name “Awkwafina” to poke fun at her own awkwardness, stemming from the fact that she was never quite sure of her place in the world. Cho, however, made success feel within reach. “She existed at that specific time of my life when I saw no other Asian women, and she was so completely unashamed,” says 30-year-old Awkwafina now. “And I could tell that she suffers from something that I suffer from, which is the impossibility of being anybody else but yourself — and also, not ever wanting to be anyone else.”

And so Awkwafina doubled down on being herself. In 2012, she was working as an assistant at a publicity firm when she released a music video called “My Vag,” in which she raps about the superiority of her vagina like men usually do about their penises. (Sample lyric: “my vag squirt aloe vera / your vag look like Tony Danza.”) It was an unabashedly filthy, highly visible swing for the fences, and she knew it — so she wasn’t surprised when she subsequently got fired from that desk job, nor was she sorry. Awkwafina knew what she was doing when she published “My Vag” to YouTube, and that the explicit video would get more attention for the fact that it starred an Asian-American woman who many would otherwise expect to be meek. (Now, she says of the once controversial track with a sly laugh, her aunt’s running group jogs to it.) “Everything comes back to that ,” she says. “It was the biggest risk I’ve ever taken in my life to this day.”

It paid off. “My Vag” racked up millions of views and led Seth Rogen and Nicholas Stoller to cast her in 2016’s “Neighbors 2: Sorority Rising,” where she made a memorable dent with her limited screen time. She even caught Cho’s attention; the two collaborated on her 2016 single “Green Tea,” an experience Awkwafina says was even more meaningful because Cho reached out to her at a time when she was still relatively unknown. But Awkwafina’s last few years in the spotlight, particularly her breakout turns in glossy ensemble comedies like “Ocean’s 8” and “Crazy Rich Asians,” have made her a household name in her own right, and in a big, game-changing kind of way that keeps blowing her mind. “I didn’t create Nora, I gotta thank my parents for that — but I created Awkwafina,” she says. “And to see the name that you essentially used to make fun of the fact that you were awkward at 15 on a chair back or call sheet…it’s very powerful.”

This summer, her career hit a new peak with her more somber turn in “The Farewell,” Lulu Wang’s breathtaking film about a Chinese family that decides to conceal their dying grandmother’s cancer diagnosis from her, revealed the depth of Awkwafina’s range and earned her rapturous reviews. (An astonishing stat for you: if she lands an Oscar nomination for best actress, she’d be the first Asian American in history to do so; the last Asian woman to be nominated at all was Merle Oberon in 1935.) “The Farewell” was the sleeper hit of the summer, opening with the year’s best per-screen box office average — on its way to grossing a tidy $17.6 million for distributor A24. For Awkwafina, though, accolades weren’t the point of signing on to a story that she related to so much. Fighting for the role of Billi, the conflicted and preemptively grieving American granddaughter, was a no brainer. “[‘The Farewell’] was very different from anything I’d already done, but it didn’t matter what genre it was,” Awkwafina says. “It could’ve been sci-fi horror and I still would’ve done it.”

Meanwhile, her list of upcoming projects, including roles in Ryan Murphy’s adaptation of “The Prom” and the “Jumanji” sequel, just keeps getting longer. She’s particularly excited to become a part of the ever-growing Marvel Cinematic Universe with starring roles in “Shang-Chi,” the first Marvel movie with a predominantly Asian cast, and “Raya and the Last Dragon,” an animated adventure penned by “Crazy Rich Asians” co-writer Adele Lim. “The two stories are very special to me,” Awkwafina says. “They’re both one of a kind in their own certain ways, so I’m really excited. I just hope I do a good job.”

Awkwafina doesn’t take her success, or what it means to other people, for granted. “After ‘Crazy Rich Asians,’ people were coming up to me tearing up because it was a kind of joyous picture of representation for a lot of people who didn’t have it for years,” says Awkwafina. “And when we screened ‘The Farewell’ at Sundance, I had people come up to me hours after who were absolutely shuddering, like they couldn’t control their emotions. That was very, very moving for me to experience.” Still, Awkwafina remains wary that the industry’s increased awareness of inclusivity could fade out if not given proper and sustained support. “I always worry about that,” she says. “I wonder if it is a trend, and we don’t want anything to be a trend — especially people.” One way she hopes that fate can be avoided is for people like her to take matters into their own hands, like she did as a teen pressing “publish” on her YouTube page. “I know what I want, and that’s to tell stories that make impact on people, to tell good stories,” Awkwafina insists. “That’s what I have control over.”

Case in point is her upcoming Comedy Central series, an autobiographical comedy fittingly titled “Awkwafina Is Nora From Queens.” When building her writers’ room with showrunner Karey Dornetto (“Portlandia”), she pushed to find people who could write to growing up in New York and “from the Asian-American experience,” which inevitably led them to look outside the typical Hollywood system. “When we were looking for writers, there was kind of a belief that they just weren’t out there, but it’s bulls—,” she says. “They’re out there, and I saw a lot of them.”

Her writers’ room ended up being mostly women, a happy accident that continues Awkwafina’s streak of working alongside more women than has traditionally been the entertainment industry norm. She recalls co-starring alongside the intimidatingly high-caliber, all-female cast of “Ocean’s 8,” and how their unequivocal support for each other contrasted sharply with the constant questions they got about clashing egos on set. “You can have a bunch of women in the room and awesome s— can happen rather than, like, ‘they all just fought the whole time because they’re on their periods,’” Awkwafina sighs, rolling her eyes. “The women I’ve worked with, we genuinely want to help each other. We want to create that community.”

That’s why reaching out to promising new voices — like Cho once did with her — is high on Awkwafina’s priority list right now. “I really didn’t think that I could do anything like this in TV or movies, it just didn’t seem possible,” she says. “So I do think there’s a certain power in showing other people that you could do this, too. If that’s where I can derive my power from, I’d be content with that. It’s really hard to materialize a dream if you haven’t seen it.”

Sometimes, she admits, the increased scrutiny and pressure can get overwhelming. “You have to have a strong sense of self,” she says. “You don’t have to be born with thick skin, but you kind of have to teach yourself what noise matters and what doesn’t, which noise will be detrimental to your mental health and to your basic wellbeing, versus what’s constructive criticism.”

So, no, the self-deprecation behind her Awkwafina moniker hasn’t gone away, nor has the worry about messing it all up. She’s not sure she’ll ever be free of the nagging “imposter syndrome” that accompanies every exciting new stage of her career, and says with a self-aware smile that “anxiety and neuroses are my gasoline.” But Awkwafina is too determined to make the most of this moment, and the platform it’s given her, to slow down.

“I never imagined my life going this way, so I often have dreams about me waking up and none of this will have happened,” she says. “But with that, there’s also the sense of, well, if this is real and it is happening — do it right.”