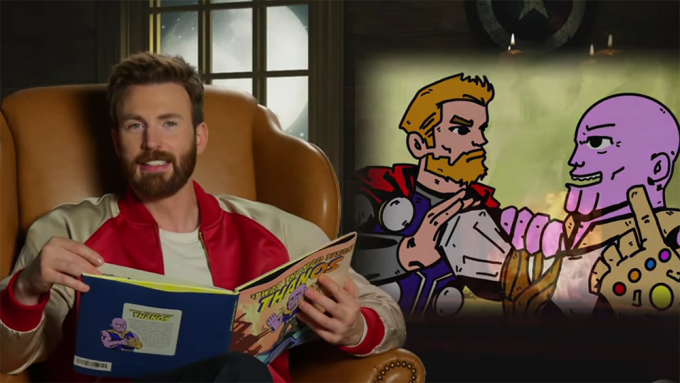 With “Avengers: Endgame” on the horizon, the film’s cast stopped by “Jimmy Kimmel Live!” Monday night to bring a genocide-less version of “Infinity War” to any kids watching at home.

“While children love superheroes, I’m not so sure how they feel about intergalactic genocide,” he continued. “It’s no fun to see Spider-Man die. To get the kids back, we wrote a version of that movie that’s kid-friendly, a children’s book, and we asked the Avengers themselves to read it for us.”

Mark Ruffalo kicked things off as the host of a fireside chat-style reading with, “Good evening and welcome to intellectual, dialectical theater of the absurd. Tonight’s performance will be an excerpt from ”Twas the Mad Titan Thanos.'”

The readings included asides from the actors, with Ruffalo inserting, “What a naughty boy” after reading that Thanos collected all the Infinity Stones for his gauntlet.

Renner, who was absent from “Infinity War,” seemed to be taken entirely by surprise that Thanos had achieved his goal: “He got all the stones? Really?”

“Look at his chin in this,” remarked Evans. “Really looks like a stupid —-, doesn’t it?”

“His chin looks like a ballsack,” Cheadle stated (the offending anatomy reference was bleeped). “I didn’t get to go to Wakanda,” he continued, once the story’s action shifted to the fictional African nation. “You’d think they’d let the black characters go to where the black people were.”

When the story continued to Thor’s unfortunate decision to aim for Thanos’ chest rather than his head, the Avengers weren’t hesitant to cast blame.

“Yeah, he blew it,” said Johansson.

“At least I got close enough to actually go for something, unlike the rest of the pathetic little useless —- Avengers,” Hemsworth said.

As the reading continued, the Avengers began to take issue with the book, from some of the rhyming, which included the pairing of “Groot” with “soot” to a “very unfortunate” rendering of Johansson as Black Widow. In the end, the children’s book wasn’t particularly “kid-friendly,” as Spider-Man and the rest of the more recently introduced Marvel characters still faded to dust.