‘Avengers: Endgame’ Cast Gets Emotional at Marvel Premiere: ‘I Cried Like Six Times’ 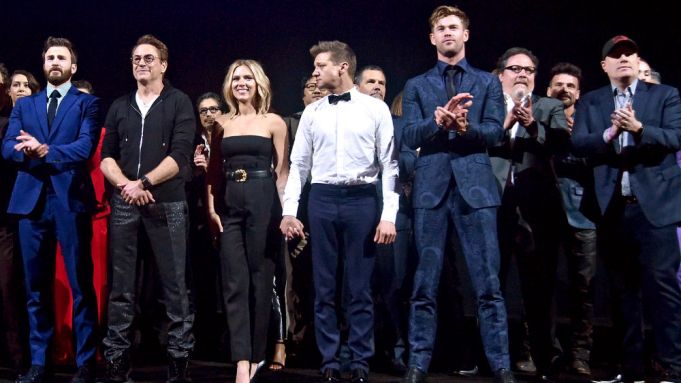 If more than 20 worldwide blockbusters over 10 years sounds like a big undertaking, try locking up the cell phones and smartwatches of the most important people in Hollywood for four hours.

Only a franchise with the cache of the Marvel Cinematic Universe could have A-list talent, celebrity fans, agents and executives gladly turn over their gadgets for a chance to watch the dazzling spectacle of “Avengers: Endgame” four days before it opens. The upcoming superhero epic serves as a culmination to the current phase of MCU comic-book films that first kicked off in 2008 by unwitting dice-rollers Robert Downey Jr., Gwyneth Paltrow and director Jon Favreau on “Iron Man.”

“It’s been an amazing ride and so moving, I love all of you guys so much. It’s been the trip of a lifetime, and what you did up there tonight was so beautiful. My brother and sister Avengers, I love you so much,” gushed Mark Ruffalo, who plays the Hulk, after a three-hour screening that saw possibly as many sniffles as it did rousing calls from the audience.

“I have a lot of my friends and family here tonight, and a lot of them are right up here,” said Captain America himself, Chris Evans. “We have this bond that transcends what we do for a living … I cried like six times [tonight].”

Scarlett Johansson, who has played the lethal and empowered Black Widow for a decade, was overcome by the “beautiful, open-minded people” she got to work with. Jeremy Renner, the bow-and-arrow wielding Hawkeye, went down a line expressing love to people including Marvel Studios President Kevin Feige and the “Endgame” directors Joe and Anthony Russo. Chris Hemsworth, who plays the beloved Thor, resented speaking last but expressed the same affection for his castmates and shouted out his family — brothers Luke and Liam, and sister-in-law Miley Cyrus.

The man of the hour, the first Avenger (at the cinema, anyway) was Robert Downey Jr. Tony Stark arrived true to form in a sleek Audi, suited and in shades with wife Susan Downey. After the carpet, the actor changed into jeans and a hoodie.

Disney CEO Bob Iger singled out the star ahead of the screening. Downey, clutching a child actor from the film, looked out onto the crowd and said, “We’ve got a lot of parties and after parties to get to, so we’re just going to say we love you.”

Given that the film unites superstar heroes from all over the Marvel Cinematic Universe, venue selection was always going to be a challenge. Marvel owner Disney settled on the Los Angeles Convention Center, where the studio staged an entirely indoor event for security reasons, according to word on the ground.

Hundreds of fans who had camped out for days in cosplay chanted and screamed from behind barriers in the vast lobby, where a circular red carpet was constructed around a giant purple letter “A,” the Avengers logo, which rotated on a platform.

Paltrow spoke with Variety, and remembered the day she got the call to come on board. She was in London when Favreau rang. “I thought, ‘Really, you want me to be in this movie?’ He explained that he really wanted, what he considered, great actors to revolutionize how people perceive these big-budget superhero movies,” said Paltrow.

On the center’s second floor, the studio spent a week building out a 2,000 seat pop-up theater on high risers, erected before a massive screen. Stars like Matt Damon and Kevin Hart came just to catch the first screening, which opens Friday and seeks to beat its predecessor “Avengers: Infinity War” at the box office as the highest-grossing opening weekend of all time.

An equally starry after-party followed as Marvel Studios lieutenants Victoria Alonso and Louis D’Esposito greeted friends and colleagues, like Skydance CEO David Ellison, who couldn’t be bothered with business on such an exceptional night. He attended with his best friend since age 13, and stood in line for candy and popcorn like the rest of the lucky moviegoers.