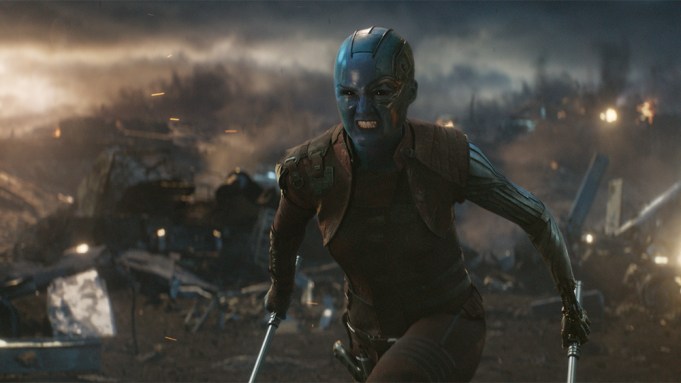 “Avengers: Endgame” is breaking records in China, raking in more than $100 million on its opening day Wednesday – two days ahead of the U.S. – and putting itself firmly on track to become the biggest Hollywood title ever in the Middle Kingdom.

Disney forecast that its new tentpole would end the day with about $107.2 million (RMB719 million), including midnight and wee-hour showings that began Tuesday night and ran into early Wednesday. By about 9 p.m. local time Wednesday, the Marvel finale had hauled in $102 million (RMB681 million), according to China Box Office. That easily gives “Endgame” the record for the biggest opening day in Chinese history, surpassing domestic film “Monster Hunt 2” (which did not have midnight previews).

“Endgame” had also already set a new all-time record for ticket pre-sales, selling more than $110 million worth ahead of its Tuesday night midnight opening to beat “Monster Hunt 2,” which sold $59.6 million. It was also the first film in China to exceed $15 million (RMB100 million) in pre-sales for midnight screenings. Astonishingly, the film accounted for nearly every single movie ticket sold Wednesday in China – a 99% share – and accounted for 83% of screenings. Popular theaters across the country had a screening of “Endgame” starting every 15 minutes.

The Maoyan online ticketing platform estimates that “Endgame” will haul in a total of $521 million (RMB3.5 billion) over the course of its run. That would make it the top-performing foreign film ever and the fourth-highest-grossing film of all time in China, behind homegrown nationalistic epics “Wolf Warrior II” (RMB5.68 billion), “The Wandering Earth” (RMB4.66 billion), and “Operation Red Sea” (RMB3.65 billion).

The top-performing foreign film has so far been 2017’s “The Fate of the Furious,” with a $393 million (RMB2.67 billion) haul. Films in China are typically given a four week screening window, but extremely high-performing titles may be given an extension by the authorities.

“Endgame” is the sequel to last year’s “Avengers: Infinity War,” and the final chapter in the 22 film-long saga of the Marvel Cinematic Universe, which began with 2008’s “Iron Man.” “Infinity War” made the biggest debut in China of all time with a $191 million three-day opening weekend. It went on to earn a total of $360 million (RMB2.39 billion) at the Chinese box office, making it the 11th-highest-grossing title of all time in the Middle Kingdom.

But “Endgame” appears as if it will smash its predecessor’s performance by a long way, though it will benefit from a five-day opening frame in China instead of just three days. Estimates put the haul over that period at about $270 million, and possibly past the $300 million mark.

It had 39,000 midnight screenings and is scheduled for 219,000 opening day screenings, for what appears to be an unprecedented total of 258,000 screenings in its first 24 hours – enough that every single screen in China would have had to play the film at least four times by the end of the day. By comparison, China’s most recent mega-blockbuster, February’s “The Wandering Earth,” had only about a quarter of that in the same time time period, with just 64,883 screenings, and last year’s smash hit “Operation Red Sea” had even fewer, with 45,000.

The film is currently rated a 9.3, 9.4 and 9.2 out of 10 on the Maoyan, Tao Piaopiao and Douban user review platforms, respectively. More than 40% of viewers hail from the country’s second-tier cities, and audiences are majority white-collar and male, with 34% of them between the ages of 20 and 24.

“The film was expected to be popular, but I really didn’t imagine it would be so hot,” a theater manager told the Chinese language Securities Daily. Analysts at Shanxi Securities told the paper that they believed the box office would peak on Saturday, though the upcoming May 1 national holiday would bring in another wave of moviegoers. The trailer has been viewed more than 6 million times on Tao Piaopiao and 20 million times on the Youtube-like Youku platform.

Pre-screenings were in such high demand that prices soared. Though the average ticket price for an IMAX film in China is around RMB40-80 ($6-$12), midnight screenings going for more than RMB300 ($45) sold out in cities nationwide. A system malfunction had one Shanghai theater accidentally selling tickets for more than RMB1000 ($150) a pop. More than half were sold before they caught the bug and returned the fare back to RMB64.

The film’s popularity has also inspired some Chinese movie theaters to skim off the top of its box office by charging and pocketing excessive “service fees” for each ticket sold. More than 1,050 theaters engaged in the practice for 220,000 tickets, according to Chinese website Mtime. Chinese authorities have stepped in to say that theaters charging more than 10% of the actual ticket price in service fees will have their ability to download the film from its digital screening key revoked, a leaked document circulating online revealed.