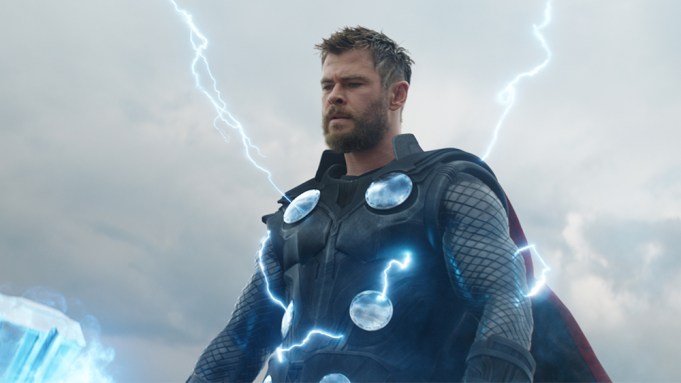 Earth’s Mightiest Heroes are likely to live to reign another day at the box office.

“Avengers: Endgame” is on its way to its third weekend at No. 1 with an estimated $62 million.

The first real challenger to “Endgame’s” rule, Warner Bros. and Legendary’s “Detective Pikachu,” is heading for about $55 million from 4,202 locations after taking in $20 million on Friday.

Ryan Reynolds stars as the cheeky yellow Pokemon with Justice Smith co-starring as Tim, a young man with whom the world class detective teams up to figure out what happened to his partner, who is also Tim’s father. Reviews for the CGI-heavy pic have been mixed, with a 64% rating on Rotten Tomatoes and A- CinemaScore.

Rob Letterman directed the film, which he co-wrote with Dan Hernandez, Benji Samit, and Derek Connelly. “Pikachu’s” audience is skewing slightly male, with 59%, and very slightly older, with 51% over the age of 25.

“Avengers: Endgame” has so far totaled over $2.3 billion worldwide, recently passing “Titanic” in North American totals to become the fifth-highest domestic grosser of all time with $660.4 million after 14 days of release. It’s currently the No. 2 film of all time globally, with just “Avatar” left at the top with $2.78 billion.

Other new releases for the weekend include United Artists’ “The Hustle,” starring Anne Hathaway and Rebel Wilson; STX Films and eOne’s “Poms,” with Jacki Weaver and Diane Keaton; and Fox Searchlight’s biopic “Tolkein,” with Nicholas Hoult as the titular author.

“The Hustle” is dropping into the No. 3 slot with about $13 million from 3,007 locations, with $3.9 million from Friday. Chris Addison directed the comedy from a script by Stanley Shapiro, Paul Henning, Dale Launer, and Jac Schaeffer. Hathaway and Wilson portray two con women who team up to hustle men who have wronged women.

“Poms” will battle the second weekends of Lionsgate’s “Long Shot” and Sony’s “The Intruder” for No. 4, with between $5 million and $6 million from 2,750 sites, after generating $1.5 million on Friday. Zara Hayes, who directed the film, co-wrote the screenplay with Shane Atkinson. The comedy, which focuses on a group of women living in a retirement home who decide to start a cheerleading squad, is currently holding a 30% rating on Rotten Tomatoes with a B+ CinemaScore.

“Tolkein,” opening at 1,495 sites, is estimated at a meager $2 million. David Gleeson and Stephen Beresford handled the screenplay with Dome Karukoski directing. The biographical drama follows “The Lord of the Rings” and “The Hobbit” author J.R.R. Tolkein through his early childhood years and his experiences in WWI, which may have influenced the internationally acclaimed book series. Lily Collins, Colm Meaney, and Derek Jacobi also star.

“Long Shot,” starring Charlize Theron and Seth Rogen, has so far totaled $16.8 million in its first 7 days, with about $3 million from overseas. “The Intruder” has amassed about $14 million in the same time frame and should land at about $20 million after the weekend’s take.

Elsewhere, IFC’s “Charlie Says” is hitting 35 theaters this weekend, directed by Mary Harron and starring Matt Smith as Charles Manson. Hannah Murray, Sosie Bacon, and Marianna Rendon portray three of Manson’s followers, on whom the film focuses, as a graduate student attempts to help them realize the gravity of their actions while in prison.

Kenneth Branagh’s “All Is True” is getting a limited release at four theaters from Sony Classics. The British film stars Branagh as William Shakespeare, with Judi Dench as his wife Anne Hathaway and Ian McKellen as the Earl of Southampton.

Neon is debuting “Biggest Little Farm” at five theaters after it premiered at the Telluride Film Festival. The documentary follows the director, John Chester, and his wife as they establish themselves on a farm in Moorpark, Calif. over eight years.