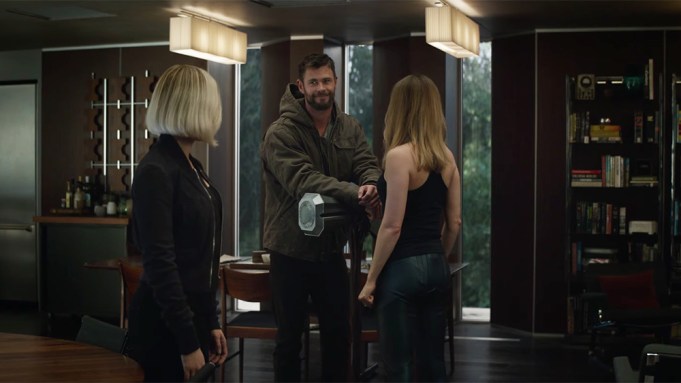 “Avengers: Endgame” has its sights set on world domination.

Disney and Marvel’s upcoming superhero epic should light the box office on fire when it launches this weekend, with the hopes of setting domestic, international, and global records. In North America alone, “Avengers: Endgame” is expected to earn between $250 million and $268 million in its first three days of release. If it hits the higher part of that range it would qualify as the biggest domestic debut of all time, a distinction currently held by 2018’s “Avengers: Infinity War,” the precursor to “Endgame,” which launched with $257.7 million.

Advance ticket sales have been sky high for “Endgame,” so box office watchers are confident the grand conclusion to the current phase of the Marvel Cinematic Universe will be one for the record books. At the very least, the opening weekend of “Endgame” will position itself as one of the best launches ever. Disney holds the top three domestic opening weekends of all time with “Avengers: Infinity War” ($257.7 million), “Star Wars: The Force Awakens ($248 million), and “Star Wars: The Last Jedi” ($220 million), and the studio anticipates “Avengers: Endgame” will join their company. If estimates hold, “Avengers: Endgame” will become one of only six films ever to cross $200 million in its opening weekend.

“We are on the cusp of what can be a monumental weekend,” said Paul Dergarabedian, a senior media analyst at Comscore. “Just how big these numbers can get remains to be seen. That’s the multi-million dollar question.”

Much like the remaining Avengers who are readying to take down Thanos, the studio certainly isn’t leaving anything to chance. “Avengers: Endgame” will touch down in over 4,600 North American theaters, marking the widest release of any movie. For now, Universal’s “Despicable Me 3” and “Jurassic World: Fallen Kingdom” boast the biggest opening-weekend theater counts ever, playing in 4,529 and 4,475 venues, respectively. “Infinity War” currently marks the third-widest launch ever. Disney bumped up the theater count for “Endgame” to  essentially as many venues that would possibly play the blockbuster to make up for the film’s lengthy runtime. The movie clocks in at three hours and one minute, which cuts out at least one screentime per day from each venue once theater owners factor in time for trailers, end credits, and cleaning.

Multiplexes are rolling out all the stops to ensure no dollar gets turned down. Seventeen of AMC Theatres locations are scheduled to be open for more than 72 hours straight to accommodate for high demand, while 29 of theater chains’ locations will be open for three consecutive days. And for those who need a refresher on Marvel lore ahead of the epic finale, some venues are offering a 22-film marathon that kicks off Tuesday morning and ends in time for a Thursday evening showing of “Avengers: Endgame.”

“Avengers: Endgame” has a chance to set both international and global marks. Along with its domestic record, “Avengers: Infinity War” also secured the best global launch of all time ($640 million). Since “Infinity War” opened in China two weeks later, it didn’t beat the international ceiling still held by “Fate of the Furious” ($443 million). “Infinity War” bowed with $382.7 million overseas. When it finally debuted in the Middle Kingdom, it amassed $191 million. “Avengers: Endgame” opens day and date across the globe, meaning it should easily crush those figures. Some estimates have the film earning more than $800 million.

“Avengers: Endgame” also has the potential to surpass the record for highest-single day gross. That distinction is currently held by “The Force Awakens,” which amassed $119 million on the Friday it launched.

The domestic box office could use the boost. Despite spring successes like “Captain Marvel” and Universal’s “Us,” ticket sales are down over 16% compared to last year, according to Comscore. Lucky for Hollywood, few studios have been able to rival Marvel in terms of consistency. The 22 films that led up to “Endgame” have generated a combined $18.6 billion worldwide. Seven of those films — “Captain Marvel,” Avengers: Infinity War,” “Black Panther,” “The Avengers,” “Captain America: Civil War,” “Avengers: Age of Ultron,” and “Iron Man 3″ — have grossed over $1 billion alone.

“Avengers: Endgame” picks up directly after the events of “Avengers: Infinity War,” which tragically ended with an intergalactic villain named Thanos eliminating half of life in the galaxy. In “Endgame,” the surviving Avengers, including Iron Man (Robert Downey Jr.), Black Widow (Scarlett Johansson), Captain America (Chris Evans), the Hulk (Mark Ruffalo), Captain Marvel (Brie Larson), Thor (Chris Hemsworth), and Ant-Man (Paul Rudd), are assembling to revert the actions of Thanos and save the universe. Anthony and Joe Russo directed both “Endgame” and “Infinity War.”

Disney looks to dominate the summer box office again. Aside from “Endgame,” the studio has a number of high profile releases slated for popcorn season including “Toy Story 4” and “The Lion King.” Other blockbuster-hopefuls eager to boost ticket sales include Sony’s “Spider-Man: Far From Home,” Universal’s “Secret Life of Pets 2,” and Warner Bros. “Detective Pikachu.”

As for this weekend, “Avengers: Endgame” is the lone newcomer to box office marquees as all other studios steered clear of the Marvel juggernaut. Without any new nationwide releases, holdover from “The Curse of La Llorona” and “Shazam!” are expected to round out domestic charts. Otherwise, it’s about to be all Thanos, all the time.