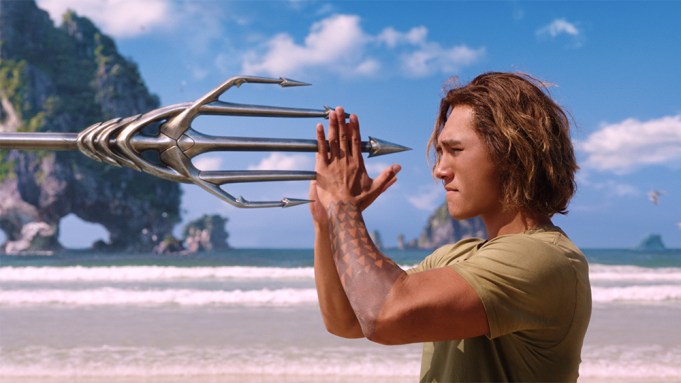 The third frame of “Aquaman” is again leaving rivals under water at the North American box office, with about $25 million for the first weekend of the year, early estimates showed on Friday.

“Mary Poppins Returns” has been forecast to finish with about $20 million, while Sony’s launch of the thriller “Escape Room” is coming in above expectations at about $15 million at 2,717 sites, although the studio is adhering to a $10 million to $12 million range. Sony’s fourth frame of “Spider-Man: Into the Spider-Verse” is heading for fourth with about $13 million, followed by Paramount’s third weekend of “Transformers” prequel “Bumblebee” with $11 million.

“Aquaman” is heading for a decline of about 52% this weekend at 4,125 domestic locations. The Warner Bros. tentpole, starring Jason Momoa, has dominated the domestic market since it opened on Dec. 21 with $222 million in its first 13 days in North America. “Aquaman” has hit a worldwide total of $846 million, led by $277 million in China.

Disney’s “Mary Poppins Returns” is holding well with a decline of under 40%. The sequel, starring Emily Blunt as the iconic English nanny, should lead the rest of the pack with its third consecutive second-place finish and wind up the weekend with a total of around $140 million. “Spider-Verse” will hit $132 million and “Bumblebee” will be closing in on $100 million.

“Escape Room” centers on six strangers in immersive rooms that turn out to be deadly traps. Directed by Adam Robitel from a script by Bragi F. Schut and Maria Melnik, “Escape Room” stars Taylor Russell, Logan Miller, Deborah Ann Woll, Jay Ellis, Tyler Labine, and Nik Dodani. The film is produced by Neal H. Moritz and Ori Marmur, and carries a modest $9 million budget. “Escape Room” is the only wide opening of the weekend.

Studios traditionally hold off on major openings in the first weekend of the year, opting instead to focus on holdover holiday-season releases. A year ago, total North American box office declined 20% from the previous weekend to $165 million when “Jumanji: Welcome to the Jungle” led with $37.2 million; two years ago, the figure slid 23% to $140 million as “Hidden Figures” topped the chart with $22 million.