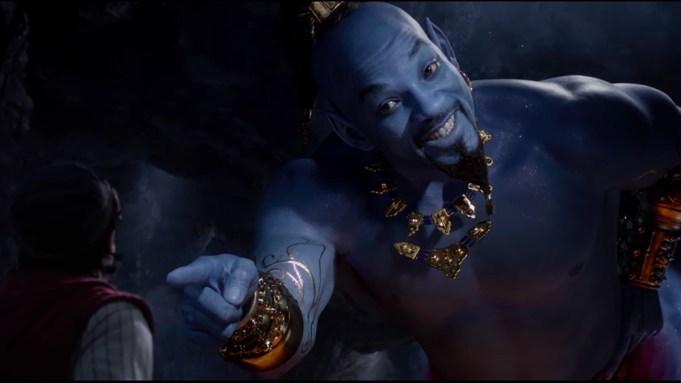 You ain’t never had a friend like Will Smith’s Genie.

That is, unless you have a pal who can turn you into a prince. In the first full-length trailer for Disney’s “Aladdin,” Mena Massoud’s street urchin uses one of his three wishes from the Genie’s magic lamp to become royalty.

Before granting his request, Smith’s Genie tells Aladdin to be more specific. “There’s a lot of gray area in ‘Make me a prince,'” Genie jokes.

Later in the clip, Genie tells Aladdin, “You look like a prince on the outside, but I didn’t change anything on the inside.”

Directed by Guy Ritchie, the studio’s live-action remake of “Aladdin” is based on the 1992 animated classic. The upcoming pic stars Smith as the Genie, Massoud as Aladdin, Naomi Scott as Princess Jasmine, and Marwan Kenzari as the evil Jafar.

The dazzling and colorful footage also teases big musical numbers with tunes from the original film, including “Friend Like Me” and “A Whole New World.”

Disney has a number of live-action adaptations in the works this year, such as Tim Burton’s “Dumbo” and Jon Favreau’s “The Lion King.” In 2018, the studio released “Mary Poppins Returns,” a sequel to the 1964 musical fantasy starring Emily Blunt and Lin-Manuel Miranda. It generated $347 million at the global box office.

“Aladdin” hits theaters on May 24.