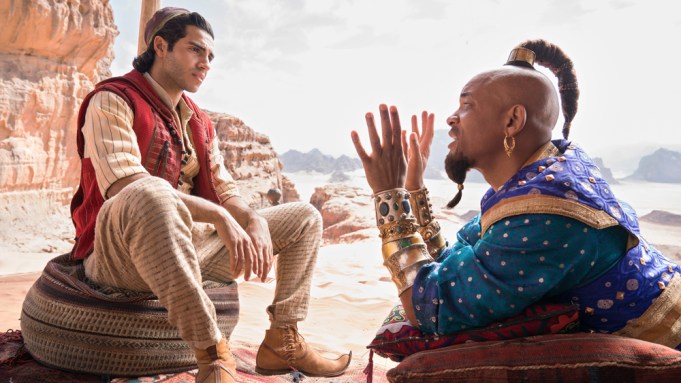 That’s well above the $5.7 million that “Pokemon Detective Pikachu” earned two weeks ago on its way to a $54 million three-day opening. Disney’s “Pirates of the Caribbean: Dead Men Tell No Tales” took in $5.5 million in previews on the same night in 2017 on its way to a $78 million opening over the Memorial Day weekend.

“Aladdin” has been pegged to gross between $75 million to $85 million at about 4,400 sites over the four-day Memorial Day weekend. That would be above the $45 million opening for Disney’s live-action “Dumbo” during March 29-31, the studio’s most recent remake of its animated classic films.

Annapurna and United Artists Releasing are opening coming-of-age comedy “Booksmart,” with expectations between $10 million to $16 million from 2,505 locations over the four-day frame. Kaitlyn Dever and Beanie Feldstein star as academic prodigies who cut loose the night before their high school graduation. “Booksmart” has been a critical favorite since premiering at South by Southwest in March, with a 99% score on Rotten Tomatoes.

Sony Pictures is launching “Brightburn,” an R-rated superhero horror-thriller produced by “Guardians of the Galaxy” director James Gunn. The pic is eyeing a start between $10 million and $12 million from 2,607 screens during its first four days in theaters. Sony/Screen Gems and the H Collective spent $6 million to produce “Brightburn.” Elizabeth Banks, David Denman, Jackson A. Dunn, Matt Jones and Meredith Hagner star in the story of a young alien who crash-lands on earth and realizes he has superpowers.

Lionsgate’s second session of “John Wick: Chapter 3” should be runner-up with at least $20 million following its surprisingly strong opening of $56.8 million. Disney’s fifth frame of “Avengers: Endgame” will probably finish third in the $15 million to $20 million range, increasing its haul to about $800 million domestically by the end of Memorial Day.

“Memorial Day weekend has been a mixed bag in recent years in terms of box office, with the selection of films rather than the holiday itself being the motivating factor for audiences who now view virtually every weekend on the summer calendar as a de facto holiday frame,” Comscore senior media analyst Paul Dergarabedian said. “While still a very important weekend, Memorial Day is not the be-all and end-all weekend of the season as it was in years past and thus it has diminished somewhat in its importance to the overall summer bottom line.”