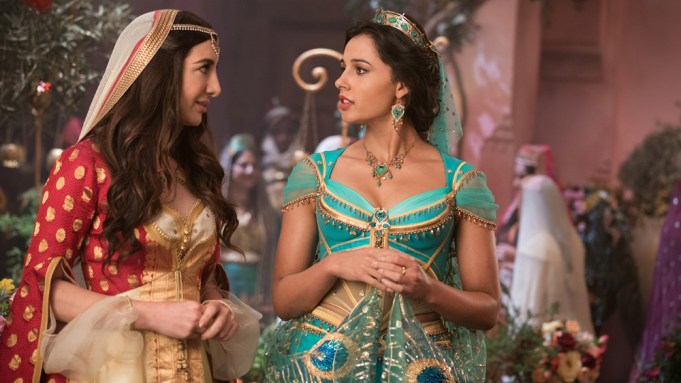 Disney’s live-action “Aladdin” soared far above the competition in North America, with an estimated $112.7 million at 4,476 sites over four days.

“Aladdin” easily outperformed Disney’s pre-opening domestic projections, which were in the $75 million to $85 million range for the four days — and underlined the validity of the studio’s strategy of rebooting its animated classics such as “Beauty and the Beast” and “The Jungle Book.” In this case, it remade the original 1992 animated movie with Mena Massoud as Aladdin, Will Smith as the Genie, Naomi Scott as Jasmine and Marwan Kenzari as Jafar. Guy Ritchie directed.

Lionsgate’s second weekend of “John Wick: Chapter 3” finished a distant second with $31 million, giving the Keanu Reeves actioner about $107.6 million domestically in its first 11 days. The studio announced a week ago that it had already greenlit “John Wick 4” for 2021.

Disney’s fifth weekend of “Avengers: Endgame” followed with $22.3 million at 3,810 locations, increasing its domestic take to $803.3 million. “Endgame” is the second-highest North American grosser of all time, following Disney’s “Star Wars: The Force Awakens” at $936 million. It’s also the second-biggest worldwide performer ever with $2.68 billion, or about $100 million short of “Avatar.”

Warner Bros.’ third weekend of “Pokemon Detective Pikachu” followed in fourth place over the holiday weekend with $17 million at 3,824 sites. The family adventure will finish the frame at the $120 million mark.

Sony’s launch of horror-thriller “Brightburn” came in fifth with $9.5 million at 2,607 venues, and United Artists-Annapurna’s opening of teen comedy “Booksmart” followed with $8.7 million at 2,505 locations. Both debuted slightly below pre-release forecasts.

Overall 2019 domestic box office reached $4.34 billion as of Sunday, 10% behind last year’s total, despite “Avengers: Endgame’s” massive haul. Upcoming releases during the next month include “Godzilla: King of the Monsters,” “The Secret Life of Pets 2,” “Men in Black: International” and “Toy Story 4.” Disney’s live-action reboot of “The Lion King” opens on July 19 — 25 years after the original animated blockbuster dazzled audiences with $422 million domestically.

“It’s going to take patience and time to erase more of the current deficit as a series of upcoming blockbusters will take a strong stand against last year’s comps and with the massive slate on tap, including Disney’s own ‘The Lion King,’ the opportunity to pull ahead of last year is certainly not an impossible task,” he added.