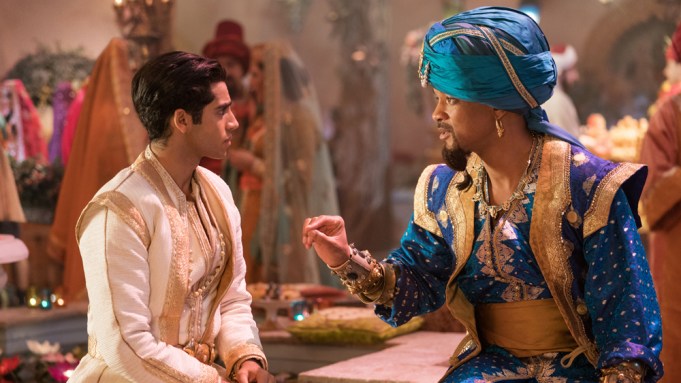 When Disney first released “Aladdin” in 1992, Bill Clinton was just elected president, “Game of Thrones” wasn’t much more than a book idea percolating in the mind of author George R.R. Martin, and Johnny Carson was wrapping up his stint as “Tonight Show” host.

In some ways, 2019 feels like a whole new world. But Disney is hoping that even 27 years later, the prospect of seeing flashy musical numbers set to timeless tunes like “One Jump Ahead” and “Friend Like Me” will entice moviegoers young and old into theaters for an updated take on “Aladdin,” the story of a charming Arabian street rat who stumbles upon a genie’s magical lamp.

“There’s a lot of goodwill toward these characters,” said Jeff Bock, a media analyst at Exhibitor Relations. “I think it will work for families over Memorial Day weekend.”

“Aladdin” is expected to earn a solid $75 million to $85 million when it opens in 4,400 locations over Memorial Day weekend. Should estimates hold, that would rank on the lower end compared to other Disney remakes. For measure, Jon Favreau’s “The Jungle Book” debuted with $103 million in 2016, while the Emma Watson-led “Beauty and the Beast” earned $174 million during its first three days of release. That haul would, however, be a sizable jump on Tim Burton’s “Dumbo,” the studio’s most recent reimagining that launched with $45 million this March. “Aladdin” could get a boost overseas after bowing day-and-date in every major international market, aside from Japan.

With “Aladdin,” Disney is also aiming to prove the strength of its arsenal of classics. It’s the second of the company’s three reboots scheduled to arrive this year, in between “Dumbo” and “The Lion King.” The studio has been dipping into its prized vault to mixed success. “Beauty and the Beast” and “The Jungle Book” were massive hits, but “Dumbo” failed to take flight, ending its box office run with a lackluster $346 million in ticket sales across the globe. (Lackluster by Disney standards, to be sure.)

One reason why “Dumbo” might have missed the mark is because it was based on a nearly 80-year-old cartoon. “Aladdin,” on the other hand, feels like it never quite left the zeitgeist. Jasmine is still a fan-favorite Disney Princess, and there’s a Tony-winning stage production currently running on Broadway.

“Aladdin” could also benefit as the lone film aimed at family crowds, a big advantage while kids are out of school over Memorial Day weekend. Critical reception seems to be mixed with a 68% on Rotten Tomatoes. Variety’s Peter Debruge called it a “mostly rewarding live-action remake.”

But even if “Aladdin” doesn’t become a box office juggernaut, Disney doesn’t have much to sweat. After “Avengers: Endgame” (you might have heard of it), the studio has “The Lion King” and “Toy Story 4” on deck during the summer movie season.

“Disney isn’t looking for a home run,” Bock says of “Aladdin.” “That’s coming with ‘The Lion King.’ Disney is in a good place, where [‘Aladdin’] doesn’t have to be a massive success to make their summer.”

Though “Aladdin” is expected to soar far and above the competition at the weekend box office, a handful of new offerings will attempt to draw audiences looking for a good laugh — or scare.

Annapurna and United Artist Releasing are opening “Booksmart,” a coming-of-age comedy with a feminine spin. Olivia Wilde’s directorial debut is expected to collect around $10 million to $16 million from 2,500 locations over the four-day frame. It follows two academic overachievers (Kaitlyn Dever and Beanie Feldstein) who let loose the night before their high school graduation. “Booksmart” has been a critical favorite since premiering at South by Southwest in March, holding a rare 100% on Rotten Tomatoes.

Also launching this weekend is “Brightburn,” an R-rated superhero thriller produced by “Guardians of the Galaxy” director James Gunn. The film, a combination of two reliable money-making genres at the box office, is eyeing a start between $10 million and $12 million from 2,600 screens during its first four days in theaters. Sony/Screen Gems and the H Collective shelled out $6 million to produce “Brightburn.” Elizabeth Banks stars in the horror pic, which centers on an otherworldly child (Jackson A. Dunn) who, after crash-landing on Earth, is revealed to have some sinister plans.