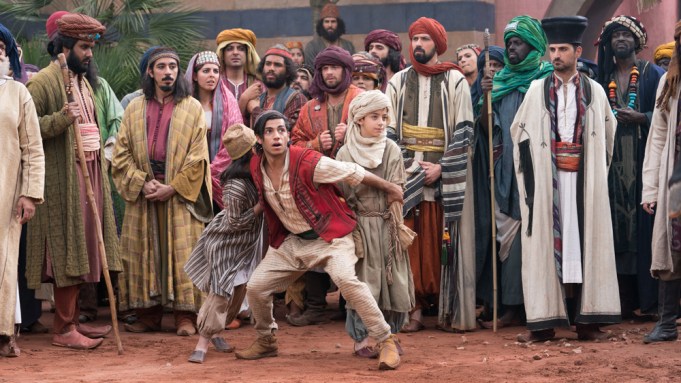 Disney’s “Aladdin” is showing plenty of worldwide drawing power with $121 million overseas for the weekend, opening in first place in nearly all international markets.

The reboot of the 1992 animated classic has received strong family attendance with a significant gain on Saturday and Sunday. China leads the way with an estimated $18.7 million for its three days for a first-place finish.

Disney said that in Europe, “Aladdin” is tracking ahead of “Maleficent” and “Cinderella” for the same markets. The U.K. is the top European market with $8.4 million ahead of openings of both “Rocketman” and “The Secret Life of Pets 2,” which both debuted ahead of their US launches. The “Pets” sequel opened with $4.1 million.

Mexico generated the top opening in Latin America with an estimated $9.2 million for three days, 121% ahead of “Cinderella” with a 65% market share. Aladdin is the top release this year in Indonesia as well as the second highest in India and Vietnam. It also scored the third highest opening weekend to date in 2019 in Australia, New Zealand and the Philippines.

The original 1992 animated movie generated $502 million at the worldwide box office. The reboot stars Mena Massoud as Aladdin, Will Smith as the Genie, Naomi Scott as Jasmine and Marwan Kenzari as Jafar. Guy Ritchie directed “Aladdin,” produced by Dan Lin and Jonathan Eirich.

“John Wick: Chapter 3” grossed $24.8 million from 74 markets this weekend, pushing the international total to $74.4 million. Warner Bros.’ “Pokemon: Detective Pikachu” pulled in $24.3 million this weekend on 17,225 screens in 72 markets, lifting the overseas total to $236.8 million and the total worldwide gross to $352.9 million. China led the way with $7.2 million for an $84 million total after three weeks.

Disney-Marvel’s “Avengers: Endgame” took in $15 million internationally over the weekend to lift its total to $1.88 billion. China is the top international market by far with $629 million as the final gross, making it the third highest film in that market behind only “Wolf Warrior 2” and “The Wandering Earth.” “Avengers: Endgame” has crossed $110 million in the UK, where it is all-time highest grossing movie.

“Avengers: Endgame” took in $32 million globally over the weekend, including $16.8 million in North America through Sunday. The mega-tentpole has hit $2.68 billion in worldwide box office as of Sunday, leaving it about $110 million behind the final $2.79 billion for the current champion “Avatar.”