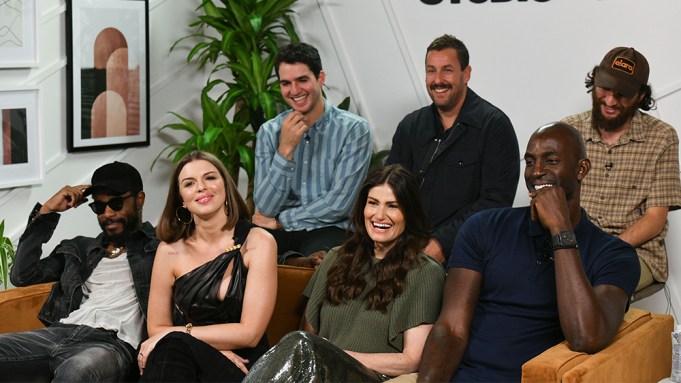 “Uncut Gems,” a dark comedy starring Adam Sandler and directed by the Safdie Brothers, is a wild ride that has generated awards season buzz since premiering at this year’s Telluride Film Festival.

In the film, Sandler portrays Howard Ratner, a jewelry dealer in New York’s Diamond district. He’s a gambling addict con-man who can’t seem to ever score the big swindle. He’s being chased by unsavory characters while navigating his Long Island family (his estranged wife, is played by Tony-winner Idina Menzel) and his out-of-control existence in Manhattan.

Sandler, Josh and Ben Safdie, along with co-stars Lakeith Stanfield, Menzel, NBA champ Kevin Garnett and newcomer Julia Fox sat down Monday at the Toronto Film Festival, where the movie also screened, for a wide-ranging interview at the Variety Studio presented by AT&T.

To prepare for his role, Sandler said he shadowed real jewelry dealers from the Diamond District on 47th Street, where they shot on location during business hours.

Many of the small parts in the film were played by real-life jewelers. “We had full access to everything,” Benny said. “It was amazing to witness. It was like the relationship existed forever.”

For the actors, perfecting a New York accent was key to nailing their roles. Sandler said he looked to people he already knew for inspiration.

“I had different ideas. I would talk to [Josh and Benny] in character a lot,” Sandler said. He also sent them videos of himself using different voices.

“There were a lot of driving shots of you just yelling,” Josh recalled. “I would love to have been someone who saw you at a red-light doing this beta version of Howard.”

Menzel didn’t have to work too hard on her accent; she grew up on Long Island. “A couple of beers and it comes out,” she cracked.

Garnett plays himself in the movie before his retirement. He’s a potential new client introduced to Howard by an aspiring rapper (Stanfield). On meeting the Safdies and hearing their pitch, Garnett laughed, “I was like, these mother—ers are weird.”

Stanfield said, “Every day was fun, a new adventure. I was very happy to be working with Adam Sandler. I grew up watching him. It was dope to be like, ‘I’m on a set with this dude. It’s crazy. And when I met [Garnett], it was automatically like s— was flying off.”

Pointing to the Safdies, Stanfield said, “These two bat-s— crazy mother—ers make it feel very fun and raw and easy. The camera disappeared every time.”

“Uncut Gems” also marks the feature film debut of musician The Weeknd. He shares a scene with Fox that involves them getting intimate in a bathroom stall at a nightclub. Fox joked she’s afraid of backlash she might receive from fans of The Weeknd’s on-again, off-again girlfriend, model Bella Hadid.

“It’s going to happen for sure,” she said, adding, “Nothing happened!”

She quipped, “We were just doing coke.”