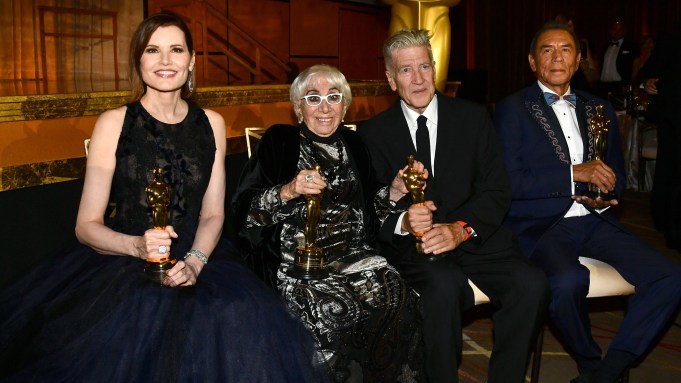 Lina Wertmüller wants to see a big change for the Oscars.

The 91-year-old Italian director had Isabella Rossellini acting as her translator while accepting her honorary Oscar on Sunday night at the Academy’s Governors Awards in Hollywood.

Wertmüller was the first woman nominated for a directing Oscar for 1976’s “Seven Beauties.” Since then, only four other female directors have been nominated in the category with only one win going to Kathryn Bigelow for “The Hurt Locker.”

Jon Hamm walked Sophia Loren onto the stage to help introduce Wertmüller. Also presenting was “Little Women” director Greta Gerwig, who said, “I learned the name Lina Wertmüller before I had seen her films.”

Jane Campion added, “How do you correct centuries of patriarchal domination? It started with Lina Wertmuller.”

Earlier in the program, Geena Davis was honored with the Jean Hersholt Humanitarian Award for her work fighting for gender-parity in media through her Geena Davis Institute on Gender in Media. “The message we are sending [in society] is that men and boys are far more valuable to us than women and girls,” she said.

Constance Wu presented to Davis, as did her “A League of Their Own” co-star Tom Hanks.

“The Jean Hersholt Humanitarian Award is given to ‘an individual in the motion picture arts and sciences whose humanitarian efforts have brought credit to the industry,’” Hanks said. “So is there a better example of that than creating an entire organization desiderated to providing young girls with examples of women on screen who are smart, who are resilient, who are hardworking, who are inspiring, who are instinctively talented and who are actually played by women who are employed in the business of show?”

Davis called for more female characters in movies. “Here’s my theory of change: nearly every sector of society has a huge gender disparity problem,” she said. “But there’s one category of gross inequality where the under-representation of women can be fixed absolutely overnight: on screen.”

Wes Studi became the first Native American Oscar winner when he was presented with his gold statute by his “Hostiles” co-star Christian Bale. “When I think of Wes, I think, ‘My god, what a face.’ A face that is etched with history, with experience, character and dignity and every emotion under the sun,’” Bale said.

Receiving some of the evening’s loudest applause and cheers, Studi held the Oscar in his hand and exclaimed, “I’d simply like to say, it’s about time.”

Also presenting to Studi was Q’Orianka Kilcher. “Wes has revolutionized how indigenous people are portrayed in cinema,” she said. “He has inspired, encouraged and lit a path, showing us all what is possible, that one person can make a difference.”

Director David Lynch gave the night’s shortest speech when he received his Oscar from “Blue Velvet” co-stars Laura Dern and Kyle MacLachlan. “To the Academy and everyone who helped me along the way, thanks.”

After the dinner and ceremony, guests gathered outside the Ray Dolby Ballroom for coffee and pastries. Olivia Wilde hung out with her “Booksmart” stars Beanie Feldstein and Kaitlyn Dever as well as Dakota Johnson, who was with her fellow “Peanut Butter Falcon” actor Zack Gottsagen. “Bombshell” star Charlize Theron and “A Beautiful Day in the Neighborhood” director Marielle Heller embraced when they were introduced to each other. “Harriet” star Cynthia Erivo chatted with Jordan Peele and Lupita Nyong’o.

The Governors Awards is considered a crucial campaign stop for Oscar hopefuls. Also spotted in the crowd were Edward Norton, “Jojo Rabbit’s” Roman Griffin Davis as well as his director Taika Waititi, “Little Women” co-stars Saoirse Ronan and Florence Pugh and “Just Mercy” star Jamie Foxx, who opened the show by bringing Eddie Murphy on stage. The former “Saturday Night Live” funnyman recently made his return to the big screen with Netflix’s “Dolemite Is My Name.” “Rocketman” was represented by director Dexter Fletcher and stars Taron Egerton and Jamie Bell. Newcomer Jodie Turner-Smith hit the carpet as her “Queen and Slim” co-star Daniel Kaluuya snuck by, avoiding any interviews.

Jennifer Lopez talked with Variety about the Oscar buzz she’s receiving for “Hustlers.” “The fact that it was done by all women, produced, directed, written, starring, edited, it’s never happened in my career,” she said. “It is like a little unicorn.”