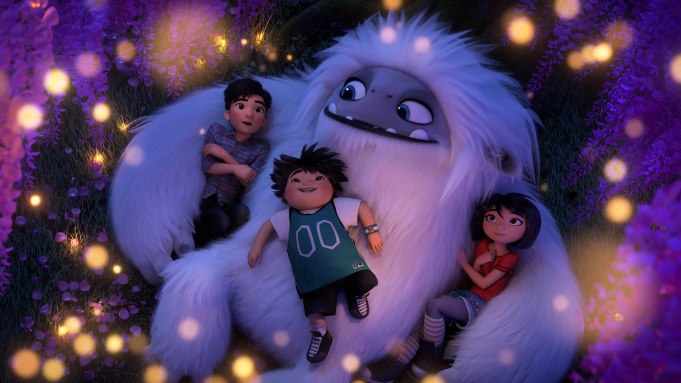 An adorable yeti will help close out a surprisingly promising September at the domestic box office.

Universal’s animated adventure “Abominable” is expected to debut in first place and should collect $17 million to $20 million from 4,200 North American theaters this weekend. If estimates hold, those ticket sales would rank as the biggest opening weekend this year for an original animated film. (That benchmark belongs to Paramount’s “Wonder Park” with $15.8 million.)

The film should benefit from being one of the few offerings catering to families. Currently, movie theater marquees are stacked with adult-skewing titles like Focus Features’ “Downton Abbey,” Disney-Fox’s “Ad Astra” and STX’s “Hustlers.” September isn’t a traditionally busy month at the box office, but “Downton Abbey,” “Hustlers” and “It: Chapter Two” have all been embraced by audiences. That’s welcome news, considering the year-to-date box office is down over 5%, according to Comscore. Fall offerings like “Joker” and “Frozen 2” should continue to help close that gap.

Revenues for the entire month likely won’t match the record set in 2017 (when the original “It” became a smash hit), but this year is expected to rank among the strongest Septembers in history.

“Abominable” follows a young girl named Yi (voiced by Marvel’s “Agents of S.H.I.E.L.D.” actress Chloe Bennet) who embarks on an epic journey to reunite a yeti named Everest with his family. Jill Culton wrote and directed “Abominable” and is the first female to independently make an animated movie for a major studio. Universal’s DreamWorks and Pearl Studios shelled out $75 million to capture the on-screen scenery that unfolds as Yi journeys across China to the Himalayas. Universal is also releasing the film this weekend in 27 international markets, including Brazil, Mexico and Germany. Pearl Studios will distribute “Abominable” in China.

While “Abominable” is the only new nationwide release, a number of holdovers should continue to lure older audiences. “Downton Abbey” will likely slide to second place and should earn $14 million to $16 million during its sophomore outing. Adult crowds have been the primary ticket buyers for “Downton Abbey,” a demographic that doesn’t traditionally turn out in large numbers on opening weekends. However the movie, a continuation of the popular British TV show, debunked that notion and kicked off with an unexpectedly strong $31 million. Overseas, “Downton Abbey” has picked up $41 million for a global haul of $72 million.

Another leftover, “Ad Astra,” is looking to make around $9 million during its second weekend in theaters. Boosted by positive reviews, the Brad Pitt-led astronaut drama launched last weekend at the higher end of projections with $19 million. But even with positive sentiment, sci-fi films routinely see big dips after inaugural outings. Recent releases in the genre like Paramount’s “Annihilation” and Universal’s “First Man” dropped nearly 50% in their sophomore frames.

Lionsgate’s “Rambo: Last Blood” should see a similar result after bowing with $18.8 million last weekend. The last entry in Sylvester Stallone’s action franchise to hit the big screen was 2008’s “Rambo,” which debuted with $18.2 million. In its second frame, that film declined 60% to generate $7 million.

In limited release, Roadside Attractions is unveiling “Judy,” a biographical drama about Judy Garland, on 457 screens. It premiered to rave reviews at this year’s Telluride Film Festival and launched Renee Zellweger into the awards conversation for her portrayal of the famed actress. Set in 1969, “Judy” follows the troubled singer 30 years after her star-making role in “The Wizard of Oz.” The cast also includes Jessie Buckley, Finn Wittrock and Michael Gambon.