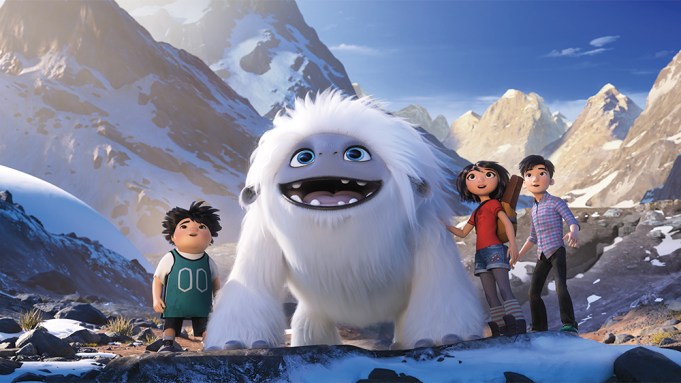 “Abominable,” produced by Universal’s DreamWorks Animation and Pearl Studios, has been forecast to take in as much as $20 million this weekend when it expands to 4,242 locations. The film centers on the relationship between a modern Chinese teenager and a Yeti named Everest as they embark on an epic journey to reunite with his family in the Himalayas. The U.S. voice cast includes Chloe Bennet, Tenzing Norgay Trainor, Albert Tsai, Eddie Izzard, Sarah Paulson, Tsai Chin and Michelle Wong.

Jill Culton wrote and directed “Abominable” and is the first woman to independently make an animated movie for a major studio. The film carries a $75 million budget. Critical reception has been positive with a current 76% score on Rotten Tomatoes.

Universal is also releasing the film this weekend in 27 international markets, including Brazil, Mexico and Germany. Pearl Studios will distribute “Abominable” in China.

“Abominable” should benefit from being one of the few offerings catering to families at a time when adult-skewing titles like Focus Features’ “Downton Abbey,” Disney-Fox’s “Ad Astra,” STX’s “Hustlers” and Warner Bros.’ “It: Chapter Two” have been dominating domestic moviegoing. The second weekend of “Downton Abbey” may repeat as the box office winner following its surprisingly strong $31 million opening frame. “Hustlers,” “Ad Astra,” “It: Chapter Two” and “Rambo: Last Blood” will be battling for third place in the $8 million to $10 million range.

September isn’t a traditionally busy month at the box office, but the solid performances by “Downton Abbey,” “Hustlers” and “It: Chapter Two” may lead to a monthly record by topping the $700 million mark set two years ago when “It” opened, according to Comscore. The current titles have also narrowed the gap from last year’s record-setting pace with 2019 trailing by 5.3%. As of Sept. 25, this year’s North American total had hit $8.35 billion.

Next weekend’s arrival of Warner’s controversial “Joker,” which has generated concerns about safety, has been forecast to to take in around $80 million during Oct. 4-6. Disney’s “Maleficent: Mistress of Evil” should deliver around $50 million in its Oct. 18-20 opening, according to early tracking.

“In the wake of a solid weekend that brought mature viewers to the multiplex, a family film will now hit the multiplex to add even further to the diversity of content that is fueling a much-needed resurgence at the box office as we await the arrival of ‘Joker’ and a host of other anticipated films that will do their best to drive 2019 to a hard-fought win over the record year of 2018 at the box office,” said Paul Dergarabedian, senior media analyst with Comscore.