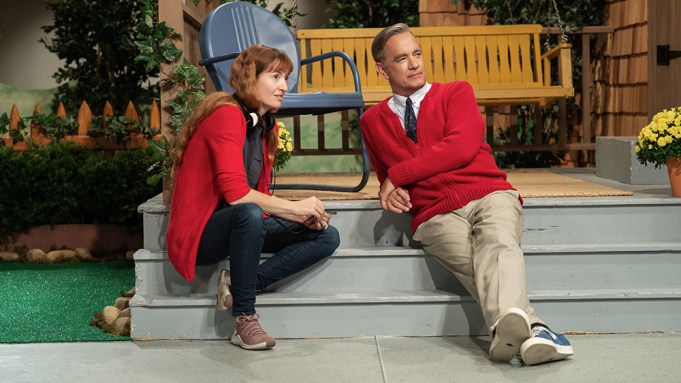 For director Marielle Heller, part of the research she did for her third feature film, “A Beautiful Day in the Neighborhood,” included watching old episodes of “Mister Rogers’ Neighborhood” with her 4-year-old son in her lap. In the film, Tom Hanks throws on the cardigan as beloved children’s TV host Fred Rogers, playing an unsuspecting antagonist to Matthew Rhys’ Lloyd Vogel, a cynical journalist and new father tasked with writing a magazine profile about Rogers — a plot based on actual writer Tom Junod and his 1998 Esquire Magazine article.

Indeed, she tells Variety, her family is a fan of Rogers and other members of the Neighborhood of Make-Believe, especially Daniel Striped Tiger, the most soft-spoken puppet (originally voiced by Rogers) whose “son,” Daniel Tiger, is now featured in an animated spinoff series.

As a working director, Heller says being able to spend time with family is integral to getting more women in director’s chairs — and that means manageable hours.

“Why do so many women drop out of the workforce at this age, in our late 30s, early 40s? Well, often it’s because we’re raising kids, so, let’s be honest about that,” says the director, who helmed Oscar-nominated drama “Can You Ever Forgive Me?” in 2018. “We have pretended for many generations that we are not trying to do everything, but we are trying to do everything.”

Heller shot “A Beautiful Day in the Neighborhood” in the same WQED studio in Pittsburgh where the real Rogers filmed his show. On set, she says she tried to adhere to the concept of “French hours,” where crews do not break for lunch, film straight through a 10-hour day and wrap earlier.

“For me as a parent, that makes this life more sustainable,” Heller tells Variety. “And I believe it’s one way to get more women behind the camera — is if we don’t have these totally unsustainable lives where we work 16- to 18-hour days.”

She acknowledges that some of her colleagues may balk at the practice. But it’s also about showing to her crew that she wants them to have lives outside of work, too.

“When I made this movie, I said, ‘Fred Rogers would never want us to make a movie about him where we had to abandon our children in order to make this,'” Heller says.