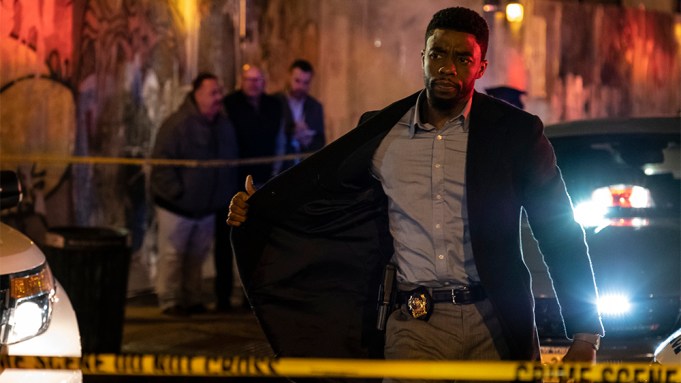 Shots are fired in a new trailer for “21 Bridges,” starring Chadwick Boseman and J.K. Simmons, released during a Comic-Con panel today.

The heist-thriller, produced by Joe and Anthony Russo of “Avengers: Endgame,” stars Boseman as an NYPD detective Andre Davis who finds himself embroiled in a city-wide manhunt after two cops are accused of committing a string of murders. Mysteriously, Boseman’s character is the only one who can catch the killers, and following a tumultuous history with the rest of the detective team, he’s now earned the opportunity for redemption.

Determined to fulfill his duties, Andre blocks every exit out of Manhattan in an attempt to trap the alleged killers.

“Close the island,” he instructs two detectives. When the cops are confused, he clarifies: “Manhattan. The 21 bridges, shut ’em down. Three rivers, close ’em. Four tunnels, block ’em. There cannot be a version of this where these two aren’t found.”

Other bold-faced names such as Taylor Kitsch and Sienna Miller will also star, in addition to Stephen James, Keith David, Jamie Neumann, and Gary Carr.

Boseman also serves as an executive producer on the film alongside the Russos, Mike Larocca, Gigi Pritzker, and Logan Coles for STX films. Brian Kirk directed the actioner.