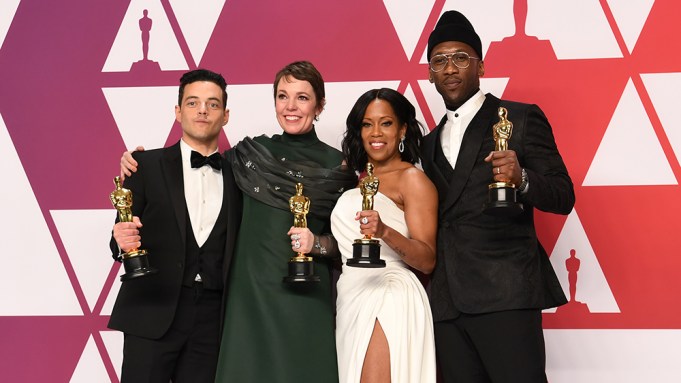 Close behind with three wins each were “Roma,” “Black Panther,” and “Green Book,” which won best picture alongside gold for original screenplay and supporting actor.

On the acting side, Olivia Colman won for actress, upsetting a competitive field that included Yalitza Aparicio, Melissa McCarthy, Lady Gaga, and frontrunner Glenn Close. Close had previously won the Golden Globe and SAG Award for her role in “The Wife,” so all eyes were on her to see if she could pull in her first win after seven nominations. As expected, “Bohemian Rhapsody” star Rami Malek won for actor.

Yalitza Aparicio, “Roma”
Glenn Close, “The Wife”
Olivia Colman, “The Favourite” (WINNER)
Lady Gaga, “A Star Is Born”
Melissa McCarthy, “Can You Ever Forgive Me?”

“All The Stars” from “Black Panther” by Kendrick Lamar, SZA
“I’ll Fight” from “RBG” by Diane Warren, Jennifer Hudson
“The Place Where Lost Things Go” from “Mary Poppins Returns” by Marc Shaiman, Scott Wittman
“Shallow” from “A Star Is Born” by Lady Gaga, Mark Ronson, Anthony Rossomando, Andrew Wyatt and Benjamin Rice (WINNER)
“When A Cowboy Trades His Spurs For Wings” from “The Ballad of Buster Scruggs” by David Rawlings and Gillian Welch