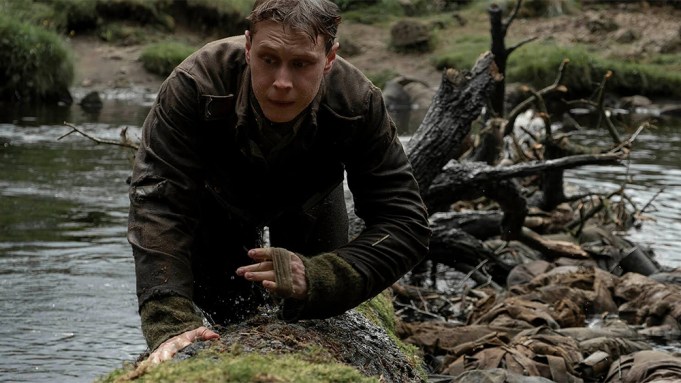 Sam Mendes revisits the height of World War I in his upcoming period drama “1917.” The new trailer released Thursday captures the mounting pressure to stop a brutal attack that could threaten the lives of thousands of soldiers on the battlefield.

The heart-pounding footage opens with a soldier running through black-clouded bomb blasts before the clip cuts to two more servicemen carefully searching an underground bunker, only to be surprised by an unexpected explosion and forced to quickly evacuate.

Later in the trailer, Colin Firth’s character meets with two young soldiers, portrayed by “Captain Fantastic’s” George MacKay and “Game of Thrones” actor Dean-Charles Chapman. There, he instructs them of their mission: to save a battalion of fellow fighters — including one of their brothers — from ultimate destruction unless the two venture across enemy lines to quickly call off a planned attack.

“Your orders are to deliver a message calling off tomorrow’s attack. If you don’t, we will lose 1,600 men, your brother among them,” Firth’s character says.

The trailer then cuts to a montage of shots featuring men swimming through bodies, hiding in trenches, and avoiding the perilous reality of World War I. 1917 was the fourth year of the war, which ultimately ended on Nov. 11, 1918.

“If you fail, it will be a massacre,” Firth’s character concludes.

“1917” marks the screenwriting debut of Mendes, the Oscar-winning director for “American Beauty.” Krysty Wilson-Cairns co-wrote the script. The film also stars Benedict Cumberbatch, Mark Strong, Andrew Scott and Richard Madden. Mendes’ other credits include “Road to Perdition,” “Revolutionary Road,” “Skyfall,” and “Spectre.” He’s also worked extensively in Broadway on shows such as “The Ferryman,” “Cabaret,” “Gypsy” and “Charlie and the Chocolate Factory.”