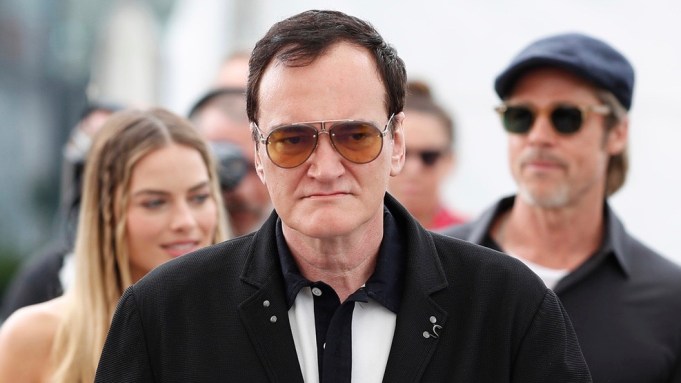 Quentin Tarantino snapped at a female reporter from The New York Times who asked why Margot Robbie wasn’t given more to say in his latest film “Once Upon a Time in Hollywood.”

“I reject your hypothesis,” he said at a press conference for his new film on Wednesday morning at the Cannes Film Festival.

Robbie plays Sharon Tate in the movie. The film takes place in the 1960s Hollywood and focuses on a struggling TV actor named Rick Dalton (Leonardo DiCaprio) and his stunt double Cliff Booth (Brad Pitt) as they make their way through a changing movie industry.

At the press conference, Tarantino scowled — looking visibly upset — at the question by New York Times reporter Farah Nayeri. But Robbie tried to tactfully answer it.

“I think the moments I was on screen gave a moment to honor Sharon,” Robbie said. “I think the tragedy was the loss of innocence. To show the wonderful sides of her could be done without speaking. I did feel like I got a lot of time to explore the character without dialogue, which is an interesting thing. Rarely do I get an opportunity to spend so much time on my own as a character.”

Sony Pictures’ “Once Upon a Time in Hollywood” premiered at Cannes to strong reviews on Tuesday night. This terse exchange came at the end of 30-minute press conference where Tarantino and his cast fielded mostly congratulatory questions, which didn’t address Harvey Weinstein (who frequently worked with Tarantino) or Uma Thurman (who gave an interview last year to the New York Times detailing the alleged abusive behavior she had to endure at the hands of Tarantino on the set of “Kill Bill”).

Tarantino opened the press conference by addressing the public’s continued interest in Charles Manson and his cult. “I think we’re fascinated by it because at the end of the day, it seems unfathomable,” Tarantino said. “I’ve done a lot of research on it. How he was he was able to get these girls and young boys to cement to him seems unfathomable. The more you learn about it, the more information you get, it doesn’t make it any clear. It makes it more obscure.”

DiCaprio said that by elevating two underdog characters in Hollywood, Tarantino wanted to celebrate the business that he grew up in. “I think this movie is a love story to this industry,” DiCaprio said. “We studied people from Ralph Meeker to Eddie Byrne, all these actors whose work [Tarantino] really appreciates from an artistic perspective, who contributed in his mind to cinematic and television achievements. That was most touching about the story. It’s a love letter to this industry we’re so fortunate to work in.”

The film is the first collaboration between Pitt and DiCaprio.

“It was great ease, great fun,” Pitt said. “It’s that thing of knowing you got the best of the best on the opposite side of the table holding up the scene with you. We had similar experiences to laugh about. I hope we do it again.”

Chaz Ebert asked Tarantino a question about taking stock of his life, and how he’s changed since “Pulp Fiction.”

“I just got married six months ago,” Tarantino said, as he nodded to his wife–Daniella Pick–who was sitting in the front row. “I’ve never done that before. Now I know why. I was waiting for the perfect girl.”

DiCaprio may be an Oscar-winning actor, but he said he understood Dalton and his fear of failure.

“I immediately identified with this character in many ways,” he said. “I grew up in the industry. This guy is on the outskirts; time is changing and he’s left behind. For me, it’s an immense appreciation I have for the position I’m in. I know how lucky I am.”