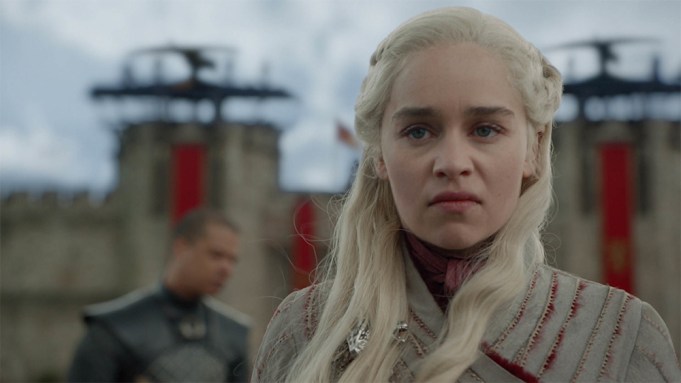 Chloë Sevigny may have starred in HBO’s “Big Love,” but her association with the premium cable channel isn’t strong enough to help her out of a jam. She’s desperate to watch the series finale of “Game of Thrones” while she’s at this year’s Cannes Film Festival to promote Jim Jarmusch’s “The Dead Don’t Die.”

“What are they going to do? Send me a link,” she told Variety‘s Marc Malkin.

Unless she figures out a way to pirate the episode or finds a bar or friend’s house that’s showing “Game of Thrones” at 3 a.m. Cannes times Monday, she may miss out on the big reveal or risk having someone spoil who ends up on the Iron Throne.

“I can’t look at my phone — there are spoilers,” Sevigny lamented.

She’s not the only one suffering this predicament. “Game of Thrones” is a television phenomenon with few parallels, one that thrives on twists and turns, shocking betrayals and surprise alliances as various factions vie for control of Westeros. And since the show started outpacing George R.R. Martin’s original novels way back in season five, it’s anyone’s guess whether a member of the Stark, Lannister or Targaryen clans will emerge as the one king or queen to rule them all. In the social media age, many viewers essentially live-tweet their response in real time, making it nearly impossible for anyone online who may have missed the most recent episode to avoid reading about what happened.

That’s left some Hollywood players reconsidering their plans to travel to Cannes this year. At the JW Marriott, one of the posh hotels that line the city’s main thoroughfare, one U.S. customer called to ensure he could watch the show in his room. Turns out, he couldn’t. And he was likely out of luck at the Grand, the Martinez, the Carlton or the Gray d’Albion, which don’t offer HBO through OCS (Orange Cinéma Séries), the French cable channel that shows the series. Some of the most expensive rooms do offer a slightly more expansive channel selection, but it’s unclear if that includes any platform that shows “Game of Thrones.” Complicating issues is the fact that HBO Now isn’t available outside of the U.S.

That’s left some attendees willing to bend the rules in order to watch “Game of Thrones.” Many studio executives and producers privately cop to using virtual private networks or VPNs to builds a secure connection between a mobile device and the internet that allow HBO and HBO Go subscribers to stream the series. These networks mask users’ geographic location. One executive rationalized that he is “already paying for HBO anyway so [he] should be able to see it.”

Although some Hollywood players expressed anxiety about their ability to stay abreast of the big goings on in the Seven Kingdoms, it’s a familiar problem for producers and directors who are often out of the country for long stretches of time, shooting movies in far-flung locations.

RT Features founder Rodrigo Teixeira recently set up an account in the Canary Islands where he was filming so he could stay in the loop on “Game of Thrones.” He’s done the same thing in Cannes. He got a French friend to buy a French iPad and set him up with an account so he can find out what goes down in Westeros.