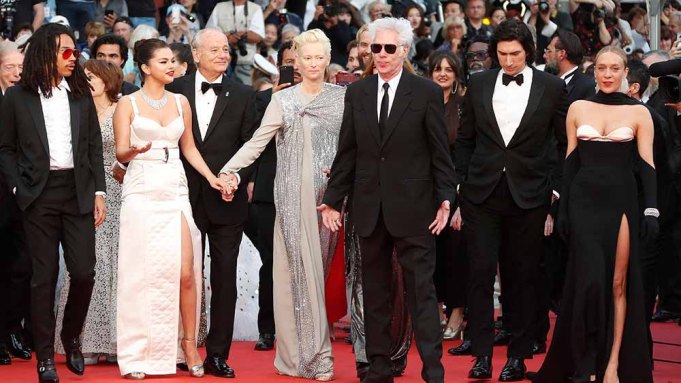 Bill Murray, Adam Driver, and Selena Gomez walked the red carpet outside the Palais des Festivals on Tuesday night to kick off the Cannes Film Festival with the splashy premiere of Jim Jarmusch’s “The Dead Don’t Die.”

They weren’t the only big names parading past a firing line of photographers and fans. Javier Bardem shook his hips before waving to the crowd, Elle Fanning dazzled in a flowing pink gown with an elaborate cape, and Tilda Swinton, wearing her blonde hair in a pompadour, looked coolly elegant in a sparkling dress. It was an intoxicating mixture of glamour and cinephilia, a signature cocktail that has made the seaside gathering perhaps the most famous gathering of film stars and auteurs in the world.

The display of star power comes as the festival is trying to navigate a changing media landscape, one in which the festival’s reverence for the primacy of the theatrical experience threatens to seem retrograde. Once again, Cannes’ leadership has barred Netflix from screening its films in competition. French exhibitors don’t want to highlight movies from the company because Netflix refuses to adhere to a mandated 36-month window between a film’s theatrical release and its premiere on streaming services.

During an opening night presentation, host Édouard Baer appeared to take a swipe at Netflix, stating that contrary to the streaming revolution currently unfolding, “cinema is theater.” In his remarks, jury president Alejandro González Iñárritu, the Oscar-winning director of “The Revenant” and “Birdman,” praised “the liberating power of cinema,” adding, “stories and ideas can changes lives. This communal experience is beautiful.”

Inside the Palais, the festival stage was adorned with an empty director’s chair emblazoned with the name “A. Varda.” It was a tribute to Agnès Varda, the Belgian-born French film director behind “Cléo from 5 to 7,” who died in March at the age of 90. Varda, considered a giant in the New Wave, is the subject of the festival’s poster this year. The image shows her balancing precariously on the shoulders of an assistant as she stares into a camera, willing to do almost anything to get the perfect shot.

Though “The Dead Don’t Die” hails from the Comcast-owned Focus Features, U.S. studios and media companies often struggle to justify the enormous costs associated with bringing A-list talent across the Atlantic. The fact that the festival unfolds in May, several months removed from the heart of the fall awards season, also makes it an less attractive launching pad for many Oscars contenders.

And yet some companies find the allure of Cannes, unfolding as it does alongside the azure waters of the Mediterranean, irresistible. Paramount is bringing Elton John and Taron Egerton to unveil “Rocketman,” a look at the life of the “Candle in the Wind” singer, and Sony will debut Quentin Tarantino’s “Once Upon a Time in Hollywood,” a re imagined look at Tinseltown history that stars Brad Pitt and Leonardo DiCaprio.

This year’s Cannes also promises to once again shine a spotlight on new works from foreign directors. Pedro Almodóvar is returning with his semi-autobiographical “Pain and Glory,” Belgian brothers Jean-Pierre and Luc Dardenne are on hand with “The Young Ahmed,” and French director Arnaud Desplechin, who opened the festival two years ago with the tepidly reviewed “Ismael’s Ghosts,” is back with “Oh Mercy!”

The lineup is also notable for featuring a record number of female filmmakers — women directors were responsible for 15 movies in Cannes’ official selection and four competition titles. Cannes has been under pressure in recent years to highlight more movies from women. At times, the festival has responded testily to criticism that it has been slow to diversify. At a press conference on Monday, festival director Thierry Frémaux said the festival would never promise to achieve gender parity in terms of the movies it picks to exhibit.

“It would show a lack of respect if you picked a film simply because it was by a woman,” he said.

Many of the directors making the trek to Cannes are repeat contenders. Jarmusch, whose “Dead Don’t Die” sends up the zombie movie genre, has a deep relationship with the festival, dating back to his “Stranger Than Paradise,” which won the Camera d’Or in 1984. Other films of Jarmusch’s to appear at the gathering include “Paterson,” “Broken Flowers,” “Dead Man,” and “Mystery Train.” Asked by a red carpet reporter if it was exciting to be back at Cannes, all he would say is “yes.”