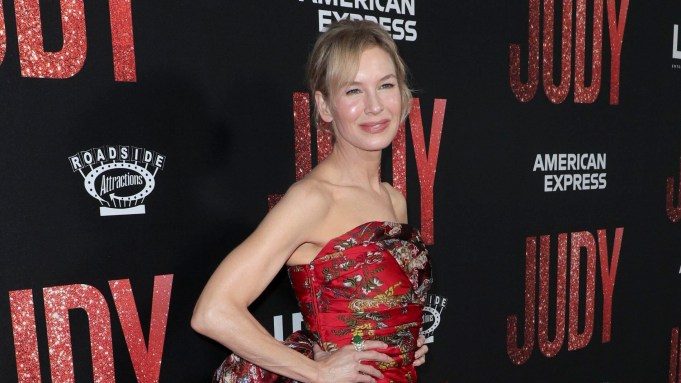 Renée Zellweger continues to follow the yellow brick road to the Oscars.

The Los Angeles premiere of Judy on Thursday night in Beverly Hills kept the Academy Award winner on track for a possible second win come February.

“We’re just so happy we’re able to share it with you tonight,” Zellweger said to the crowd before the screening began at the Academy on Wilshire Boulevard. “And I hope that you guys love it and feel as much for [Garland] in watching it as we did in making it.”

About two hours later, as the credits rolled on the Rupert Goold-directed drama about the last months of Garland’s life, sniffles could be heard throughout the auditorium. Zellweger received thunderous applause when her name appeared on screen.

Downstairs, during the post-screening buffet dinner and reception, Zellweger was mobbed by well-wishers.

“Call Me by Your Name” producer Howard Rosenman told Zellweger that he knew Garland’s fifth husband Mickey Dean, portrayed by “American Horror Story’s” Finn Wittrock, before slipping her his card.

After introducing himself, “Dynasty” actor Maxwell Caulfield asked if he could take a photo of Zellweger with his wife, actress Juliet Mills. Nia Vardalos grabbed a quick word with Zellweger.

Zellweger also shared a big hug with Neil Meron, a producer of “Chicago,” the film that first showcased Zellweger’s singing and earned her the second of her three Oscar nominations.

The night was another in a long list of successful evenings for the Roadside Attractions/LD Entertainment film. At the world premiere at Telluride, the line to get in started to form six hours before screening time. Inside, Zellweger received a standing ovation when she was introduced before her pre-screening tribute. The first screening of “Judy” at the Toronto Film Festival received a two-minute standing ovation.

Next up is another screening tomorrow night at the Academy, followed on Monday by what’s being billed as an “intimate screening” at New York’s Crosby Hotel hosted by Harry Connick, Jr.