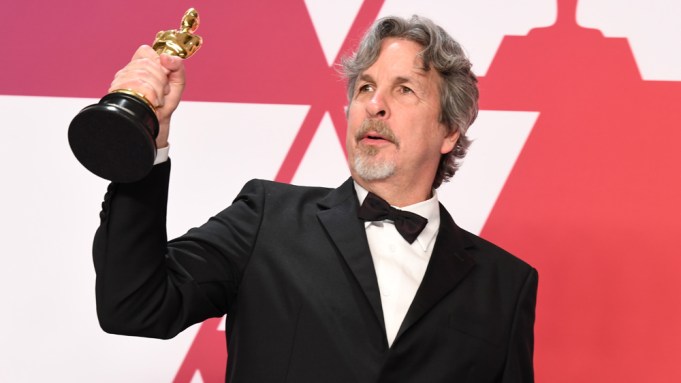 There wasn’t a whole lot to be shocked about as the 91st Oscars zipped along during a (comparatively) brisk 195-minute ceremony Sunday night. Nothing much slipped up on the pundits, beyond “The Favourite” star Olivia Colman taking the steam out of Glenn Close’s march through the season, and while most (though not all) expected a best picture victory for Netflix’s “Roma,” it was clearly in a race with “Green Book” for the final prize.

In the end, Universal claimed victory for “Green Book,” and not just for itself but in part for major film studios, which roared back into the race this year with nominated blockbusters and populist entertainment. The last time Universal claimed victory was for 2001’s “A Beautiful Mind,” and since then, only Warner Bros. of the Hollywood majors has walked away with top honors (for “Million Dollar Baby,” “The Departed” and “Argo”). It’s been a circuit dominated, as departing Academy governor Bill Mechanic bemoaned last April, by independent filmmaking that often would win the day prior to the Oscars at the annual Film Independent Spirit Awards.

That changed with “Green Book,” a movie that could not have been more battered and bloodied on its way to the Dolby Theatre. There is no need to recount the mudslinging and pointed criticisms of the film. Suffice it to say everyone involved with that campaign likely feels like they just ran multiple marathons.

Speaking of the pointedly criticized, Bryan Singer’s “Bohemian Rhapsody” ultimately walked away with four Oscars, more than any other film. Of course, Singer’s name — much like at the Golden Globes — was not uttered once. But the outsized showing of these two films laid bare the disconnect between critics and Oscar voters this year. A 49 Metacritic score for “Bohemian Rhapsody” and a 69 score for “Green Book” (with ratings of 61% and 80% on Rotten Tomatoes) are notably low. You have to go back to “Crash” for a parallel.

But then, the Academy’s annual best picture decision remains at the whims of the preferential ballot. This is a paradigm that awards safety and, regardless of how you feel about this year’s best picture winner, that probably ought to be generally rethought.

Colman’s win was an absolute delight, particularly at the end of a season where Fox Searchlight’s campaign moves (running her in lead and her co-stars in supporting) were so fiercely criticized. While Close was seemingly cruising to a win, however, the British Academy may well have provided an Oscar harbinger by awarding Colman. But given that it was for a film about British royalty, everyone can be forgiven for assuming that to be a one-off.

Spike Lee finally has a competitive Oscar, and it was some kind of whiplash to see him accept the adapted screenplay prize for “BlacKkKlansman” moments after “Green Book” won. (The latter and its perceived retrograde handle on race relations has been demeaned in the same breath as “Driving Miss Daisy,” which famously won best picture 30 years ago when “Do the Right Thing” wasn’t even nominated.)

Personally, I was pleased to see Damien Chazelle’s “First Man” walk away with SOMETHING — a visual effects honor. There’s a movie that should have won more than it did and certainly been up for consideration in more categories than it ultimately was. And its win was also another feather in Universal’s cap.

But even in defeat, Netflix clearly had Hollywood’s number this year. Complaints of overspending, whispers among some voters that a vote for “Roma” was a vote against their business — the industry was running scared through the circuit. “Roma” ultimately won three prizes, for cinematography, directing and foreign language film. It’s the first foreign victory for Mexico, it adds two more Oscars to director Alfonso Cuarón’s mantle (up to four now, with two previous ones for “Gravity”) and it announced the streaming giant as a force to contend with in the Oscar space going forward.

As if to emphasize the point, Netflix almost seemed to warn viewers that the company will be back next year: A teaser for Martin Scorsese’s “The Irishman,” free of any footage, was truly unexpected, but there it was right in the middle of the show.

And speaking of the show, I have to say it really worked. The Queen opening didn’t quite feel like the rousing start at home that it might have in the room, but beyond that, the production was smooth and somewhat effortless. Who knew you didn’t need a host? Hopefully the Academy learns from this. Book a small, talented grouping to open the show like Tina Fey, Amy Poehler, and Maya Rudolph did — no pressure to be the face of the telecast — and get on with it.

Moment of the night? Bradley Cooper and Lady Gaga’s rendition of “Shallow” from “A Star Is Born.” That was show-stopping territory. It’s a pity Kendrick Lamar and SZA couldn’t join the festivities, but I think producers Donna Gigliotti and Glenn Weiss did a fine job here. The winners are the winners but there is a lot to take away from the ups and downs of this season for the Academy. Hopefully the postmortem takes it all into account.