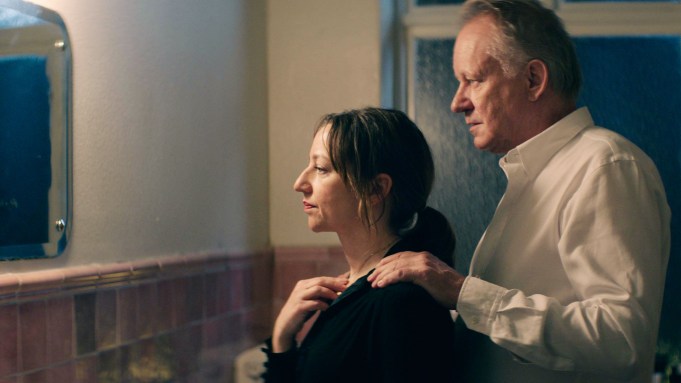 After making her feature debut with the well-received film “Limbo” in 2010, Norwegian filmmaker Maria Sodahl is making a comeback with “Hope,” a drama based on her experiences after being diagnosed with brain cancer years ago.

Set to world premiere at Toronto in the discovery section and repped by TrustNordisk, the personal movie is a two-hander starring Andrea Braein Hovig (“All the Beauty”) as Anja, a strong forty-something woman who is an accomplished professional and runs the household of her extended family, including the children she had with Tomas (Stellan Skarsgard), with whom she has lived for almost two decades. When she gets a brain cancer diagnosis the day before Christmas, their life breaks down, exposing neglected love.

“I had the urge to tell my story, and at the same time my aim was to make a personal but not a private film. It’s about what happens when someone faces the threat of death. Everything becomes more clear and the communication very direct. The incertitude, the subtext — it all disappears,” said Sodahl, who took a long break from filmmaking to take care of her health.

Although “Hope” deals with a woman struggling to survive cancer, Sodahl said the movie was about love rather than death. “It’s about being able to receive and give love, it’s about modern love with these two people who get a second chance to get to know each other, and it’s about loving life,” said the director.

“Hope” also depicts the health system in Norway — all the doctors in the film are all played by real doctors. “We cast about 100 doctors. It was important for me to show that they’re real people,” said Sodahl, adding that a surgeon consulted on the script.

Sodahl, whose 2010 film “Limbo” nabbed 10 Amanda (Norway’s top film prize) nominations, said she was not inspired by any particular film while making “Hope” since this was such a personal project, but she did think of Michael Haneke’s “Amour” at an early stage.

“In ‘Amour,’ Haneke tells the story of this couple in a very contained way, there is no drama going on elsewhere and the suspense is maintained throughout the film. You experience the film with your guts, like in my film it’s not sentimental and there is no place for grief,” said Sodahl. Since the film unfolds between Christmas and New Years’ Eve, the story is structured like a “countdown.”

Even though Braein Hovig and Skarsgard are in almost every shot together, they had not met before the start of the rehearsals. “It was like a blind date. It was very frightening for the three of us but I was quite confident that they would get on,” said Sodahl. “They’re an odd couple, she’s feisty and petite, he’s tall and phlegmatic. But that oddness brings out a lot of energy and chemistry between them.”

Sodahl said that in contrast with the grave subject matter of the film, the atmosphere on set was much lighter thanks to Skarsgard and Braein Hovig, who each have a “great sense of humor.” “They would find humor in some of the human inadequacy and absurd situations depicted in the film.”

Next up, Sodahl is developing “Man Watching” (working title), the story of a European girl in her early 20s who travels alone to Mexico to find her own identity. While there, she experiments with new things and reinvents her own persona.

“The idea for ‘Man Watching’ came about by reflecting on how young people move around today in a globalized world, compared to my own experience as a traveler in the mid-eighties,” said Sodahl, adding that she believes in “the importance of ‘going out there,’ both to get to know your own roots and in order to find out who you are.”