Continue to Variety SKIP AD
You will be redirected back to your article in seconds
Jun 28, 2019 4:39am PT 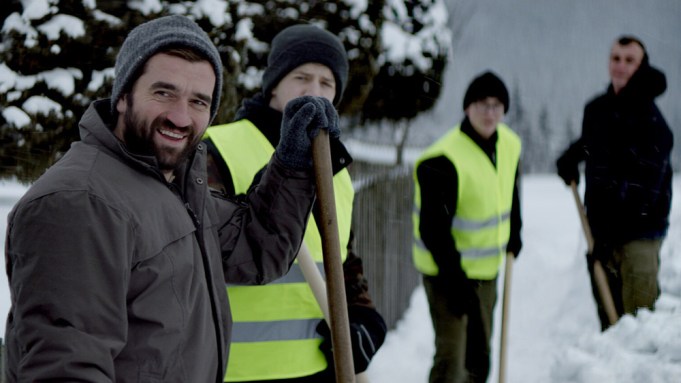 “Let There Be Light,” a contender for the Crystal Globe at the Karlovy Vary Film Festival, takes on troubling issues confronting Eastern Europe as a Slovak father, pushed to work abroad in the hopes of buying his family a better life, discovers his absence has allowed his eldest son to drift into a dangerous political fringe. Inspired by current events, writer/director Marko Škop takes on proto-fascist youth brigades and small-town intolerance in his sophomore feature. The film has its world premiere on Sunday.

How did the rise of so-called youth “Guard” groups factor into your thinking about what could drive a family apart?
For me the core of the film is the theme of a “missing father.” For the main character, Milan, it started with his father and his cold upbringing. He wants to be different: He would like to give his own children much more. In order to provide for them he works as an economic migrant in Germany. He loves them but he is not present. The eldest son becomes a part of a youth paramilitary group. Their existence in Slovakia is a reality quite often covered in newspapers. Open far-right ideological indoctrination of young people is a real and discussed question in Slovakia.

How serious is the vigilante problem in Slovakia and is it getting worse in the current climate of right-wing Eastern Europe leaders?
Society in the whole of Western civilization is very polarized nowadays and my impression is that it is getting worse and worse – also because these voices influence each other across borders in a global environment. Everybody hears strong statements from Trump, Farage and other influential conservative politicians. In Slovakia the extreme party of Kotleba ended in third place in the recent elections to the European Parliament. And this party comes mainly from the heritage of political views of the so-called Slovak state, the puppet state of Nazi Germany during World War II.

Your protagonist Milan has an awful lot on his plate – he travels to Germany to earn then is accused of being an absentee parent by his wife. Does he represent the predicament of a lot of Slovak family providers?
We were shooting in the region of Orava in Northern Slovakia. When locals asked about the main plot and I explained it to them briefly their response often was: “Yes. The parents are abroad and children here go wild.”

Was it difficult to get the funding for a film that shows such ethically conflicted Slovaks and a morally corrupt church?
Actually not. We received support from the Slovak Audiovisual Fund, the Czech State Cinematography Fund and both national public television stations came on board as co-producers. They all found the project important. The same applies for the Eurimages fund, which helped us with gap financing.

Your background in documentary seems to have helped you with placing characters in real or realistic settings. Are the hazards of location shooting worth it to you or do you sometimes prefer filming on a set?
I was dreaming about a lot of snow in exteriors but in the first two weeks of the shooting there was none. We had to reschedule the shooting plan on a daily basis. It was very tough but we managed and the result is as I wanted it to be – authentic in its mood. The final visual look is always a very important element for me.

This film is a debut for five young actors. How did you work with them to get the best performances on camera?
I was looking for a good actor who could play the role of the eldest son for six months. When I finally met František Beleš at the casting it was like a little miracle. He was very mature for his age and a real partner in discussions about the right “temperature” of every scene. He was very curious too and I told him many times “You could direct a film one day.”

How common is it for a man like Milan to maintain such a gun collection? It tends to make you think that the film will end with a massive shoot-out…
I was doing a lot of research among Slovak gastarbeiters [guest workers] and in the house of one family I found a cubicle in the bedroom with this collection of old guns. The art director with the prop masters reproduced almost the same thing for the film. Collecting guns is a hobby for many. The reason might be a strong symbolic castration on the part of their father. So I put it like that into the script and film.

Your previous film, “Eva Nova,” also examines the conflict between traditional small-town values and characters with bigger ideas – is this a dilemma that drives your writing? Are there other films on this theme that have inspired you?
In modeling the main character, I started from the point of a cold education. It’s one of the basic stories of humankind. I adore the approach to this topic in recent work, for example in the film ‘Loveless’ by Andrey Zvyaginstev in the East or in the film ‘Happy End’ by Michael Haneke in the West.