Helena Trestikova on the Making of Her Milos Forman Documentary 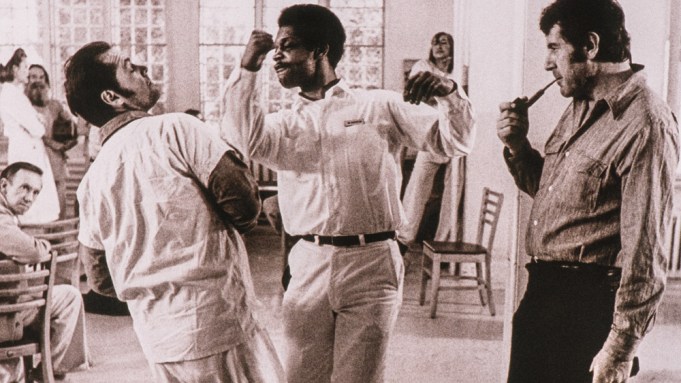 Czech documentarian Helena Třeštíková has won accolades worldwide for her decades-long chronicles of ordinary subjects struggling through life as seen in “Rene” and “Mallory.” With her portrait of Miloš Forman’s life, work and philosophy, “Forman vs. Forman,” she takes on a different kind of target, working to find new insights from archival materials. Working with editor Jakub Hejna, Třeštíková says they discovered never before seen footage that gives voice – along with narration added by Forman’s son Petr – to a fascinating look back at the life of the two-time Oscar winner. The film screens Sunday at Ji.hlava Film Festival.

You’ve said Forman inspired you to pick up a camera when you were a teenager. How was it when you finally met him?
Miloš Forman was my star from my childhood but I met him about 10 years ago in New York. He invited me and my producer and we spoke about current films, and then we met five years ago in Connecticut, but he was ill and not in good form. I have a very nice letter from him – he saw my film “Rene,” and he wrote to me that he admired my film.

I saw his first Czech film, “Audition,” and it changed my life and I decided to be a filmmaker when I was 13. It took as much imagination as deciding to be a cosmonaut on the moon.

Did anything strike you as different from his larger-than-life image when you met him in person?
He was totally authentic man and he knew how to tell stories and make a point. He was a great storyteller – always to the point. It was his specialty. And he was never arrogant – always friendly.

But he was known a bit for torturing actors, no? He flew two women to Prague for “Amadeus,” and kept each there for a while before telling them which would get the role of Mozart’s wife…
I think that was for a purpose, though – because he needed to get an emotion that he needed to see in the film. I’m almost sure that in his private life he would never be able to do that.

What was your thinking on incorporating the voice of Forman’s son Petr so seamlessly into the narration?
From the very beginning in thinking about making this film was the idea that Miloš would be the one who would narrate. He always said, “I love stories and I am a storyteller.” So our aim was that he would be speaking about his own story.

A lot of these stories we were able to take from other documentaries about Forman. But sometimes there was something very important missing. But we know these other stories from books and interviews and radio talks. So we decided to ask Petr to be the narrator of the film after Miloš died.

How did you go about matching the style and tone of the voices?
Petr adjusted it so “it would be like my father telling the story.” So he modified these texts. On first hearing him we thought they have very similar voices. But now when we see the film, I think it’s not so true.

I would have sworn it was Miloš narrating the whole time and I kept waiting for Petr to come on the voice track.
I’m happy to hear that. Thank you!

Miloš Forman had a very special way of speaking too – his English was still strongly accented and a little broken even after all his years in the U.S., as Michael Douglas kids him in the film.

It is mostly Miloš’ voice. All the stories about filming and the process of filmmaking are always Milos. Petr comes in when he’s talking about the parents and the missing parts of the story. Material was taken from various documentaries from all around the world. More than a hundred different sources, not just interviews but background material.

What were the last-minute finds you made in your research that prompted you to recut the film to include them?
There were two crucial discoveries – one was from some making-of footage from “The Firemen’s Ball” and the second was from an interview in 1968 at Cannes. It was a time of great political upheavals – very shortly before the Russian-led invasion of Czechoslovakia. So it was fascinating to hear Forman’s thoughts on freedom and the relationship between art and freedom. And the various restrictions put on art. And interestingly, he said all this in his swimsuit, which is very funny.

Did Forman ever regret pulling his film from the Cannes competition that year? He did it in solidarity with the French filmmakers but it looks a bit like he didn’t understand exactly what the protest was about.
Yes, I think at the time when it happened he did have some regrets. But after he succeeded in America and made so many films it was a great story to tell for him by then.

How did Forman influence your filmmaking?
He always said he loves documentaries – but what’s missing for him is a story. So in my time-lapse documentaries I was always trying to bring the story to the documentary. And I think Forman was aware of that when he saw my films.

It seems that you and Forman both share a love for small, ordinary moments and the truth in them – he was known for filming minor characters as much as leads and you also tend to skip the main events in people’s lives and instead film daily life before or after.
This was always an intuitive choice for me. I never consciously was influenced by Forman on this but maybe I adapt or adjust the situation to my storytelling. But he definitely inspired me to watch for the little, ordinary people and their stories.