‘Half-Sister’ Director Damjan Kozole on Compassion, Learning From the Past 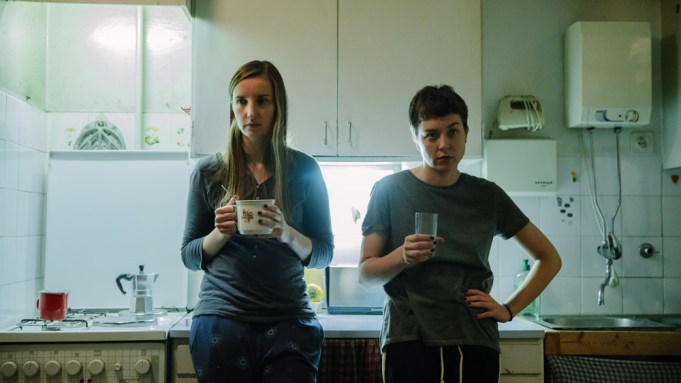 Two estranged half-siblings from a small coastal town in Slovenia spend the better part of their young lives ignoring each other’s existence. But when circumstances force them to move into the same cramped apartment, they have no choice but to come to terms with the past that binds them, while trying to decide how to build a future for their fractured family.

“Half-Sister,” by Slovenia’s Damjan Kozole, world premiered at the Karlovy Vary Film Festival, where Kozole won the best director award in 2016 for “Nightlife.” The film plays this week at Sarajevo Film Festival.

Kozole spoke to Variety about the strange, real-life circumstances behind his latest feature, the importance of moving on from the past, and why life “would be so easy if we just talk to each other.” Variety has been given the exclusive first-look of the trailer.

What inspired you to make “Half-Sister”?
A few years ago, I found myself in a strange situation. I had to confront the possibility that there could be somebody who shared my blood of whom I wasn’t aware. From that confused, strange and very strong feeling, there was the starting point for a story about two women who barely know each other. It was some personal moment in my life which was the inspiration for the film.

How did that evolve into the story of two estranged half-sisters grappling with their relationship?
As usual, I rarely start with the story. For me, cinema is more about moments, situations, feelings and characters, more than the story. It was such a strong and confused feeling to confront the possibility that there could be somebody [I was related to] and I didn’t know about him. This feeling stayed with me for probably a month…[and was] a starting point for a story about how you could deal with somebody who shares your blood, but actually you hate him, and you don’t know why you hate him. And that could also be a metaphor for many people in this world who hate each other, and they don’t know why. For me, this story was more universal and wider than just a story about two half-sisters in one small apartment.

Urša Menart is both a co-star and co-writer of the script. What is it like for you as a director to work with an actress who had a hand in writing the film?
It was so unintentional. Ursa was the first A.D. of my previous film, “Nightlife.” We started to write the script for “Half-Sister,” and then she was again first A.D. We had quite a big casting [for the role of Irena]. I was not satisfied with the actresses. We have very good actresses in Slovenia, but I just didn’t see Irena in any of them. So one day I asked her, ‘What do you think if we do the casting with you?’ She was so shocked. Even for me it was a strange idea, because she never acted. She just finished [directing] her first feature [“My Last Year As a Loser”], and she went to work with me as first A.D. and co-writer, and she ended up as a main character.

Both sisters struggle to communicate with each other; they also have a hard time being honest with themselves. They both accuse each other of being self-obsessed, and wrapped up in their own lives. Do you think the compassion and the empathy that they learn to show each other over the course of the film also, in a way, is important for them to know and understand themselves better?
I believe this film is sad and optimistic at the same time. Nowadays, communication is almost everything. It is just my obsession. I like to watch people at the airport, or any public place, how they dress, how they interact with each other. Communication is not only verbal. There are many interesting forms of communication. For me, this is a film about people who are incapable of compassion and showing affection, and it’s a film about people who simply cannot communicate normally. In our lives, it would be so easy if we just talk to each other, and without prejudice.

This is, of course, a story about the past. It’s a material proof for a father’s betrayal. But for me, it was much more interesting how they interact, how they communicate in such a small place like one apartment in Ljubljana. I was always fascinated by the idea of Hitchcock, who once mentioned he had the idea to set an entire feature film in one telephone [booth]. Not because of tiny budgets, but I like films that are set in one or two or three places, which for me [puts] pressure on the characters for much tighter communication and relationships.

There’s a lot of dark comedy in “Half-Sister.” Do you think humor is a necessary survival skill — a way to get through difficult times?
Life is always part funny times, and part depressing times. My previous films were pretty depressing, and I said enough is enough. After two quite pessimistic films, “Slovenian Girl” and “Nightlife,” I just needed to do something more positive. And I think we live in such a strange and dangerous time that we really strongly need something positive and optimistic.

There’s a generational divide in this film, where both Irena and Neza bear the scars of their parents’ choices. Do you believe each generation has a chance to start fresh and build something new with their lives?
For me, this film has always been quite difficult to describe, because it’s in between the lines. It’s a simple story about complicated feelings. Probably one idea which comes out of the story is that younger generations should produce some things from the past and go further. I just wanted to remind ourselves why we do what we do and what’s important in life.

What’s important in life?
To go forward. Not to live in the past, like Slovenian society and many societies in Europe. Slovenian society is completely divided. Many people still live in 1950 with the problems [of that period]. I think maybe it’s time to go on to some other subject, not to stay in the Second World War.