Continue to Variety SKIP AD
You will be redirected back to your article in seconds
Sep 23, 2019 7:07am PT 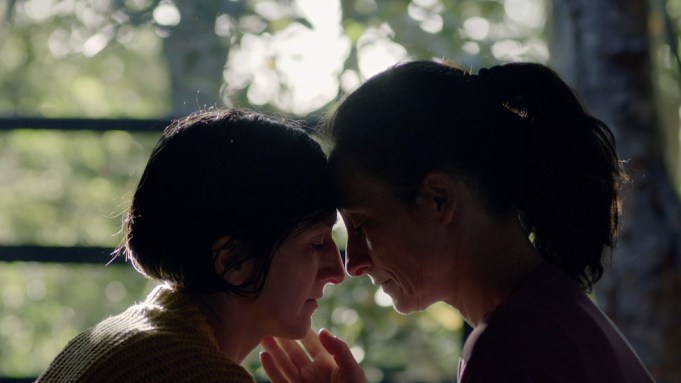 SAN SEBASTIAN — “Death Will Come And Shall Have Your Eyes” Italy’s Cesare Pavese wrote memorably in a poem that enchanted Chilean film director José Luis Torres Leiva a decade or so back.

Now he delivers a film of that title which world premieres at San Sebastian in main competition and talks about death without, Torres Leiva hopes, either clichés or stereotypes. As in his first fiction feature, the breakout “The Sky, The Earth and The Rain,” which won him a Fipresci international critics’ prize at Rotterdam,plot in “Death Will Come…” is light. Confronting María’s terminal cancer, a lifelong female couple, Maria and Ana,  retreats to a cabin in the woods where their love, buried by routine, reignites. “Suddenly, hope appears, imprinting the heart of the story with life and happiness.”

Produced by Catalina Vergara at Chile’s Globo Rojo Films, Paulo Carvalho at Germany’s Autentika and Argentina’s Constanza Sanz Palacios Films, “Death Will Come”  “talks not about the end of a life but rather the beginning, the possibility of something new, of hope in those that remain alive, an internal discovery key to growing as a person,” Torres Leiva said in a director’s statement.

This is a sense-drenched mood piece, the trailer suggests, evoking taste (a man eating an apple), physical sensation (a women in a pool, María being washed), touch (Ana holding María, the two cuddling up in bed), sound (birdsong, a song sung in a bar, and emotion, as María makes a confession to Ana.

According to Torees Leiva, one reason to make “Death Will Come…” was to work with its leads, Amparo Noguera (“Tony Manero,” “A Fantastic Woman”) and Julieta Figueroa, a regular Torres Leiva collaborator (“The Sky, The Earth and The Rain,” “Verano,” “Obreras saliendo de la fábrica”). He wrote his screenplay with them in mind, and co-developed characters with the actresses.

“Death Will Come And Shall Have Your Eyes” was pitched as a project at San Sebastian 5th Europe-Latin America Co-production in 2016. Buenos Aires-based Compañía de Cine holds international sales rights.

“It’s a film which stresses bodies (healthy and ill) and faces like landscapes of human nature,” Leiva Torres commented. “It’s a film about love, death, family, the need to create close bonds which go beyond any condition or gender.”