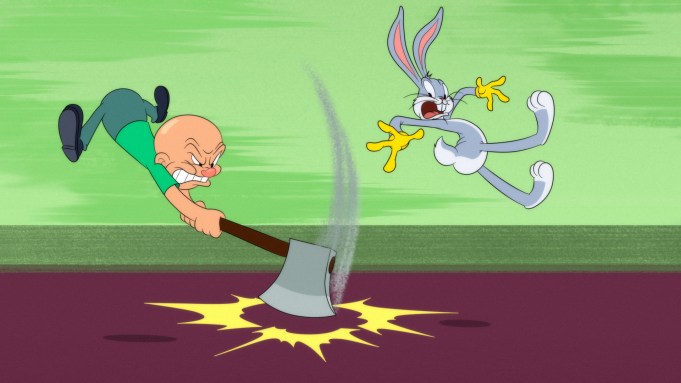 ANNECY, France — One of the most highly-anticipated presentations at this year’s Annecy Intl. Animation Festival was the world premiere of a slate of new “Looney Tunes Cartoons” shorts. To celebrate the occasion, and include fans from around the world that couldn’t make it to French festival, Warner Bros. Animation has shared an exclusive 90 second short with Variety.

As classic as they come, “Dynamite Dance” is an explosive thrill ride featuring Bugs Bunny and Elmer Fudd, dressed in his traditional brown hunting suit and hat, in a cartoonishly-violent, non-verbal and classically orchestrated back and forth.

Set to Amilcare Ponchielli’s classic “Dance of the Hours,” Elmer fails time and again to get his hands on bugs, instead ending up with hands, mouth and ears full of the iconic red sticks of Acme dynamite.

The short was one of more than a dozen which screened this week at Annecy, two on opening night – “Mummy Dummy” and “Wet Cement” – the rest at Wednesday’s presentation.

Browngardt, “Looney Tunes Cartoons” upervising director Alex Kirwan and Warner Bros. vice president of series Audrey Diehl led the hour-and-a-half laugh fest, taking intermediate breaks from the cartoons to give a behind the scenes look at artwork, animatics, a storyboard pitching session and a live orchestra recording of some of the franchise’s most iconic music.

“We are approaching each short as its own film, and not as an episode in a series,” explained Peter Browngardt, executive producer of the rebooted cartoons in an interview with Variety before the festival. “Our mantra on the shorts is story, comedy and reverence for the classic Looney Tunes of the ‘30s and ‘40s and the way they used a more cartoonist driven animation.”

The individual nature of each short has put a heavy workload on Kirwan’s shoulders, as he is the man in charge of the show’s design team. What it means, is that each short has a new set of backgrounds. Porky and Daffy never show up in the same house, Bugs in the same rabbit hole or Wile E. Coyote and the Road Runner in the same desert.

“We’re not making it easy on ourselves; let me put it that way,” he joked. “It’s a lot more work, but with something like the Looney Tunes, something that’s part of the culture of the world, there is a responsibility there.”

“We are a group of cartoonists together in a room and we draw funny gag drawings and come up with wild scenarios,” Browngardt said, explaining that they don’t use screenplays or screenwriters. Each shorts start as a series of sketches and gags that have made the artists laugh.

“I feel like that is what made the classic Looney Tunes so fantastic,” he went on. “It wasn’t screen writers; they were thinking completely visual all the time. I feel like the best cartoon animation comes from that process.”

According to Browngardt, of the 200+ shorts that will be produced in this batch of cartoons, 20-30 are already completely finished, with close to 150 others in various stages of production from storyboards and on. In the end, the studio will have created more than 1000 minutes of new Looney Tunes content.

At the moment, a finalized distribution plan has not been announced, but the Warner Bros. Animation team hasn’t ruled out anything. It seems likely then that “Looney Tunes Cartoons” could end up on traditional broadcast networks, digital platforms or perhaps accompanying feature films in the theater.

Before ending with the now-finished Porky and Daffy short, screened in progress at last year’s Warner Bros. Animation studio focus in Annecy, Browngardt credited his older brother for instilling his love of animation, and recalled a trip to NYC to see Chuck Jones screen a collection of shorts when he was just a child.

“That was the first time in my life that I experienced watching cartoon animation with a live audience, and there is nothing like it. To be here today, and share these with a live audience was really special,” he finished, perhaps choking up a bit before starting the last cartoon.