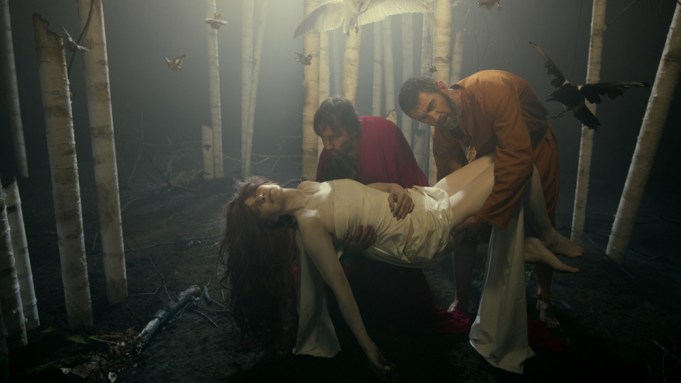 In Roz Mortimer’s “The Deathless Woman,” a main competition entry at the 23rd Ji.hlava docu fest, a British woman becomes increasingly obsessed with answering the call of a Roma Holocaust victim whose soul is seemingly reaching out from an unmarked mass grave in Eastern Europe.

The film, which mixes interviews with Holocaust witnesses, evocative Romani-language voice-over, archival material and performance, sets out to provide closure to the restless spirit of one woman who refused to die easily when gunned down by the SS. “I’ve been here for a long time,” the Deathless Woman intones – “plenty of time to think. To feel my rage swell.”

She found me. I was doing some field research into unmarked Roma graves from World War II and a strange series of events led me to her grave. She was the matriarch of the Kwiek family, who were murdered by German soldiers in 1942. I felt that she had drawn me to her grave and I began to write in her voice – it was almost like a possession. That was back in 2012 and those pages in my notebook eventually became the basis for this film.

The technique of mixing performance, archive materials and field footage is an outgrowth of a form you’ve been working in for some time – what did you want to add to this mix here?

This film feels like pulling all the strands of my previous work together – the theatrical tableaux, performance, first-person testimony, field research, the political intention. Working in a scripted long form was new, as was the scale and breadth of the story.

Did you know first you wanted to do something about the rise of the far right in Eastern Europe or were you more interested in the untold stories of the Roma Holocaust first? Did one idea lead to including the other?

I started by simply looking at unmarked sites of atrocity in Europe – I was interested in what happens in society when atrocities aren’t historicized and was thinking about how this might link to present-day prejudice and intolerance.

I was developing the film at a time when there was this surge in fascism in the U.K. and across Europe and once I started to dig deeper into the situation for Roma in Europe today, the rise of the far right became the driving force behind the film.

It shifted from being a film about the past to being about the here and now.

The voice-over in the Lovari dialect of Romani is quite powerful and characterful – how did you come across this voice actor and what did you feel she would bring to the film?

It was important to me that the Deathless Woman spoke in Romani language and we had a long search for the right Roma actor. Eventually we found Iveta Kokyova in Czechia [Czech Republic] through a social media search.

She had never acted before but sent me an extraordinary audition tape. As soon as I heard her voice I knew Iveta could bring the restrained intensity necessary for this character and during the recording she brought a lot of her own ideas, emotion and life experience to the role.

The list of sites of Roma attacks and killings in the end titles is quite breathtaking. Were you surprised in your research how much violence this group continues to face in Europe?

Yes, it was surprising and deeply upsetting. Particularly how much of the violence appeared to be state-sanctioned. I had to do the research for the list in batches as it was overwhelming. Likewise, for the research into the hate speech. All of this took me to some pretty dark places and it felt important to put it on screen for everyone to witness.

You have the impression your lead actress, Loren O’Dair, is presenting evidence at some kind of formal proceeding – but also defending the whole idea of researching unmarked Roma mass graves. What was your thinking in writing these scenes?

The Seeker is defending her methods to an unseen panel of historians. They are not exactly hostile but the Seeker’s research methods are unconventional. She is teaching them as much as being interrogated by them. History and historiography have failed the Roma and maybe there is something to learn from her alternative methods.

What appealed to you about the symbolism of the lost Polish bird and the Seeker being pursued by messages from beyond?

These are the things that happened to me and around me when I was first thinking about the film. The birds, the uncanny events that led me to the grave of the Deathless Woman and many other strange things that I can’t rationally explain.

I have always worked with animals in my films, often as symbols or ciphers. In this case, the animals are messengers from the Deathless Woman – they draw the Seeker to see the right things.