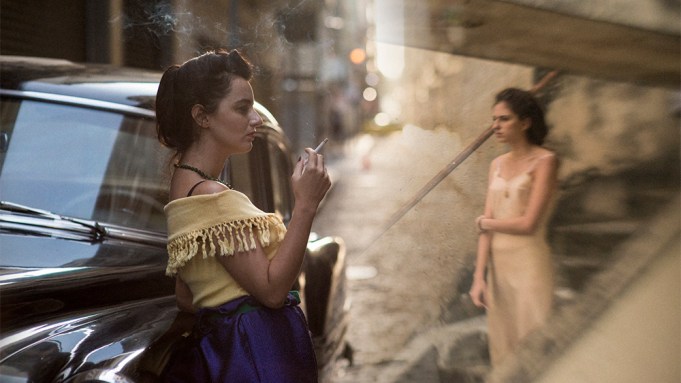 Karim Aïnouz’s “The Invisible Life,” which won the Prix Un Certain Regard at Cannes and screens this week at the Karlovy Vary Film Festival, begins with two sisters, not much over 20, Eurídice (Carol Duarte) and Guida (Julia Stockler) sitting by the shore of one of the multiple bays around Rio de Janeiro, a lush tropical forest behind.

They have all their lives in front of them. Guida suddenly dashes off clambering uphill barefoot through the trees; Eurídice, more reflective, two years younger, a talented pianist, tries to follow, is overwhelmed by the sensuality of the setting.

Set over 1951-58, with a modern-day coda, “The Invisible Life” begins with the last time the sisters are caught together in a moment of quiet intimacy. Soon after, Guida elopes with a sailor to Greece. In classic melodrama mode, she returns alone from Europe, pregnant, is thrown out by their father, who makes her believe that Eurídice has gone off to Europe to pursue a brilliant career as a pianist.

In reality, Eurídice does the dutiful daughterly thing and marries the son of her father’s rich associate, stays in Rio, not so far from Guida, now a single mother. Putting motherhood before a potentially brilliant career as a concert pianist – Eurídice ends up locked in a loveless marriage. Guida writes to Eurídce via their parents. The letters are never delivered.

Aïnouz has said that Douglas Sirk’s “Imitation of Life” is one of his favorite films. It shows in “The Invisible Life.” But though Aïnouz, in a film about the ’50s, adopts at times a style now famously regarded as one of the highpoints of ’50s cinema, “The Invisible Life” modernizes but never mocks the melodrama genre in a movie which can be utterly stylish, but shows just how physically punishing life was for women at that time. Just how much it has really changed in Brazil is open to debate. Variety talks to Aïnouz about “The Invisible Life,” which bowed to strong reviews.

Though based on a novel, “The Invisible Life” has I think a personal inspiration….

It goes back nearly 30 years. I made my first film in 1991, buying a video camera, a portrait of my grandma, because she was 80. I loved her so much. My grandmother had two kids, two women, my mother and my aunt. Her husband left her around 1932. She had to raise these kids alone. It was really tough, initially, even to get a job as a separated woman. She became a seamstress. It was not what she wanted, but what she could do, and she did it brilliantly.

Your mother had the same experience?

Exactly. When Rodrigo [Teixeira] gave me the book, my mother would have been 90 that year, the same age as Eurídice. I was raised by my mom alone. My mother was the father, my grandmother was the mother. Rodrigo gave me the book at the moment that my mother was passing away, in 2015. I remember thinking and knowing what she had been through to raise me. She never really talked about it, but  I thought, my God, it would be so important if people who met my mother knew what she had to go through. Both of them worked, my grandmother and my mother. When I read the book, I felt, wow, finally somebody is talking about what it was like to be a woman at that time in Brazil, but also in the world. Adapting the book, I realized I could pay homage not only to my mother, but also to her generation.

There are enough female characters in the film who are single, or seem abandoned, to get a sense that this is more than just about two sisters, it’s more general…

Absolutely. Brazil is one of the countries in the world with the biggest number of single mothers and crimes against women.

One reading of the title is that it refers to Eurídice’s inner life which was once so rich and then strangled by her father, her husband….

There’s one shot in the film that translates that, when she burns her piano and sort of burns her dreams. She’s there at the doctor’s, at the back, and her face becomes just a shape. I wanted to talk about a character who becomes invisible, who is silenced. When the film cuts to the present, it’s as if Eurídice has been absent, quiet for 60 years. I’m not going to say she finds a voice because it’s too late. But at least she sort of makes sense of the network of lies she was submitted to and the consequences.

“The Invisible Life” is set in the 1950s. It’s as if you look for a style of ‘50s filmmaking which is relevant to your subject, and you find Douglas Sirk and his ironic vision of how a conservative American consumer society served to position and limit women.

Absolutely. With the challenge – and I’m not sure if I achieved it or not, we’ll see in the next few months – that for me, the film talks not only to women of that age but to young women. Some codes of classic melodrama needed to be fractured, broken.

Less prudish. There is something very prudish about melodrama. Fassbinder is a complete departure, that was very inspirational, as was the work of a Portuguese filmmaker who I really love called João Pedro Rodrigues, who also works a lot with the genre. For me, the question was how to make melodrama relevant today, seductive to young audiences. How do you break some of the codes of classic melodrama which was very much produced in the McCarthy era?

That can be seen in the extraordinary wedding night, which portrays a kind of institutionalized rape.

Yes, it’s exactly that. For the movie, I’ve interviewed a lot of women from that time, who are now about 80 and 90. What was it like for women from that generation to see a naked man? Can you imagine: You’ve never seen a naked body, and then you do and you have to have sex with it. There was a woman that I interviewed who said that her husband had sex with her on her wedding night eight times. Because it was O.K. It was his wife, and he could do whatever he wanted. Good melodrama is also about irony, bad melodrama is not about irony. It was very important that this scene had a certain physical cruelty to it, that isn’t there in classic American melodrama.