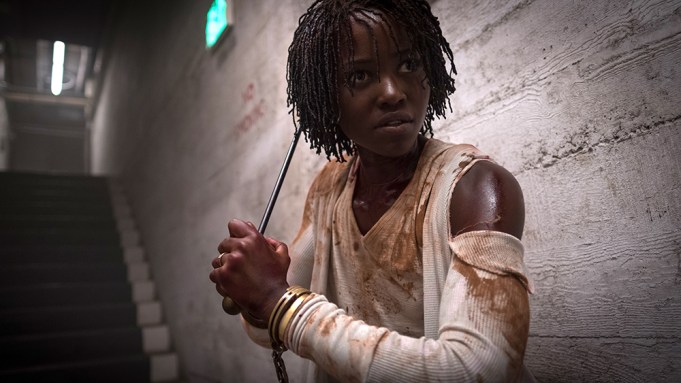 In Austin, everyone can hear you scream. And there seemed to be plenty of shrieks, squeals and even a few sobs at the premiere of Jordan Peele’s latest opus, “Us,” at South By Southwest on Friday night.

This film festival in Texas has a strong track record of launching studio blockbusters. Last year, “A Quiet Place” screened here before raking in an astonishing $340 million worldwide.

Judging by the ecstatic reaction after the screening of “Us,” Peele doesn’t need to worry about a sophomore slump, following the success of his Oscar-nominated “Get Out.”

Is “Us” as scary as the trailer? More so.

Is the story of a cookie-cutter family (led by Lupita Nyong’o and Winston Duke), who fight off blood-thirsty clones on their summer vacation, less political than “Get Out?” Not really.

At a Q&A following the screening, Peele revealed — without mentioning the president’s name — that “Us” was inspired by Trump’s America.

“This movie is about this country,” Peele said. “And when I decided to write this movie, I was stricken with the fact that we are in a time where we fear the other: whether it is the mysterious invader that we think is going to come and kill us and take our jobs, or the faction that we don’t live near that voted a different way than us. We’re all about pointing the finger, and I wanted to suggest that maybe the monster we really need to look at has our face. Maybe the evil is us.”

“Us” nods at some of the great directors — from Ridley Scott to Stanley Kubrick. And a character is spotted wearing a “Jaws” T-shirt, which seems to imply that Peele is intent on becoming the Spielberg of his generation.

“My creative process is this conversation between my gut and my mind,” Peele said. “So in the beginning, usually, what needs to happen is I need to start with something that I’m feeling, whether it’s a dream or usually some condensed feeling or a fear that’s just there. I think about it, I try to analyze it. When I get sick of that, I take a break; I sit down and I try to find inspiration. It’s a dialogue within myself. I couldn’t really tell you what comes first. Is it the place? Is it the themes? Is it references to the Bible or movies or anything? It all it’s all very fluid and analytical at the same time.”

There was an electric energy inside the Paramount Theatre as the movie was about to debut. “What if I just showed four episodes of ‘This is Us?'” Peele joked as he introduced “Us.”

The room was packed with locals and industry faces, including Jeffrey Katzenberg, Shia LaBeouf, Nick Kroll and Elijah Wood. Elisabeth Moss, who has a supporting role in the film, nibbled on a bucket of popcorn as she laughed and screamed with the rest of the crowd.

When someone at the Q&A asked what scared the actors, Nyong’o turned to her director. “Working with Jordan Peele terrified me,” she said. “With ‘Get Out,’ I was like, ‘Oh my god!’ He does such incredible things with story, to think I was going to be working with him next, I couldn’t compute it in my head. It’s not about getting rid of fear. It’s about using your fear as fuel.”