“My Life as a Zucchini” French producer Blue Spirit will serve as the animation studio, as on the Didier Brunner-produced 1998’s Kirikou movie, hit TV series “The Long Long Holiday” and on Brunner’s Academy Award-nominated animated features “The Secret of Kells,” “The Triplets of Belleville,” and “Ernest & Celestine.”

News of the Folivari-Studiocanal-Canal Plus development pact comes as Folivari has unveiled that a third season of TV series “Samsam” is now in the works, further producers on “The Nazis, My Father and Me,” a new projects: “The Seven Dwarf Bears.”

With Everest epic “The Summit of the Gods” now in production, the new titles mark in general a move from exquisite art films with which Didier Brunner carved out his reputation towards movies which may be bigger in scale – “Summit,” “Nazis” – and series which represent premium entertainment for traditional broadcasters and global platforms alike.

Neither “Summit” – the tale of  a solo attempt without oxygen in Winter on Everest’s South-West face – nor “The Nazis, My Father and Me,” – Nazi thugs pursuing a 12-year-old through the streets of 1941 New York – seem obvious subjects for animation. On both, or the realism of “The Baker Street Four,” Folivari, like other modern animators, is attempting to break down the walls of animation, affirm its status as a medium not a subject-prescribing genre type, just like Jeremy Clapin’s feature debut, rave-reviewed “I Lost My Body,” which won Cannes Critics’ Week last month. “With the Grand Prix for ‘I Lost My Body,’ the classic film industry will understand more that an animated feature can just be a good and beautiful film,” Damien Brunner observed.

“The Baker Street Four” is based on six French comic books, “Les quatres de Baker Street,” written by Jean-Blaise Djian and Olivier Legrand and illustrated by David Etien, and inspired in turn by Arthur Conan-Doyle’s original characters, which appear in several Sherlock Holmes novels, a gaggle of street urchins, led by Wiggins, whom Holmes paid to act as grass-roots intelligence agents.

In the TV series, as the graphic novels, the Baker Street Four will be three ragamuffins, befriended by Holmes, and include who’s forced for safety’s sake to disguise herself as a boy.

The kids discover in an early episode that a Bond-style arch villain is plotting to purloin plans for the first reliable military-use submarine – some two decades before their widespread WWI usage.

Conceived by Studiocanal and Canal Plus as “highly premium,” said Damien Brunner, and targeting 8-12s, Didier Brunner added, the series is made up of six two-part one-hours or 12 half-hours with each episode ending on a cliffhanger, giving the series a stronger overall narrative thrust, Brunner said.

“If sold to a broadcaster, we’d recommend the two-parts of one hour to be broadcast back-to-back. Every two-part hour also has a fuller sub-story,” said Brunner, who deployed this structure highly successfully on “The Long Long Holiday,” a hit on public broadcasters France Televisions and Germany’s ZDF, and licensed to Netflix for the U.S. and Amazon Prime Video.

“The fame of Sherlock Homes will make then series appeal to global platforms and broadcasters alike,” he added.

The animation, most probably 3D with 2D rendering, like the “Ernest & Celestine” TV series, will channel an “Oliver Twist” ambience and be “realistic, dirty. immersing immerse audiences in the reality of late nineteenth century London. Achieving that would be a victory for the show,” said Damien Brunner.

The series is near written. The partners are still researching the art design, Didier Brunner said.

Studiocanal will distribute and sell “The Baker Street 4.” It may also co-produce, Brunner said. Their partnership reflects their joint determination to roll off and develop big European IPs, capable of driving large international audiences. Few come bigger than Sherlock Holmes.

Produced with and for French public broadcaster France Televisions, “Samsam” Season 3 is conceived as 52 11-minute episodes, distributed internationally by Mediatoons, which sold the first two seasons. Folivari will begin work on “Samsam” Season 3 between the end of the year and early 2020. It will be broadcast on France Televisions  a year or year-an-a-half after “Samsam” the movie.

On other titles, Stéphan Roelants’ Luxembourg-based Melusine Productions has signed on to co-produce coming of age action-adventure movie “The Nazis, My Father and Me,” set in 1941 New York City. Also produced by Tchack, which has handled graphic research, the long-term project marks the feature debut of Rémy Schaepman, who carried out the 2D animation sequences on the upcoming live action “My Family and the Wolf.” 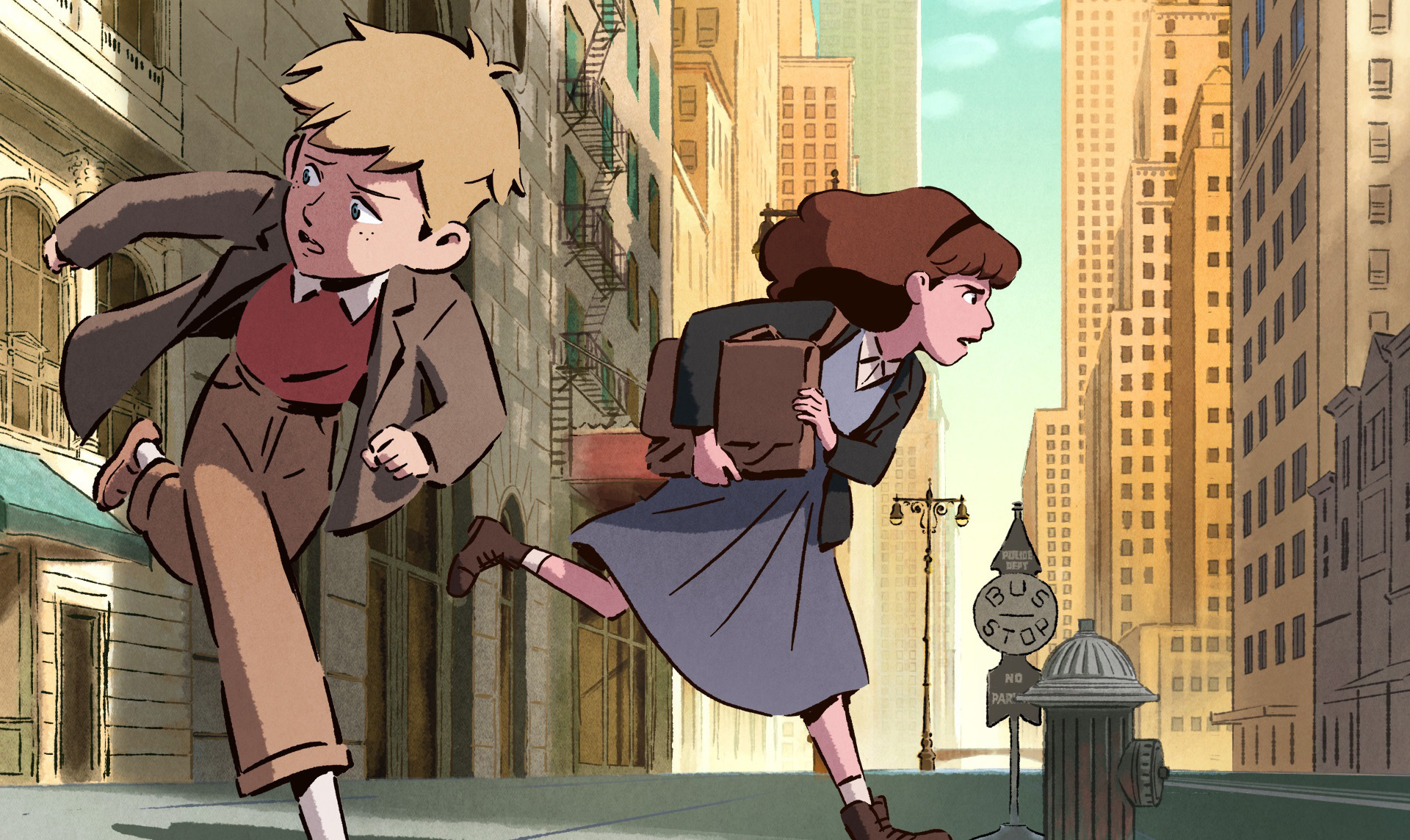 Folivari is now in discussions for a “great art director” and Thomas Meyer’s Stuttgart-based Film Bilder to board the project, Didier Brunner said.

“It’s smart to have a German company co-producing a movie of this kind,” Damien Brunner said. Characters will be in 2D, backgrounds may be in 3D with 2D mapping, New York City will be framed as, apart from the two kids, a third character in the movie, he added.

“A completely zany parody,” inspired by the “The Seven Squat Bears” comic album series, published by Paris-based Spanish comics artist Emile Bravo and nominated for the 2012 Eisner Awards in the category of Best Publication for Early Readers (up to age 7). Bravo worked as character designer on “The Long Long Holiday.”

“We think we could make  a really funny TV series, a comedy which would be very crazy, but delightful and cheerful,” Damien Brunner said.

Bravo is adapting the books, working on the two bibles, writing and design, he added.

The TV comedy will turn on seven tough bears who are almost identical looking, though markedly different in character.

Folivari is also in talks to produce “a feature film project for adult audiences,” adapting Nicolas de Crécy’s “Les amours d’un fantôme en temps de guerre.” A rave reviewed graphic novel with large echoes of WWII which has received rave reviews about a small ghost, pictured in the book as a simple white sheet, experiencing persecution by fascist ghouls, membership of a resistance and first love.

Of previously announced productions, Everest epic “The Summit of the Gods,” directed by Patrick Imbert (“The Big Bad Fox and Other Tales”) is now in production, produced by Julianne Films’ Jean-Charles Ostorero and co-produced by Melusine, entered production this January, with teams now working on storyboard, design, characters, backgrounds and color, said Didier Brunner.

Wild Bunch handles international sales, Diaphana Distribution French rights. The film is backed by France Televisions, Canal Plus, Cine +, the CNC, and the Ille de France and Rhone Alpes regions. It is tracking to be ready for delivery by Cannes 2021, Didier Brunner said.

France Television has commissioned a second season of the TV series, “Ernest and Celestine,” on which Folivari is finalizing development.