‘Blinded by the Light’ Director on Her Sundance Hit, Bruce Springsteen and Why She’d Like to Make a Marvel Movie 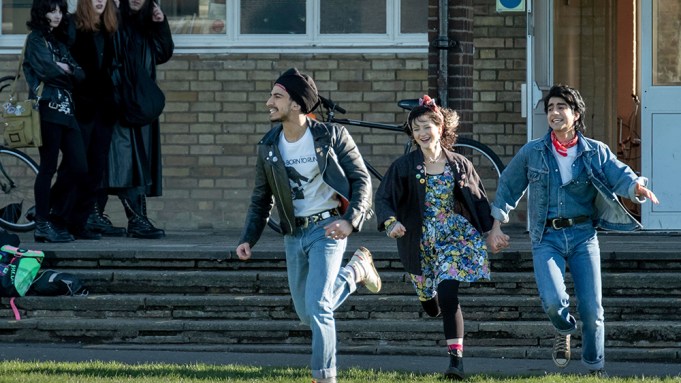 One of the biggest discoveries out of this year’s Sundance Film Festival is Gurinder Chadha’s “Blinded by the Light.” The coming-of-age tale set in 1987 England not only received one of the most enthusiastic standing ovations in Park City, but it also landed one of the biggest deals, selling for $15 million to New Line for world rights.

“Blinded by the Light” tells the story of a British-Pakistani teenager named Javid (Viveik Kalra), an aspiring poet who stumbles upon a Bruce Springsteen cassette tape and develops an infatuation with the Boss, despite his family’s objections. The movie isn’t a traditional musical, but it features a soundtrack of 17 of Springsteen’s songs — it has the spirit of “Almost Famous” enmeshed with “Moulin Rouge.” And the film played through the roof at the Eccles Theater, with an eruption of laughter and sobs similar to debuts of “Boyhood” or “Brooklyn” in past years at the same venue.

Chadha, the British director behind 2002’s “Bend it Like Beckham,” talked to Variety about her movie, how she secured the song rights from Springsteen, and why she’d love to work with Marvel.

What’s it been like for you since your movie premiered?
Exciting. It was genuinely a proper premiere. It was fun watching it with an American audience, because the film is so British. And then, of course, we had a lot of interest.

You’re signing one of the biggest deals at Sundance.
That feels really awesome. As an independent filmmaker, you can’t define your filmmaking with one thing. The next film I make might be really s—, and no one will want to see it. It’s nice to enjoy the highs, because there’s enough lows in our business.

How did you get the music rights from Springsteen?
So the film is based on a book by Sarfraz Manzoor. Sarfraz is like a super fan of Bruce’s. He’s seen him 150 times, so much so that Bruce recognizes him at concerts, because he’s probably the only Pakistani in the audience, and he’s got a big afro. When Sarfraz wrote his book and gave it to me, I said I know how to make this film, but we have to get Bruce on our side.

And then what happened?
In 2010, Bruce was attending the premiere of his film “The Promise” in London. I was invited. I took Sarfraz as my plus one. We stood on the red carpet, hoping to take photographs with him. As he walked down, he banana-ed and walked over to Sarfraz and said, “Man, I read your book! It’s really beautiful.” Sarfraz started hyperventilating. And then I ran over and sort of seized the moment and said, “Hi Bruce! My name is Gurinda. I’m a film director. We really want to make a film of the book.” He looked at Sarfraz and me and said, “Sounds good. Talk to Jon Landau [his manager].”

We knew from that moment, once we had that nod from Bruce, we had to write a script he had to love. Bruce’s words are as much part of the narrative as our own dialogue. We sent it to him, and waited and waited and waited. The message we got back is: “I’m all good with this. Give them what they want.” Our timing was great because he really has been looking at legacy and the impact of his work and what that means for him at his age.

From “Late Night” to “The Farewell,” many of the big movies at Sundance this year have been directed by women.
I think a lot of that has to do with the Sundance selectors. They have gone out of their way: 43% of the films are directed by women. You have almost parity. If you have that industry standard everywhere, then you’ll have a lot more films made by women getting audiences, getting awards.

But when you look at the box office numbers, almost all of the successful movies from last year were directed by men. The statistics aren’t improving. What needs to change?
My film, for example, I think it’s very clear that it’s been directed by a woman. But that doesn’t define it. The way it deals with the subject matter, the way that it deals with the family dynamics, the way that it brings you in as an audience, regardless of race, color, gender, whatever. It’s an inclusive film, and it’s juggling a lot of things. By and large, that’s what women do. They juggle and they are always looking to be inclusive because they are homemakers. We create the next generation. We have this nurturing instinct. The way we treat our characters and bring audiences into those worlds, I think that’s a very female trait. At the end of the day, it’s an industry. What I’m saying makes commercial sense as well as political sense.

Would you ever want to direct a Marvel movie?
Absolutely. Why not?

Which superhero would you want to do?
Well, I actually have my own idea. The great thing about superheroes movies is, I watch them. I have two 11-year-old twins. I loved “Black Panther.” Superhero movies, they are great, but they have to be about something. You have to have that emotional connectivity. They have to be saying something about our world. That’s where I come in. That’s what I do. I comment on what’s happening to society, and I like to be emotional. For me, I can bring that to those kind of big genres. People might not think I can do that, because they’ve just seen me as doing this. But if people can peel back and see it takes a lot of effort to make a film that make people laugh and cry and go away and think about the movie for a long time. That’s because you’re honing your craft and you have a connection with the audience.