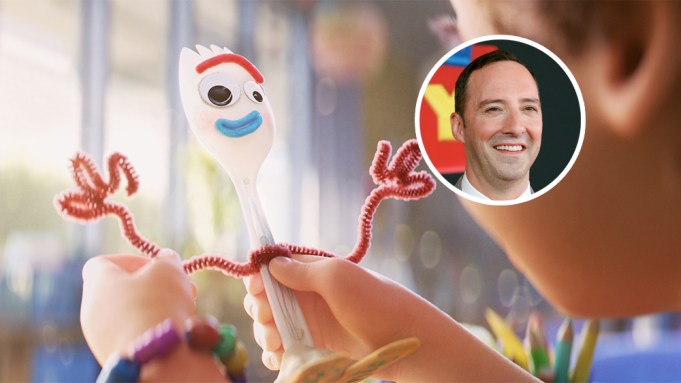 The lastest plastic hero to join the “Toy Story” franchise is Forky, a disposable spork who has some serious qualms about being a toy. He comes to life in “Toy Story 4” alongside Woody and Buzz Lightyear, who teach him that he’s much more than trash. Tony Hale, the actor best known to audiences as Buster Bluth on “Arrested Development” and Gary Walsh on “Veep,” voices the anxiety-ridden utensil cobbled together from loose art supplies.

“Toy Story 4” debuts June 21. Ahead of its premiere, Hale spoke with Variety about how he relates to his animated persona, the trials of voice acting, and what Forky and Gary Walsh could learn from each other.

How do you react when Pixar comes to you and says you’d be the perfect person to play an anxious character who is having an existential crisis?

Pixar described him saying he’s got a neurotic energy, and I was like, “Check. I’m in.” I very much resonated with Forky because he’s so overwhelmed by everything. I feel like I’m just as overwhelmed being part of this film franchise. He comes in and is like, “Why am I here?” And I’m asking the same questions. How did I get here? Him and I are one in the same.

How were you first introduced to Forky?

They showed me a picture and I said, “Wow I love this because he not only sees the world very simply, he himself is made very simply.” What was also cool about the process and being Forky was when I was recording, they’re very protective about the script getting out, so we knew scenes as they were handed to us. It was perfect being Forky because he doesn’t really know what’s going on. I didn’t really know what was going to happen next. It really helped the whole neurosis of the thing.

Did you know how universally relatable Forky would be when you first read the script? Everyone has probably wanted to throw themselves in the trash at some point.

I’ve had those moments [laughs]. I’ve been a huge fan of Pixar because they don’t set out to make message pieces. Forky, his sole goal in life was to help people eat chili and hit the trash, that’s his lifeline. Woody comes along and says, “No, you have a greater purpose. You have more value than that.” That’s pretty meta. Anybody might have moments where they think they have this one-way route to trash, or someone has treated them that way. I love telling people, no you have a much bigger value than that.

What was your first reaction when you heard your voice next to characters like Woody and Buzz Lightyear?

The realization comes in waves. When you’re first doing it, you’re so thankful for the gig and it’s so fun. Then to hear your voice, it’s still kind of not real. I saw a screening of it two months ago and I was like, “Maybe they’re not taking me out of this. Maybe they were serious they wanted me.” When I saw the whole thing put together with music and everything, the movie is just eye-candy. It’s funny and then you find yourself in a corner crying because it’s just beautiful.

What has it been like doing press with Tom Hanks, Tim Allen and Keanu Reaves? Do you all have a group text?

Not there yet. We’re the newbies — me and Christina Hendricks and Ally Maki and of course, Keanu. All of our characters are the new kids on the block. The established group like Woody and Bo and Buzz are very welcoming and warm.

Why do you think “Toy Story” has endured for so long?

What I take away from the longevity is that you see these characters who are incredibly different, but they’re there for each other and they rely on each other and they work as a team. They have found a way to celebrate their differences and work together. We, as a world, need to take a lesson from that. We’re not meant to do life by ourselves. We’re meant to work with people who are different than ourselves. This is a shining example of that for the past 25 years.

How method did you get preparing to play Forky? Did you just eat a lot of chili?

I will say, I’ve become quite an advocate for sporks. They are a very underrated utensil. It’s like the unicorn of utensils, they need a lot more attention. It has a really great purpose. It’s great for a nice thick minestrone soup. It’s just not getting the attention it deserves. It’s the best of both worlds.

Will this change the way you look at plastic utensils?

Yes. I love that Forky’s only flexibility is in his arms. He has no stride. The one time him and Woody are walking, Woody has this fantastic stride and Forky is just trying to keep up. Then he just gets dragged by Woody and he can’t even turn his head, his whole body has to turn. He’s got a lot of limitations.

Then at one point he just asks Woody to carry him.

I mean, who doesn’t want to be cradled by Tom Hanks?

It definitely has its own set of challenges. Especially doing comedy, I get very used to using my physicality like arching my eyebrows or facial expressions. Even to the point where on “Veep,” many times my non-verbal was all I had. I think on “Veep” I was described as a “bitchy mime” because Selina Meyers [Julia Louis-Dreyfus] never let me speak. All I could use was my physicality, so to go into “Toy Story,” you just hope that same energy goes into the microphone.

Speaking of “Veep,” it’s interesting that all Gary Walsh wanted is for Selena to love him, but then Bonnie loves Forky so much and he simply doesn’t know how to process it. It feels like they could learn something from each other.

With “Veep,” watching the final season and how abused Gary was by Selina, it was a nice contrast to go to “Toy Story” and be nurtured by Woody. I think Gary Walsh in “Veep” needed a “Toy Story” Woody in his life. Gary would be yelling at Forky, “Just receive it! I’m not getting it over here. Soak it in!” And then Forky would be telling Woody, “You need to head over to ‘Veep’ and give Gary some love.”

Now that you’ve had time to process the “Veep” finale, how does it feel to close that chapter?

It was hard. Our characters were so abusive to each other during the show, that we kind of balanced that we were crazy in love with each other. We became a family, so there was definitely a mourning process to it. Any time we can see each other, good god, I mean maybe we’ll just go to the grocery store every now and then just to spend time with each other.