Why ‘The Farewell’ Director Lulu Wang Made Awkwafina Her Lead 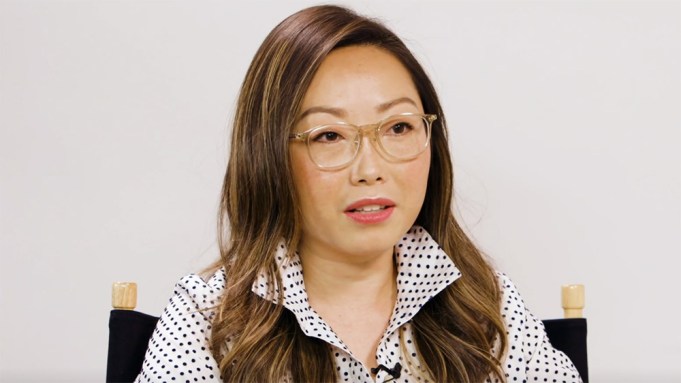 One of “The Farewell’s” most emotionally poignant scenes revolves around food. Billi (played by Awkwafina) and members of her extended family take turns plucking off morsels from shared family-style platters while debating the merits of growing up in the United States versus China.

Billi’s father (Tzi Ma) recalls one story from Billi’s childhood in the U.S.: after the family immigrated there, a stranger gave them the key to a church so she could practice on its piano, as they did not yet have one of their own.

“That,” Billi’s father says in Mandarin, “is America.”

It’s one of the many anecdotes drawn from writer/director Lulu Wang’s own life, as is the entire premise of the movie. Just as it happens in the film, Wang’s family didn’t tell her aging grandmother that she had stage-IV lung cancer and, instead, staged a wedding in northern China as the family’s goodbye to her.

But the piano is particularly important to Wang and not just because she was once on track to becoming a concert pianist.

“The piano represents so much of my relationship to my family versus to my art and to my individuality,” Wang tells Variety.

Wang’s family moved to the U.S. from China when she was 6 years old. She says her mother always wanted to give her children the chance to learn an instrument and, after settling in Miami, would bring a young Lulu to a local church to practice.

“And she did that, every single day. It became a huge sacrifice for her. When they had enough money, had a savings account, the first really expensive purchase they made was for me to have a piano,” Wang recalls.

Wang would go on to study music and literature at Boston College but pivoted away from pursuing the piano full-time, a decision she says put her at odds with her parents.

“At first, they were like, ‘We’ve put too much into this, you can’t quit.’ And the older I got, they would go a more passive-aggressive way and say, ‘Oh, you can quit. Just throw away everything we’ve put into it. Yeah, that’s fine,’” says Wang. “So I’ve always had this troubled relationship with the piano, and I felt like for Billi, too, represented everything the family had done for her.”

At one point in “The Farewell,” after much chiding from her family for quitting the instrument, Billi sits down at a piano and deftly bangs out a solo piece, a jarring aural break in an otherwise quiet story, told almost entirely in Mandarin. The tension between family duty and intrepid individualism is one explored throughout “The Farewell,” which features Awkwafina in her first dramatic role. Wang, who knew her best as the artist behind the song “My Vag,” was initially hesitant to cast the rapper-turned-actress in the role.

“[When] my producer brought her name up I was like, ‘Awkwafina, the rapper from Queens?’” recalls Wang. “‘This is who you think should play, I guess, a version of me in a drama? Are we making the same film here?’”

But it was a sense of melancholy Wang says Awkwafina conveyed in her audition tape that convinced Wang to make her the lead.

“There was a quality of both light and dark, where she’s able to make a joke but you kind of feel like, in a way, she’s doing it to mask something deeper,” says Wang.

Years ago, Wang had unsuccessfully pitched the film to producers. Instead, the story found a home in public radio form on the program “This American Life,” where it was heard by producer Chris Weitz (“About a Boy,” “Rogue One: A Star Wars Story”). During its development, Wang found herself pushing back on potential producers who pressured her to not make the film primarily in a language other than English or change some of the leads to be white. Doubling down on her vision of “The Farewell” — a film mostly in Mandarin with an exclusively Asian lead cast — was empowering, says Wang.

“I was like, ‘I can’t make a film where the grandmother speaks English ‘cause I don’t know what that’s like,'” she adds.

“The Farewell” debuted at Sundance in January and was picked up by A24. It broke the box office record set by “Avengers: Endgame” for per-screen average, taking in $351,330 in four theaters when it opened in limited release on July 12, averaging an impressive $87,833 from each location. It goes into wide release on Aug. 2.

A comedic drama that is neither a Disney remake, superhero movie or “Fast & Furious” spinoff is surely more thoughtful, understated fare for the summer box office — not that Wang, who made her first feature film, “Posthumous,” in 2014, is opposed to doing something, well, bigger.

“I would absolutely love to do a superhero movie. It just has to be the right one. It has to have the right message,” she says. “Yes, I’m putting it out into the universe. Bring me all the superheroes. Definitely female. I definitely want to do a female superhero.”