Why Stephan James Is Poised for Hollywood’s A-List 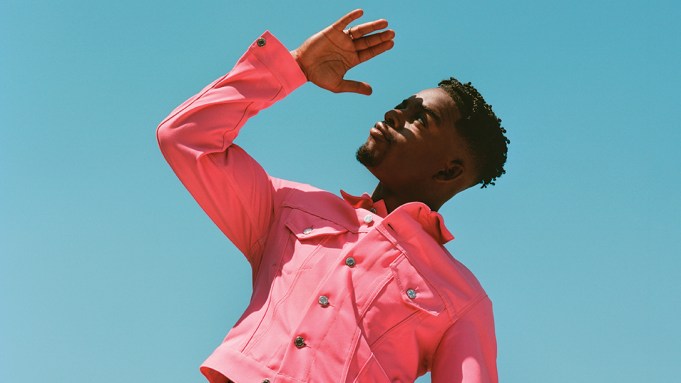 Only the brightest in Hollywood are getting an invitation to join Quibi. In the last few months, Jeffrey Katzenberg has been signing deals for his forthcoming digital venture, which will produce serialized episodes that will be as short as five minutes. Among those boarding the Quibi train: Jennifer Lopez, Liam Hemsworth, Don Cheadle and Anna Kendrick. And so is Stephan James.

It’s the latest sign that the 25-year-old actor, who had a breakout 2018 with back-to-back starring roles in Amazon Studio’s “Homecoming” (opposite Julia Roberts) and Barry Jenkins’ drama “If Beale Street Could Talk,” is a name to know in Hollywood.

“I can say beyond a shadow of a doubt he will be one of the biggest stars of the next five years,” says Joe Russo, who along with his brother, Anthony, served as producers on the upcoming thriller “21 Bridges,” out in theaters on Nov. 22. Despite playing a villain in the film, James tested through the roof in likability against the film’s lead, Chadwick Boseman.

James, who has been acting since age 14 in his native Canada, is still processing the growing spotlight on his career. He’s among the new class of Hollywood leading men, which includes Timothée Chalamet, John Boyega and Lucas Hedges, who walk the line between character actors and internet heartthrobs. In February, when James attended the Oscars, social media blew up with love letters to his stylish red suede tuxedo. And he’s been the subject of frequent online adoration all year (just look at the Twitter feed of Vulture’s resident tastemaker, Hunter Harris).

“I think I’m learning to be more present,” James says over green tea at the Chateau Marmont on a recent afternoon in Los Angeles. “Oftentimes when there’s so much happening around you, you got to remember to acknowledge the space you’re in.” He reached that realization while traveling for work last year. “I just remember being in a hotel room in Paris or London or somewhere, taking a deep breath and being like, ‘Wow. What a ride!’ I’m living out my dreams. Literally manifesting these things, and people are seeing it and appreciating it.”

The characters he’s played most recently all have a strong moral compass. On “Homecoming,” he earned a Golden Globe nomination for portraying a war veteran who begins to experience memory loss while undergoing treatment at a recovery clinic. In “Beale Street,” he’s a man madly in love with his girlfriend in 1970s New York, delivering a soulful performance that anchors the prestige drama adapted from the James Baldwin novel. And on Quibi, he’ll headline “#Freerayshawn” as another war veteran, this time grappling with a drug deal gone wrong. Laurence Fishburne will play the police negotiator attempting to lure James’ character out of hiding as the media descends on the developing scandal.

“It’s new and exciting,” James says about the series, which was produced by Antoine Fuqua. “I think we have to learn to push the envelope and to challenge ourselves on a new horizon.” Like most actors of his generation, James doesn’t care what medium he appears in. He just wants to play meaningful parts. Over a 90-minute conversation, he’s friendly but reserved. It’s a characteristic he says he’s had since childhood. In camouflage shorts and Ray-Bans, he probably wouldn’t be noticed by nearby guests if not for the setting, which is packed with stargazers sipping on glasses of rosé.

He admits to occasionally googling himself, but he hasn’t been surprised by his findings. “I’m pretty reclusive, so I don’t put my personal life out there,” he says.

To be shy was an anomaly in his childhood metropolitan town in Toronto. James was raised by his mom, a poet and a screenwriter. His older brother, actor Shamier Anderson, loved musical theater. “Seeing my brother do what he did, going to his shows, it sort of opened me up a little bit to take baby steps and then diving into what that would feel like,” James says. “I went from performing a monologue in front of 20 people in class to being in my school play in front of 500 kids. Then I got a manager.”

James started with small parts on Canadian TV shows. His first credit was for a short-lived series called “My Babysitter’s a Vampire,” and he landed a regular role at 16 on the teen soap opera “Degrassi,” where he stayed for two seasons, from 2010 to 2012. His big break in Hollywood came with a transformative role in Ava DuVernay’s 2014 drama “Selma,” where he played Martin Luther King Jr. adviser and civil rights pioneer John Lewis.

DuVernay recalls the first time she saw James, not in a live audition or a self-submitted tape but on David Oyelowo’s smartphone. “David showed me a trailer of Stephan in some indie. He had no idea who he was either, and Stephan had about two lines in this clip, and it was incredible work,” she says.

Tracking him down was no picnic. DuVernay’s longtime casting director Aisha Coley spent nearly three months searching for the actor, who had no formal representation in Canada.

“It was messy,” DuVernay says. “I thought I might have to fly to the streets of Toronto and find him myself, but his tape finally came in. He was worth the wait. I feel like he’s the best of his generation, because he can be so many things. Fiery, vulnerable, sexy, confident, humble — I’ve seen him do it all.”

“I think I’m learning to be more present …like, ‘wow what a ride!’”
Stephan James

From “Selma,” James nabbed a starring role in Entertainment One’s 2016 “Race,” as trailblazing Olympic athlete Jesse Owens, earning a best actor prize from the Academy of Canadian Cinema & Television. Some of the industry’s most high-profile directors and producers took notice.

It’s rare for an actor of any age to have projects as diverse and high-profile as “Beale Street” and “Homecoming” hit in the same year: one a deeply romantic celebration of black love at the dawn of the turbulent ’70s, the other a tense and toxic look at the modern military-industrial complex. “Sometimes my work requires me to take on a little extra baggage and go a little deeper than some other folks,” James says. “But honestly, I accept and rise to the challenge.”

Those challenges have been considerable for a young actor of color, despite the recent conversations about inclusion and representation in Hollywood. When James was growing up, there were few black male movie stars, beyond Denzel Washington and Will Smith, carrying their own films. Fortunately, that’s changing with the arrival of Michael B. Jordan, Idris Elba, Boseman and Mahershala Ali, among others.

“To say that we’ve made progress would be true,” James says. “To say that we’re completely there would probably be a lie. Certainly, there’s been a lot of strides in the elevation of diversity, and that’s not only with people of color but with women too.”

James says that he finds television more progressive than the slow-moving wheel of the film industry, and he expresses frustration with tokenism and labels for stories featuring nonwhite casts. “People will look at things like a black comedy and think, ‘This is going to be a great black film,’” he says.

“But why can’t it just be a great project that has black actors in it?” His goal is to transition to producing to “prove that there are a variety of stories that we’re capable of telling.”

For now, his next story will be the widely anticipated second season of “Homecoming,” reprising the role of Walter Cruz, who unwittingly participates in a drug trial in an attempt to erase his traumatic memories of combat. After Roberts stepped away as the star (she will remain an executive producer), Janelle Monáe was cast in a new part opposite him. James says that fans of the show typically shout out the same phrase to him, unprompted: “The fork!”

That refers to a cliffhanger scene that ended the first season of “Homecoming,” where Walter is tracked down by a counselor named Heidi (Roberts). She presumes he remembers nothing from his season-long ordeal. In the final moments of the show, Walter seems to set a fork askew on his napkin, recalling a much earlier scene in the series and suggesting he knows more than he’s letting on.

“I can’t tell you how many people have come up to me about that,” James says, laughing. “I like hearing people’s takes on it. For me, I think he recognized Julia’s character, Heidi, and her spirit in that moment, but I don’t know that he fully recognized her.”

Still, he appreciates the analysis. In another life, he might have spent more time discussing the interior lives and motives of real people instead of fictional characters on a script page. James studied criminal forensic psychology at Toronto’s Jarvis Collegiate Institute, with the intention of eventually entering the field.

“I’ve always been into why criminals do what they do,” James says. “Now with my career, maybe one day I’ll just be able to play a forensic psychologist. Any casting directors out there?”