Continue to Variety SKIP AD
You will be redirected back to your article in seconds
Jul 30, 2019 7:00am PT 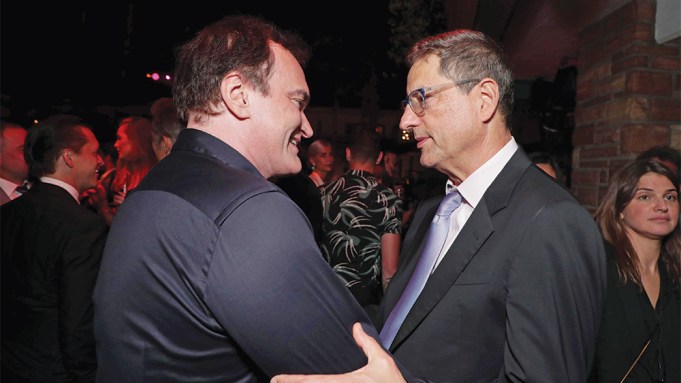 Despite glowing reviews, A-list movie stars and a singular filmmaker who inspired an across-the-board studio bidding war, Quentin Tarantino’s “Once Upon a Time … in Hollywood” still represented a massive creative risk for financier and distributor Sony Pictures.

Now it seems a risk well taken, as the studio marks a career-best opening weekend for Tarantino, with $41 million at the do­mestic box office.

To drop a two-hour, 40-minute, R-rated original movie that defies easy categorization in the middle of the summer blockbuster season was a swing for the fences, numerous top executives and industry analysts tell Variety.

“The truth is, there aren’t a lot of filmmakers out there who are creating their own original stuff anymore,” says Sony Pictures Motion Picture Group chairman Tom Rothman.

Indeed, the hotly anticipated project starring Leonardo DiCaprio, Brad Pitt and Margot Robbie contains neither a billowing superhero cape nor a singing lion in a single frame. It’s a period piece, for starters, a love letter to idyllic ’60s cinema that in true Tarantino fashion has its share of feverish violence — and a film in which the central characters’ lives intersect with the Manson Family in surprising ways. DiCaprio plays a fading television star and Pitt his loyal stuntman and gofer. The only resemblance the film does share with franchise fare is its budget.

The true production cost of “Once Upon a Time” is still a matter of great debate, though several individuals close to the project insist it was $110 million, which decreased to $90 million after Sony won a generous California tax rebate in an annual state lottery.

As Variety previously reported, Pitt and DiCaprio were each paid $10 million upfront — a major haircut from their usual quotes.

“When are you going to invest $100 million in a movie that’s not going to evolve into a franchise? That’s going to be a red flag for most studios,” says Eric Handler, a senior media research analyst at MKM Partners.

Movies aimed at adults that are not based on known underlying properties are endangered species in a business that’s primarily looking to appeal to teenagers who want escapist fare. Many thrillers and dramas are instead moving to deep-pocketed streamers, where they don’t depend on massive opening weekends to turn a profit. Earlier this month, the art-heist film “Red Notice,” a staggering $200 million project boasting a cast that includes Dwayne Johnson, Ryan Reynolds and Gal Gadot, was picked up by Netflix after Universal Pictures passed on it over budget issues.

“The Tarantino film was basically Sony indulging a great filmmaker and showing they can support him, which is important for them to do, and proving that people still want to go to the theater and see movies,” says one top film executive at a Sony rival, speaking on condition of anonymity.

Adds another exec from a Sony rival: “What we all need to remember is that anything over $30 million for the opening weekend of this movie is a huge success, and Sony deserves a lot of credit for that.” (Unlike younger audiences, adult moviegoers don’t necessarily rush to cinemas the day a film debuts. If word of mouth is strong, a film like “Once Upon a Time,” however, can play for months on end.)

Both executives say the film can earn between $100 million to $120 million domestically during its theatrical run. It will need to lean on Pitt’s and DiCaprio’s star power to draw overseas crowds. Presales for “Once Upon a Time” were the highest of Tarantino’s career, according to mobile ticketer Fandango. While mature audiences are expected over the coming weeks, the film procured a strong number of millennial males in presale purchases, notes analytics service Movio: Some 72% were male and more than half between the ages of 22 and 40, up 20% over the national average for both figures.

None of the studios that bid on “Once Upon a Time” seemed to have concerns over Tarantino’s career-long association with disgraced mogul Harvey Weinstein, who has been accused of rape and sexual assault. Nor did the director’s public feud with his “Kill Bill” star Uma Thurman, who accused him of reckless negligence regarding her safety on set, deter the script auction. (The two appear to have mended fences. Thurman posted a recent message of congratulations to Tarantino for “Once Upon a Time” on Instagram.)

Tarantino was given a significant amount of autonomy when making “Once Upon a Time” and is also one of a handful of filmmakers who can demand future ownership of his copyrights. Sources say that “Once Upon a Time” will revert to the director in 30 years, which would give him control of the print and claim to any merchandising and spinoff narratives from the original. Sony Pictures retains rights to prequels and sequels, adds one of the insiders.

Another big risk by Sony is how it chose to market the picture; from day one, it downplayed the Manson angle — a heinous true crime in which pregnant “Valley of the Dolls” star Sharon Tate and hair-care and -styling guru Jay Sebring were brutally murdered by followers of Charles Manson in the Benedict Canyon house that the actress shared with her husband, director Roman Polanski.

The marketing team chose to de-emphasize the historical events that form the movie’s backdrop, and instead run a huge outdoor ad campaign of character posters featuring the lead cast and select cameo players (the late Luke Perry, Al Pacino and Mike Moh, who stars as Bruce Lee in the film).

Even a pit bull mix named Sayuri, who plays Pitt’s dog, Brandy, appears on one-sheets in bus shelters and bookstore windows around L.A. But Damon Herriman, the actor Tarantino cast as Manson, is glimpsed for only a split second in trailers.

The omission is by design. The film’s twist ending has been teased since the movie played at the Cannes Film Festival, though many supportive journalists and stars have kept silent to preserve the experience for the public. The project also has reached out to the families of the Manson victims, inviting Tate’s sister Debra and Sebring’s nephew Anthony DiMaria to set.

“The fact is that there’s a real breadth to this movie,” says Shannon McIntosh, longtime producer for Tarantino. “It’s a personal story to Quentin, and it’s about his time growing up and his memories from that era. So we decided that not going to the dark side, but seasoning the campaign with just a bit of it, was best.”

Sony also wisely abandoned its initial plan to open the film Aug. 9, which would have represented the 50th anniversary of Tate’s murder.

For the studio’s part, Rothman says he values the experience “win, lose, or draw,” and hopes to continue the creative relationship.

“This doesn’t come along every day,” says the Sony chief. “It’s the work of an exceptional imagination and artist, with an exceptional cast. That combination is very hard to come by.”