Laura Dern and Sterling K. Brown on Being ‘Siblings in Having Meltdowns on Television’ 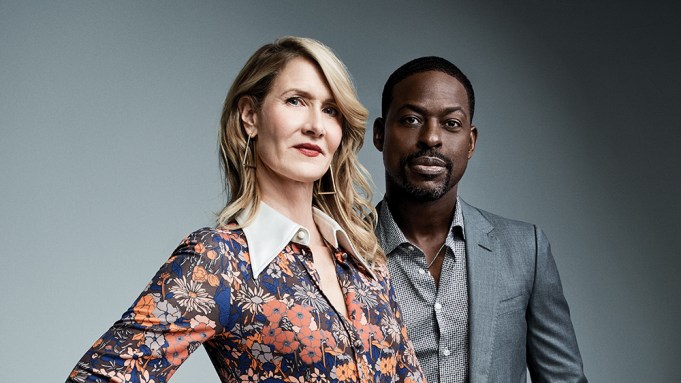 Sterling K. Brown, an Emmy winner for “The People v. O.J. Simpson: American Crime Story” and “This Is Us,” is in the Oscar mix for the first time thanks to his deep and emotionally acute performance in “Waves,” as a father whose obsessive attention to his family masks fear and trauma. Laura Dern expresses no such lack of confidence in “Marriage Story,” where she plays a hard-driving divorce lawyer who’s uncompromising about helping construct a narrative for her client (Scarlett Johansson). It’s only the latest high point in a career renaissance kicked off by Dern’s role as alpha Renata on “Big Little Lies.”

Sterling K. Brown: In “Marriage Story,” you had a femininity, you had a gentility. This was your job, and you are unapologetic about your job. Talk to me about how you found your way into this character.

Laura Dern: I had the great experience, privilege and cheat of Noah Baumbach, our writer-director, being my friend. For a year or so he was writing, and started having meals with myself and Adam Driver and Scarlett Johansson eventually. I felt so inside the story from the intimacy of watching him build this film.

Brown: So your voice was in mind as he was constructing.

Dern: Yeah. Our voices were in mind, not knowing what parts we’d play. But eventually, he wrote this ridiculously delicious role — wonderfully complicated in the way you described, in that she is fierce and very in control and utilizes her femininity and her ferocity to strategize her win. But it’s also calculated and terrifying, as is the business of divorce. So there’s heartbreak amidst what was fun for me as an actor.

Dern: I loved learning that she’s right despite my distaste for her business. I loved that, amongst the cast and crew, we’d all had various experiences, and been a player in that story somehow. And so the business of divorce is traumatizing for most people working on the movie. I had some distaste and fear of playing her. But this amazing monologue he wrote for me, that made me discover that she’s so right — and that’s her strategy, to protect women and give them a voice in a place they’re not acknowledged — that was amazing fun.

Brown: You’re talking about how women are not allowed to be imperfect, especially as mothers. There’s that double standard in terms of how fathers can be seen and how mothers need to be seen.

Dern: There’s always a double standard for all of us, as you experience in your film. I was so moved by this devastating story. The role of a man holding the responsibility of making sure your son never has to be wounded in the way you were? That just killed me. I’d love to hear how that felt for you as an actor, but also as a father.

Brown: You want to shield your children from the slings and arrows that life can hurl at you. And in the back of your mind, you know they’re going to have to go through it anyway. I have two young boys. I’m raising a young man and a young girl in this movie — but with his son, recognizing that just being young, black and male is a threat in and of itself, there’s a desire to see him survive first and foremost. It’s like a vise grip sometimes. He’s lost in his life. He has these two children that he has to raise by himself for a period of time. And for a man, that’s a really unique position to be in. So all the more intensely he holds on, because of that fear that things can be taken away from him.

The model of masculinity is not about sharing or confiding, so he feels as if he has to deal with it alone. I hope, in real life, as a parent, I create the space for my sons to come to me and say, “Dad, I’m having trouble. I need help.”

Dern: I was so moved by who you are later in the film with your daughter as you tell her you’re worried about her and give her room to share her feelings — it makes me want to cry. It was so beautiful to watch you have incremental growth through heartbreak, to be available in your brokenness. What were those thoughts about where to start and how to get to an entirely other kind of parenting?

Brown: You just made a black man blush. You can’t see it. It’s happening right now. So let’s see. Tragedy happens, and I think a lot of times we have insight. We have evolution that either transpires through tragedy or through epiphany, right? You hope for epiphany more often than not, but oftentimes it takes something really tough to hopefully illuminate a new way of being in life. There’s a recognition that holding on with the vise grip that he had with his son may not be the only way of being for your children.

And it’s also born out of necessity. There’s no cruise control that you can press on any relationship. Whether it’s a romantic relationship or father-son, father-daughter, it needs attention. It’s almost an embarrassing moment for him, but his daughter gives him permission with her generosity.

Dern: Your vulnerability and your willingness to be both men in that struggle of what it is to be a communicator as a parent — it’s cool as an actor, but it cracks through, and you want every kid and parent to see this.

Brown: Bless you. Let me segue to a first impression that I have of you. I’ve met you on a couple of occasions, in passing. And you strike me as the kind of person who is incredibly comfortable in their own skin. I’m wondering how long have you lived that life, or am I putting something on you? You seem fearless. The choices that you make as an actor — you’re not afraid to be very big. As Renata: “I’m not not going to be rich!” It’s a whole mood. But some people are afraid to let it out there. How long did it take to become Laura Dern? Because I want to be like that.

Dern: If I am fearless like that as an actor, that it might only be matched by my fearfulness as a human being. It’s my shadow side. But I am growing into my own skin. Being a woman is amazing. I started making movies as an 11-year-old, and so becoming an adult actor is an amazing feeling because I’ve been raised by all these filmmakers who forced me to dive into the deep end. Complicated, amazing, fearless filmmakers who would create insane circumstances or worlds — but ask me to be incredibly honest in it, or have something simple and honest, and asked me to be radically insane in those worlds. And so I think that’s where you get your bravery. And my parents [Bruce Dern and Diane Ladd] are incredibly fearless, beautiful actors, and I watched them be fearless in areas and fearful in areas.

Brown: Did you always want to do it?

Brown: And it wasn’t them pushing you?

Dern: Oh, no, they didn’t want me to. My mom discouraged me, because as a woman in the film industry, she was worried for me, especially as a child. And my dad assumed I’d find something else interesting. But I went into the family business, and playing these wildly cracked-open people are the greatest time you could ever ask for. I think we’re siblings in having meltdowns on television. I think we can own that. Between “This Is Us” and “Enlightened” and “Big Little Lies,” we’ve probably together had as many meltdowns as should be allowed.

Brown: I think there’s something about this profession where you get a pat on the back for expressing a multitude of ways of being in life that if you actually walked around in life, people would be like, “Are you OK?” And so you don’t have to carry it around with you. I get a chance to let all these different personalities that exist within me out at different points in time, and therefore I get a chance to make peace with all of who I am.

Dern: We recognize ourselves in these characters. Thank God there’s some release. If people love these characters, then they give themselves permission for more humanity.