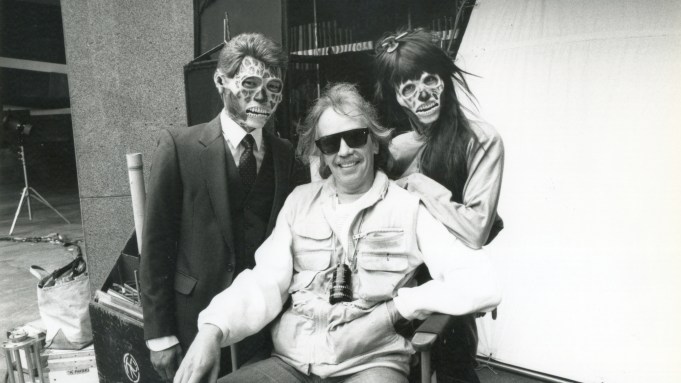 John Carpenter’s career in Hollywood was nearly over before it started.

In this exclusive one-on-on interview with the horror/sci-fi director, he talks about finding respect later in his career. So much so that the filmmaker was asked to lead a Masterclass at this year’s Cannes Film Festival, where he also received the Golden Coach Award, given to those who brought innovative qualities to their projects.

After several critical and commercial failures in the 1970s, he struck gold with “Halloween” in 1978, kickstarting the slasher genre and a franchise that has lasted 40 years. Eventually, fans began retroactively heaping newfound love onto many of his other films, like “The Fog,” “Assault on Precinct 13” and “Escape From New York,” and have turned them into cult classics.

However, despite being known as one of the kings of cult phenomenons, Carpenter said he’s unfamiliar with the term. “I have no idea what it means. I’m clueless,” he told Variety’s Jenelle Riley.

After studying film at the University of Southern California, Carpenter dropped out to turn his sci-fi student project “Dark Star” into his feature film debut in 1974. The result? Almost completely negative reviews from the press, including a downer from Daily Variety that still sticks with Carpenter.

“I remember sitting in a coffee shop, opening Variety and ‘Holey moley,’” he said. “I have a few critics I’d like to spend just five minutes with in a room alone. I’d like a little payback.”

Since its release, “Dark Star” has joined the list of Carpenter’s movies that were redeemed years later as cult classics, just like “The Thing” from 1982. Starring Kurt Russell, the horror film shocked audiences with repulsive special effects used for the titular, shape-shifting monster.

“‘The Thing’ was a bomb. Fans hated it, critics hated it. They thought I showed them too much of the monster. You just don’t do that. Only if you’re a low-rent director, like me, do you show the monster. You’re supposed to hide it in the shadows,” Carpenter said.

Critics have since changed their tune on “The Thing,” hailing it as a seminal horror movie and praising its themes of paranoia and mistrust in the Cold War era. Its influence can be felt in other horror movies and shows, like “The Mist” and “Stranger Things,” and Universal Pictures released a prequel of the same name in 2011, though that Carpenter-less movie has yet to bounce back from its mostly negative reviews.

Hindsight has been kind to Carpenter’s films, but he said it’s impossible to predict how a project will turn out and most end up mediocre. “Christine,” the 1983 adaptation of Stephen King’s killer car novel, was the director’s only movie to be better than he anticipated.

“I needed a job after ‘The Thing’ because nobody would hire me. So this came along and I took the job, and it turned out better than it had any right to. We discarded one element of Stephen King’s story, which was the ghost of the owner would sit in the backseat. I thought that was a bit cheesy. I don’t know, maybe I made a mistake, but it turned out okay,” he said.

The 1988 sci-fi cult classic “They Live” dove deeper into political themes. In the movie, grotesque aliens disguised themselves as the ruling class and manipulated humans to spend money through subliminal messaging.

“‘They Live’ was a cry against Reaganomics. I just watched my country turn to the right. I couldn’t believe it after all we’d been through that Reagan got elected. It was a scream against yuppies, greed and all that ‘80s mythos. The bad guys were aliens, but they really were kind of bankers and Republicans,” Carpenter said.

In addition to directing and writing, Carpenter has also served as a composer for many of his films, which was originally a way to save time and money as a student. He crafted the chillingly iconic “Halloween” theme with a synthesizer and popularized the instrument as staple for horror movie scores. Carpenter’s composing credits nearly equal his directing ones, and he’s released four full-length albums since 2015.

He even edited a few of his early films, and has a meticulous eye for errors. Unhappy with the original cut of “The Fog,” he went back and recut a large portion of the movie until he was satisfied. As his own biggest critic, he said he doesn’t want to rewatch any of his films.

“I’ll say, ‘What was I thinking in that scene? Why did I do that? That’s stupid, why did I put the camera there?’ I’ll go through a blistering critique of my own directing,” he said.

After his nearly 50-year career in filmmaking and his status as a cult-movie legend, Carpenter said his greatest accomplishment is “surviving” in Hollywood.

“Just getting these movies to release is a big deal. When I was a kid, I decided at one point I wanted to be a movie director, and I got to do that. A lot of very talented people never got the chance to do that. So I’m really lucky,” he said. “Don’t lose yourself, no matter what happens. Keep in touch with who you are when you start because a lot of things happen to you, success and failure both.”