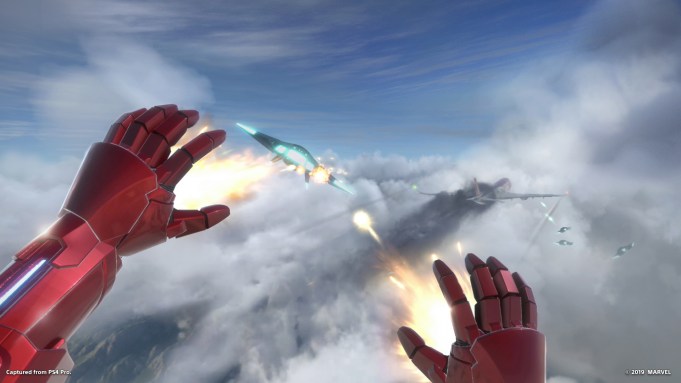 Iron Man is a perfect fit for virtual reality. The helmet, the physicality of his powers, the embodiment of his armor, they all lend themselves to a VR experience.

While “Marvel’s Iron Man VR” is proof of that, creating an authentic experience required nailing one iconic visual, and it wasn’t easy.

“One of the things that we had to start from scratch over four times was the HUD,” said Ryan Payton, founder of developer Camouflaj. “The first HUD wasn’t good enough. The second HUD wasn’t good enough. It wasn’t until the fifth one where we really sort of felt like that 3D, that parallaxing was there and you get that real sense that you’re inside the helmet.”

It’s a stunning moment, a sort of one-to-one feeling when you slide on the PlayStation VR headset and are suddenly inside Iron Man’s helmet. As with the movies, when the helmet boots up you see a sort of faint blue flickering that outlines the interior contours of the face plates. Then a HUD appears, floating just inside your view without blocking the world around you.

Payton said the team spent a lot of time dissecting how the “Iron Man” movies created the HUD to make their virtual reality version.

While “Marvel’s Iron Man VR,” a PlayStation VR exclusive, doesn’t have any official narrative ties to the Marvel cinematic universe or the comics, the team is working closely with Marvel to make the game.

The concept came out of a meeting at E3 in 2016 after Insomniac’s “Spider-Man” game was announced, Payton said

“Jay asked if we would be interested in working on a VR game,” Payton said. “We came back a few weeks later and said, ‘Hey, we would love to work in VR with Marvel as long as we can work on Ironman because it’s the perfect melding.’”

Payton said VR and Iron Man are such a good fit because of the core fantasy of being inside Iron Man’s suit and wearing his helmet.

“Even his pulsars are a perfect analog to the PlayStation Move controllers,” he said. “You can fly around. You can shoot with those controllers and you’ve got the helmet, which is like an analog to the HUD from the films.”

Ryan Darcey, a designer at Camouflaj, said that the team created an in-house prototype to test their idea.

“The very first thing we started to do was trying to figure out how to fly because we knew that was going to be the most challenging thing and we knew if we couldn’t get that then we were never going to make the game the way we wanted to make it,” he said. “We didn’t want it to be on rails, we wanted it to have 360-degree movement.”

Payton said once they nailed the movement, they decided that they didn’t want to do what he called a “linear amusement park ride” that was only a few hours.

“We wanted to make a full game that actually gets into the area that I’m more interested in, which is the story side of things,” he said. “Tony Stark is his own worst enemy and I think that’s a really interesting story to tell.

“So with this game, we’re building a really big VR game that’s not only big action set pieces, open spaces where you can fly anywhere, but also pairing that with a really deep and personal story where you play as Tony.”

In a demo shown off to press in New York City earlier this month, Camouflaj let press check out the game’s opening tutorial and then play a mission in the game.

The experience was sublime. The HUD really captures the experience of being inside the armor, making the player feel like a superhero, and the controls are perfect.

The Move controllers guide Iron Man’s hands and arms. To fly, players need to use the thrusters in the palms of his suit. That makes the controls very intuitive, allowing players to control their speed and much of their direction with bursts from their palms. Firing weapons is also very straight forward. The main weapon — also the only one made available in the demo — are his palm pulsars which you use simply by aiming your palm at an object and pulling the trigger.

The tutorial has players fly through a number of rings to get used to flight controls and then shoot down practice targets.

The single mission, interestingly, opened with the player not as Iron Man, but as Tony Stark. There’s a bit of interaction in that opening moment, with Stark interacting with Pepper Potts and his AI, but then the game quickly drops you back into Iron Man’s suit, literally.

The free-flying and combat is so well designed that you quickly forget about the how and are able to focus on the tactics and requirements of the mission.

Darcey said that what was shown was designed to give a sense of the game’s full campaign and action. What it didn’t show was a third component to the game: Stark’s garage where players will be able to tinker with the suit and develop new weapons.

Those new weapons can be attached to Iron Man’s arms and fired by bending the hand down, instead of up, to do things like shoot rockets.

Payton noted that the team worked with Marvel to come up with a brand new suit design from the ground up.

“We looked actually back to the 1979 Bob Layton Iron Man,” he said. “His was a little more rounded and he had a red suit and gold arms and gold legs. And we actually looked at that as a core inspiration, but then we modernized it.”