The Big Twist M. Night Shyamalan Needs: He Should Stop Writing His Own Scripts (Column) 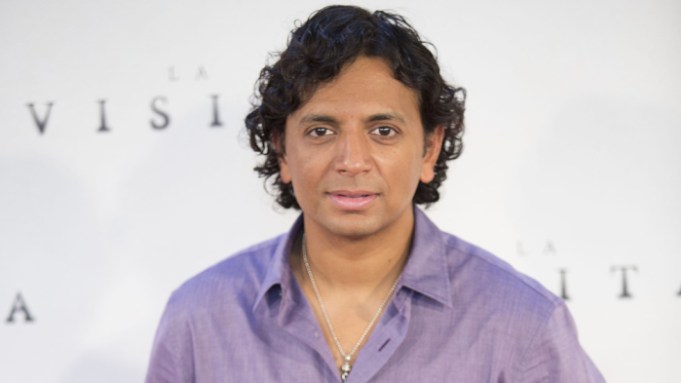 Quick, name the greatest film by each of the following directors: Alfred Hitchcock, Steven Spielberg, David Lean, Robert Altman, Roman Polanski, Kathryn Bigelow, Jonathan Demme. Answers will vary (mine would be: “Psycho,” “Saving Private Ryan,” “Lawrence of Arabia,” “Nashville,” “Chinatown,” “The Hurt Locker,” “The Silence of the Lambs”), but whatever your taste, odds are that the movies you chose were not written by the director in question. (On my list, none of them were.)

There are, of course, countless great writer-directors — Ingmar Bergman, Preston Sturges, Quentin Tarantino, you name it. So it’s not as if it has to be one way or the other. But the point of my little exercise is that the history of cinema is brimming with directors who are towering artists, who ruled and stretched and defined the medium, yet did so without ever claiming to be screenwriters. A few of them dabbled at it, at times effectively (Spielberg, for instance, wrote “Close Encounters of the Third Kind,” which I would call his second greatest film), and just about every director worth his or her salt is probably, on the set, doing some version of what amounts to rewriting. But you get the point. The fact that you’re a virtuoso film director doesn’t necessarily mean that you’re a virtuoso crafter of words.

Which brings us to M. Night Shyamalan. In my review of “Glass,” his sequel to “Unbreakable” that’s also a sequel to “Split” (and yes, he hog-tied those movies together in the final minutes of “Split,” but come on! Until that moment, the two films had nothing to do with each other), I wrote that Shyamalan “may be the most gifted director of the last 20 years to see his own name turn into a punchline.” I refer, of course, to the way his twist endings became a signature that devolved into a tic that began to inspire a collective eye roll, but my point wasn’t just about the twists. Shyamalan is a major talent who is not, in the end, a virtuoso. He’s a delectably skilled craftsman, and when his mojo is working (“The Sixth Sense,” “Unbreakable,” parts of “Signs” and “The Village”), he’s an entertainer it feels gratifying to be in the hands of.

Yet given the stature, the power, the brand, the trademark name recognition he achieved in his heyday, it’s not as if he went on to have some awesome track record. He hit the sweet spot with “The Sixth Sense,” which was supremely well-directed if highly derivative (I always thought of the Haley Joel Osment character as Danny Lloyd from “The Shining” meets Demi Moore in “Ghost”: A kid who can see dead people who are nice!), and some of us think that “Unbreakable” is his most satisfying film. But after that end-of-the-millennium one-two punch, his movies began to feel at once top-heavy and threadbare, and I think there are very few viewers who would seriously dispute that.

What happened? Did Shyamalan, once he became a force in Hollywood, turn into a worse director? In a sense, you could say he did. But that’s because he was taking orders from someone who wasn’t doing him any good. The name of that person was M. Night Shyamalan, screenwriter.

Shyamalan has now directed a total of 13 features, and with the exception of “After Earth,” the soggy post-apocalyptic adventure curio he made in 2013 with Will and Jaden Smith (Will Smith was credited as one of the screenwriters, along with Shyamalan and Gary Whitta), he has written the script for every last one of them. To put it bluntly: That’s a very tall pile of mediocre screenwriting trying to stretch itself into something higher.

It also represents a great deal of willfully armored and glorifying self-belief. M. Night Shyamalan clearly likes generating his own projects, and he’s invested in thinking of himself as a singular entertainment auteur. That’s the way he rolls. And though he spent a number of years in the weeds, “Split,” his 2016 thriller starring James McAvoy as a chatterbox psychopath with 24 personalities, marked a resounding commercial comeback. I confess, though, that I wasn’t crazy about it. I wanted it to be terrific, and it was problematic. “Split” had a great character (and a great actor to play him), but it needed a more shrewdly sculptured story. Even the character wore out his welcome.

I don’t begrudge Shyamalan his success; I’m seriously glad he’s back. Yet “Glass,” if you think of it as the second film of Shyamalan’s second act, is far from a sophomore triumph. I thought it was competent and watchable but lacked the enigmatic aura of haunted discovery that made “Unbreakable” indelible. And while the film’s $40 million opening weekend puts it snugly in the profitable column (it testifies that the Shyamalan name is still a draw), it’s telling that the movie, given its pedigree, was expected to do better. It’s also been savaged by more than a few critics, who saw too many shades of his old tricks. They’re probably being too hard on him — “Glass” isn’t terrible, it’s just so-so — but the curse of the Shyamalan screenplay is built into it. The story is transparently cobbled together. It’s like a Tinker Toy designed to connect this and that, but that’s not the same thing as a supernatural (or superhero) tale that casts an honest spell.

That said, it’s hard to escape the feeling that Shyamalan, who is now characterizing “Unbreakable,” “Split,” and “Glass” as a trilogy, may be emboldened to extend the franchise. Surely he must now be dreaming of the far-reaching possibilities of the MNCU (the M. Night Cinematic Universe). All of it to be written by him.

Imagine if you will, though, an alternate reality, one in which he lays aside his ambitions as a writer and seeks, simply, to direct. Think of the possibilities of collaboration! We’ve never been able to picture them clearly, because Shyamalan has never indulged in the luxury of directing a movie that wasn’t based on his (catchy) (gimmicky) concepts and (decent) (functional) dialogue. Yet his talent as a director is gold. In his best films, he displays the essential moviemaking gift that fuses rhythm, character, mood, and visual storytelling. He has the instinct for how to frame a shot so that it’s the cinematic equivalent of an enthralling sentence.

Imagine that he was working, for the first time, with a fantastic screenwriter. He could redefine his career and make a movie that might blow us all away. That’s what he’s always been set on doing. But message to M. Night: It isn’t working — or, at least, it hasn’t for a long time. Not really. So why not try something else? Let someone else’s words, and even someone else’s ideas, liberate you into being the director you’ve always been, minus the screenwriter you think is lifting you up but is really tying you down.