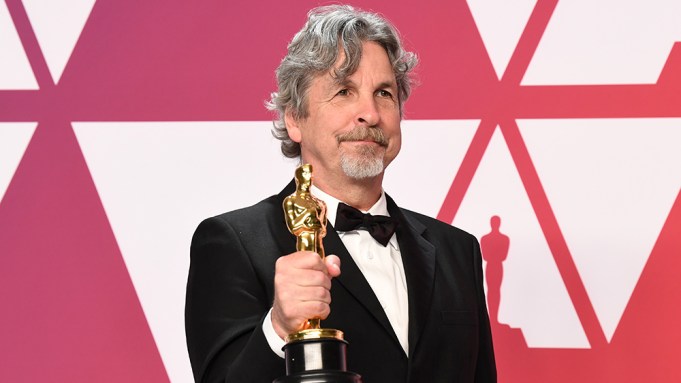 It’s not unusual — in fact, it’s often the standard drill — to see Oscar night come down to a duel between two best-picture contenders, each of which embodies a dramatically different set of values. At the 1995 awards, “Forrest Gump” vs. “Pulp Fiction” incarnated the tension between mainstream Hollywood and a newly powerful indie-film insurgency. In 2009, “The Hurt Locker,” in its implosive virtuosity, was a gritty doomscape of war that became the lowest-grossing film ever to win the Oscar (it forever squashed the idea that a best-picture winner had to be a major hit), while its principal competitor, “Avatar,” was the eye-popping 3D fantasy thrill-scape of the future: as much of a ride as “The Hurt Locker” was an anti-ride. (That the films’ respective directors, Kathryn Bigelow and James Cameron, had been married to each other and then divorced only added to the divide-and-face-off symbolism.)

Whenever there’s a pointed showdown at the Oscars, it tends to be of the smaller-vs.-larger, indie-vs.-mainstream, art-vs.-spectacle variety. So at this year’s Oscars, when it became more and more clear, as the evening wore on, that the best-picture prize would almost certainly come down to a contest between “Roma” and “Green Book,” one’s initial thought was that this was a quintessential clash between alternate movie value systems. And that’s just what it was, but with a highly paradoxical qualifier: In this case the insider was the outsider, and the radical upstart was the infinitely more conventional choice.

“Green Book,” set in 1962, is a feel-good liberal buddy movie that’s like a cross between “Driving Miss Daisy” and “Rain Man,” and 20 years ago, it would have been a slam-dunk Oscar triumph. But it came up against a newly purist and progressive mind-set, one that said, in essence: If you take a white character’s struggle and make it the moral/spiritual “equivalent” of a black character’s struggle, you’ll be saying that the pain of the oppressor is equal to the pain of the oppressed — and that, in itself, is a racist lie.

As someone who believes that “Green Book” is a powerful, moving, and emotionally complex film, I’d push back against that argument by saying: The movie isn’t equating the experience of black oppression and white blindness. It’s saying that they co-exist in the world — and that for the purposes of this movie, it will give them equal screen time. But my point here is not to re-fight that fight; it’s simply to say that “Green Book” is a film that got transfigured in the culture. It started off as unabashed liberal comfort food; it ended up as a movie that divided as much as it united. It became a political hot potato, and so voting for it wasn’t simply like pulling the lever for “Driving Miss Daisy” or “Rain Man” — for the kind of intimate and uplifting relationship-of-opposites heart-tugger that has often triumphed at the Oscars. Voting for it became, at least for some Academy members, a political act in a different way: a knowing defense of what’s left of the Hollywood status quo. It became a rebellion against the rebellion.

You could say, of course, that the victory of “Green Book” came down to one elemental thing: A lot of people in the Academy really loved “Green Book.” Fair enough. But my point is that its win last night still played as an upset, as the triumph of the underdog. How could it not, when “Green Book,” by the time Oscar night arrived, had been battered by so many storms and scandals? The N-word flap, the Muslim-tweet flap, the Peter-Farrelly-used-to-flash-on-the-set flap, the fact that the film’s box-office performance never quite lived up to its billing as a “crowd-pleaser” — individually, each of those elements dinged the movie, but what became meaningful was the way they converged with, and seemed to reinforce, the criticism of the movie: the idea that there was something questionable about “Green Book.” That its win came off as a surprise was the sign that it had become less a mainstream juggernaut than a giant killer.

The giant, of course, was “Roma,” and how spectacularly counterintuitive was that? Had “Roma” won best picture, it would have been the first foreign-language film to do so, but beyond the question of subtitles there has never been a movie as art-house as “Roma” that arguably found itself in the position of being the Oscar front-runner. When I wrote words to that effect in an earlier column, a lot of readers pushed back by saying, “You’re nuts! What about ‘The Artist?'” But seriously, there’s no comparison. “The Artist” was a bauble, a cineaste curio, a moonstruck homage to silent film and “Singin’ in the Rain.” In a sense you could say it was “arty,” but “Roma,” from its opening shot, presented itself as a rarefied aesthetic object, and the rapture it inspired was of the most high-toned sort.

It became the most ecstatically acclaimed motion picture in at least 20 years, topping more 10 Best lists and year-end critics’ awards, and being declared a “masterpiece” more ardently and often than any film since…well, it’s hard to think of a comparison. In America, it evoked mythic themes of immigration, the struggles of women, and the class system that spoke directly — unlike “Green Book” — to the social-justice currents of our era. And the campaign by its distributor, Netflix, to win “Roma” the Oscar for best picture was conceived not simply as an awards-season marketing blitz but as the kind of all-stops-out mission that once defined the campaigns of Harvey Weinstein.

But there was an elephant in the ointment, a central contradiction in the campaign. I’m one of the few critics who isn’t over the moon about “Roma” (I like it well enough, I just don’t love it; I find it at once absorbing and remote), but I certainly acknowledge that the movie is an awesomely pure and uncut act of cinema. And that’s what Netflix was pushing: “Vote for ‘Roma,’ our masterpiece for the ages!”

I can’t pretend to dive into the heads of Oscar voters and speculate as to how many of them refused to vote for “Roma” as a way of not voting for Netflix. But what I will say, with some confidence, is that for years, a lot of Academy voters have watched a lot of Oscar-nominated films in their own living rooms (there’s a theory that that helped “Shakespeare in Love” 20 years ago: It arguably played better on TV than “Saving Private Ryan”). And “Roma,” with its anecdotal quietude, its God’s-eye panoramic vistas and softly hypnotic silver-nitrate Mexican imagery, is a movie that plays infinitely better on the big screen than it does at home. On the small screen, its lack of dramatic momentum (that’s how I’d put it) becomes more of a problem.

Netflix worked a magic trick with “Roma,” transforming this meditative memory play into a global phenomenon, as well as an Oscar force to beat. And it did win three of them! But Netflix was going for the big enchilada, and what may finally have hurt the film at the Oscars was, irony of ironies, the very appeal of Netflix: the cozy belief, almost an ideology, that watching a great film at home is all the fulfillment you need. That belief has propelled Netflix to a special place in our culture, and it helped to propel “Roma.” But in a topsy-turvy year, it also helped to kill the giant.